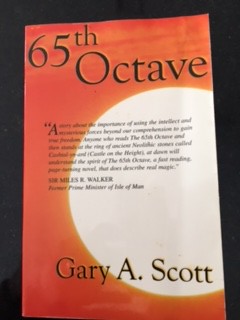 The first realization that he had been found was a tickling at the throat, something like a severe reaction from an allergy.  The black leatherette chair where he was sitting at Miami Airport suddenly felt unstable.  The olive pattern of squares in the departure lounge carpet became fuzzy in his vision. The yellow orange pillar next to him seemed to tilt and sway.

Clague knew at that moment that he might die here instead of at home. This saddened him for an instant.  He had been away for so long.  Even though the journey had been vital.  Even though he had to pass on the book, he wanted to see home one more time.

Was it too much to sit again in the rough beauty of the Tayside, the heather moorlands in the Angus Glens, the upland heaths, and their mosaic of peatland, grassland and montane habitats simmering clear in a crisp air?

The tickling grew into an inability to speak and difficulty in breathing as his throat tightened.  He knew there had been no peanuts and he carried no allergies anyway.

“Why couldn’t they have just left this until I got home?”  The 9:10 British Airways flight to Glasgow via Heathrow was only an hour from boarding and a 14 hour flight.

Couldn’t they give him that little time?  He could do them no further harm.

Yet even as his ability to remember began to slip away, he did still know that the Controllers had no compassion. Not a shred of it. There would be no saving grace for him this day.

He looked down and in his dimming consciousness saw the blue cyanosis from lack of oxygen already setting into his fingers.  His brain cells would start dying in just minutes.  He began to feel distracted and confused, but one burning question remained. “Did they know I have delivered the book? And if so, to who?”

Passengers strolled by unaware.  “Should I let them know?  Maybe if I fall off the chair.”

But the old Scott was now having difficulty explaining to himself why he should want to be saved or want to be home. He could make no decision.  “Should I just sit here or fall, he asked himself?”  He could not decide.

A man walked up, stopped and looked at Clague. Was this salvation?

Then the man sat down into the chair next to him.  “Tell me where you hid the book and I’ll ease the pain, even let you live Clague.”

Now Clague knew he was going to die here at the airport but he suddenly was not as sad. “My sacrifice hasn’t been wasted at all”, he managed to think.

“Tell me now Clague,” said the man as he dug strong fingers into Clague’s arm.   But Clague’s arms were already beyond pain. They registered just a tingling but he garnered enough strength to turn his head even as his neck stiffened.

He smiled at the man and said just three words “Fuck you laddie”.

“They don’t know that Laddy MacAllen has the book… not at all”.  This thought made his last glimmer of consciousness light as he slipped away into the deepest darkness of all.