I have sent this message scheduled for tomorrow a day early because for the past 16 years, December 1st has been a significant stock market day!  Our world turned upside down when, on December 1st, 1999 the dot.com bubble burst.  As you will see below it was then not until December 1, 2010 before the Dow was back to that all time high to stay.  Or was it?  Read below:

Stock markets have their ups and downs.  After the dot.com bubble recovered, starting in late 2007, the real estate bubble popped.  Many Americans saw their homes slide underwater, their stocks plummet and the value of their savings collapse to zero return.  That financial ruin was created by banks that were “too big to fail” pushing shares that they were selling short and were poor value.

Now as stock markets reach all time highs, another debacle is rising.  The tremors have already started, aftershocks from 2009, that have potential to create another landslide of a greater magnitude.  The “Too Big to Fail” may be leading us into tragedy again.

A number of readers have been asking me if its time to sell their shares in the US stock market.

First, I remind them that no one can ever get in right at the bottom or sell right at the top, all the time.  Personally I have not been investing in US shares for years and this has served me well.

The great value investor, Benjamin Graham, devised the metaphorical figure “Mr. Market,” whose mood swings — from euphoria to misery — determined stock prices.  You don’t have to trade with Mr. Market when he wants to, but only when you want to.

I don’t want to be buying anything when the sellers are asking for top dollar as they are in the US right now.  I just keep buying into good value markets where there are bargain basement prices.  I do not care about these ups and downs in the US.  Some really good markets (like the UK and China) are selling at near half the price to book of US shares.

Shares represent ownership in real businesses. The real value of those businesses don’t change thousands of times a day.  They don’t suddenly rise dramatically just because of what people think the next President will or will not do.  The price of the shares change, but not the value so sometimes the price is a good value and sometimes not.

Eventually this reality of economic value shows through.  The question is only one of time.

Sticking to the value logic is so much easier to live with than trying to guess if the market will rise more or fall, especially since we are all at risk of a “Behavior Gap”.

The 100 year chart of the Dow Jones Industrial Index below from Macrotrends.net provides a clear warning, “No great crash has started except from an all time high market index”. 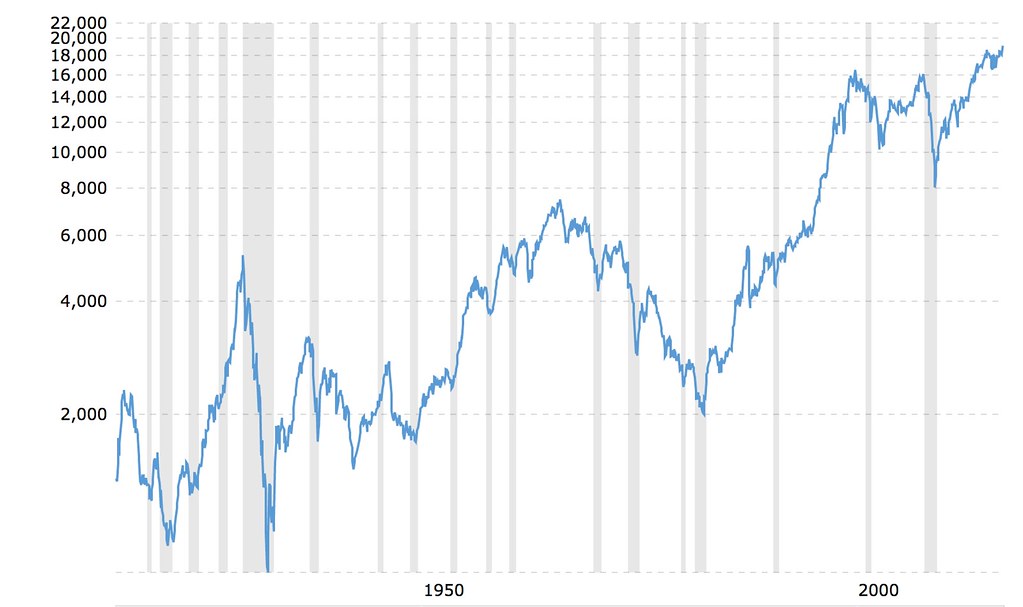 Let’s look at a more recent chart to put this in perspective. 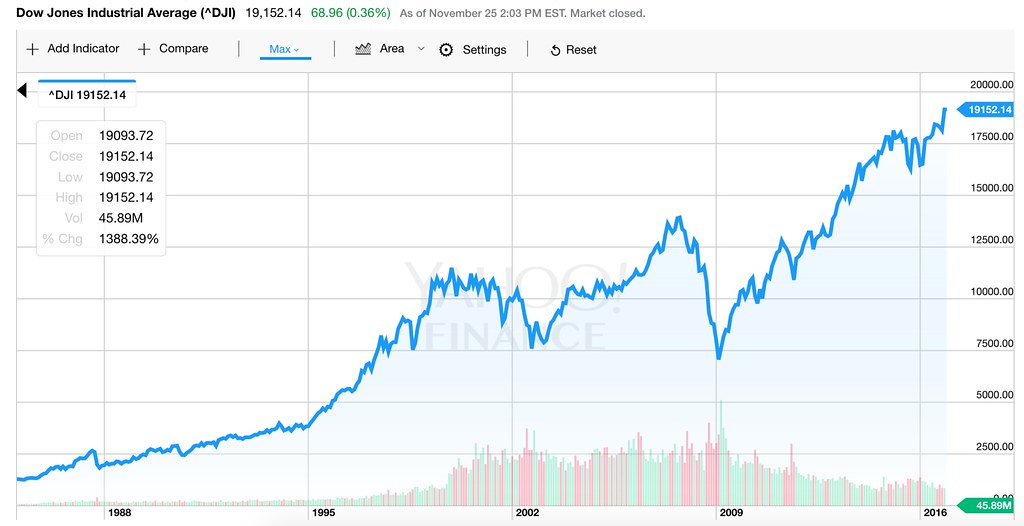 The question though is “How do we do individually as investors?”  Most of us don’t invest and hold for these periods. Most of us sell our winners too soon and hold our losers too long.  This is among the worst times to invest since periods of high performance are always followed by periods of low performance.

In 2013, US stock started to accelerate and for four years we have seen the DJI Index rise above its last all time high in the 13,500 range.   The index is up almost 50% in this period.  We must ask, “Has the real value of these businesses risen that much?” or perhaps the price has outstripped the value.

Perhaps tomorrow, since December 1st seems to be such a pivotal day, we’ll know more or at least in the month ahead.

The question that’s bigger than “how we do?” is “how we feel?”

The behavior gap means most investors get a lower return than indices because the pain of loss is about twice as motivational as the joy of gain.  Most of us are not good at investing.  Human nature seeks pleasure and avoids gain.  Because we are taught from early on that loss is painful, we react poorly when the price of investments drop.  The potential of double pleasure is needed to overcome the fear of pain, so it is natural only after seeing the prices of investments rise for an extended time.

So next time you are thinking of what to invest in, instead of asking, “Will the market rise or will it fall?” ask  yourself instead, “Will I be comfortable long term with that?”

This is why we started the Purposeful investing Course (Pi).  Pi shows an easy way to use Country ETFs to invest in good value markets that we can believe in and derive comfort from the safety of the investments.