The old economics of depending on life long  jobs, pensions and Social Security are on the run.

The technology driven global economy, demographics and debt are making the past economic thinking and promises suspect.

Job opportunities change more rapidly in the new economy.  Corporate longevity is increasingly vulnerable.  We see many examples of this fact here at our North Carolina farm.

In one nearby town (Kannapolis) Cannon Mills was famous for its “Cannon Towels”.

Formed in 1887, the company believed in cradle to grave job opportunity.  By 1997, due to low cost labor competition overseas, the company was losing money.  Cannon’s largest product buyer, Wal-Mart, encouraged the company to move production overseas.  The company refused to abandon its employees, was undercut by overseas competitors and went bankrupt.

Thomasville Furniture Industries another North Carolina business that also started around the end of the 1800s also tried to remain Made in the USA in the 1990s.  The CEO said  “We really do not want to close plants…. We’ve got great plants, great people. You can’t get them back if you close them.”

The dot.com bubble collapse of 2000 forced the firm to announce widespread layoffs at plants across North Carolina and the West Jefferson plant (our shopping town), which had been producing dining room chairs since the 1930s, was closed.  Thomasville imports grew 15 times from 1996 to 2000.

The number of home furnishing manufacturing jobs lost in North Carolina that year alone was over  2,000.

Whether employers wanted to keep workers or not, economic forces were beyond their control.

In this new economy, employees feel that companies lay off employees with little regard for loyalty or length of service.  Few businesses offered full benefits.  Employees are not expected to last so training and positions are reduced.

The upcoming generation of millennials have already adapted.  They do not expect corporate care and (ages 15 to 30) who have a different set of expectations about their careers, including the need to “be their own brand”.  They plan to change jobs frequently.

Long term jobs are just not secure any more.

Taking government jobs for benefits isn’t the answer either.  Take Detroit as an example.  When the city went bankrupt, retired Detroit employees accepted pension reductions for the promise of reduced pension checks for the rest of their lives.

The promise is based on payments that equal more than $500 million a year — more than twice the city’s annual municipal income-tax receipts in recent years.  The pension fund would need to have consistent investment returns, averaging at least 6.75 percent a year for the next 10 years.  This is unlikely so the promise probably cannot be kept as planned.

Public pensions everywhere are at risk. Twenty countries of the OECD have promised their retirees a total $78 trillion.  Much of this promise is unfunded.  That is almost double the $44 trillion total national debt of those 20 countries. These pension obligations do not show up as obligations on government balance sheets.

Corporate pensions (even those guaranteed by the US Pension Benefit Guaranty System) are underfunded and feeling the pressure to chase yield  to pursue higher-risk investment strategies that could ultimately undermine their solvency. Low interest rates have also caused problems for pensions.

In 2003, the Government Accountability Office added PBGC to its “High Risk” list of agencies and it remains there to this day. The PBGC’s financial future is uncertain, due in part to a long-term decline in the number of traditional defined benefit plans.  The 2015 report shows a net accumulated financial deficit of $61.8 billion an increase of over $26 billion in the last year plus estimated exposure to future losses for underfunded plans of $184 billion.

Even if the PBGC could meet obligations, most pensioners lose under the guarantee.  The maximum PBGC benefit for retirees aged 65 is $55,840.92. The younger a person, the greater the loss.

Fortunately many of the same forces that create these problems also create opportunity.

Broadband and internet marketing technology allows small businesses to zero in on the like minded souls most likely to want your product, service or publication.

This shift makes small better in business.  Instead of watching our lifestyle step down, we can step up the size of our businesses and watch profits rise.

We can see small winning out every day.  Even the biggest business giants are thinking small.  Wal-Mart for example recently announced that it would sharply slow openings of its superstores in the USA.  Sales growth is expected to be lower due to sluggish store traffic and currency fluctuations.  The company said that it will cut its capital spending as $1.3 billion, and shift its focus toward e-commerce and smaller stores.

Trading down has always been a retirement-planning staple.  Now the concept is better than ever before. Instead of trading down into a diminished lifestyle expand the joys of life.  Use writing to reach small audiences.  Create a pinnacle career through writing that brings income longevity.

As Merri’s and my lives have adjusted to the changes, technology has brought to economic and social opportunities everywhere, we spotted a special shift that makes Smalltown USA a special good value.

This is why I have begin working with Independence Monthly.  You can see the September issue of IM here. 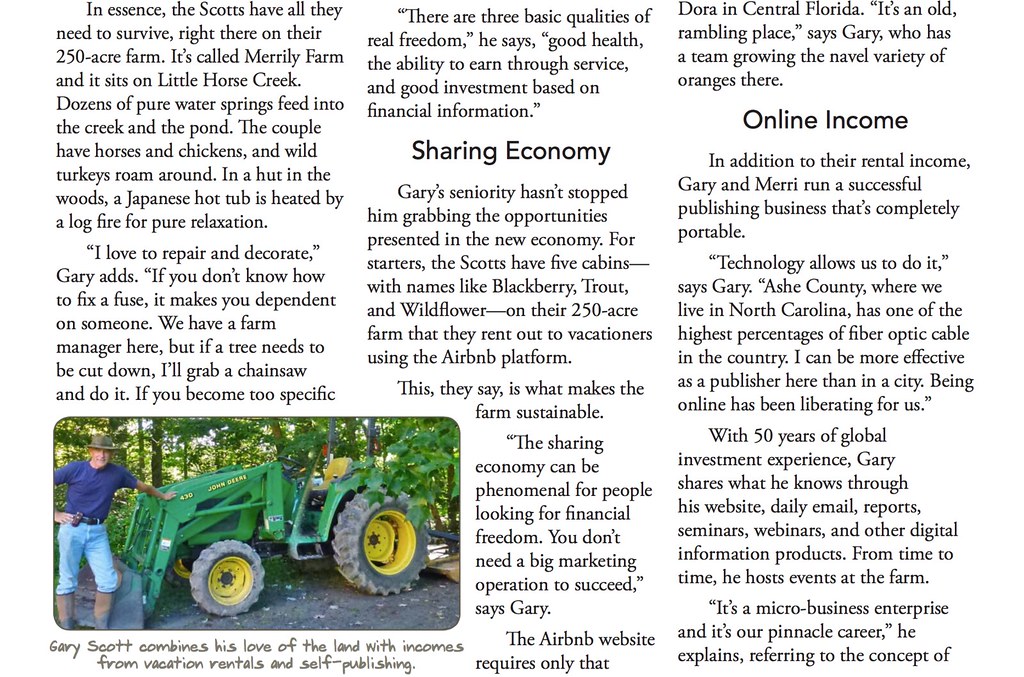