Here is confirmation of why we should invest in the ETF iShares MSCI United Kingdom ETF.   On June 22, 2016, a day from before the Brexit vote, I wrote: Invest in EWU.  (1) 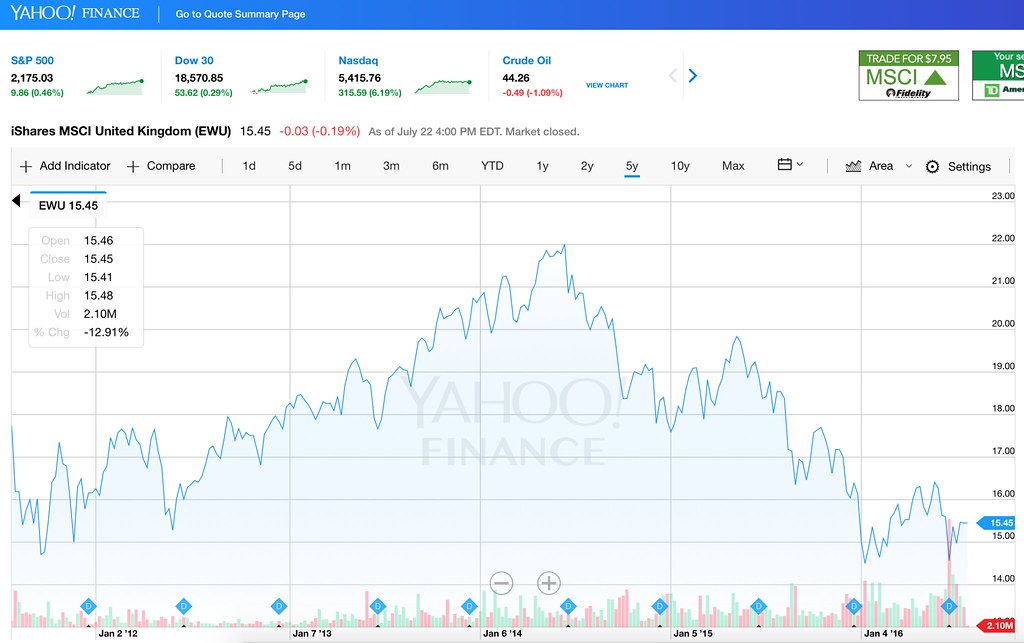 Eric Roseman, CEO of ENR Asset Management, one of the three asset information sources I follow, has confirmed the fundamentals behind this choice.  Eric sends an “Advisory Extra Report”, to his clients with the largest portfolios.

“Risk assets everywhere suffered big losses on June 24 and again on June 27 before stabilizing recently.  Although the U.K. will suffer economic consequences from leaving the world’s largest trading bloc, opportunities beckon for investors in British exporters.  Rarely have financial markets failed to correctly discount a seminal event.

“But this was the case late Thursday evening when the results of the British referendum stunned the financial markets and the ‘Leave’ camp won an historic vote to exit the European Union (EU) by a 52% to 48% margin. Markets had rallied sharply leading up to Friday morning, including big gains across Europe.  The markets were wrong.  The British pound crashed more than 7% on June 24 and another 5% on June 27 — its worst two-day rout on foreign exchange markets since the U.K. exited the European Exchange Rate Mechanism or ERM back in September 1992.  By late Monday, June 27, the pound hit a 31-year low.  A crashing currency is bad news for wage earners and consumers; but alternatively, it’s very good for companies that derive most of their revenues from abroad. It’s no surprise that many large-cap British blue-chip exporters actually logged gains in local currency terms on June 24 and 27.  We intend to ride this trend as it fully mushrooms into a bull market.

“From a valuations perspective, the FTSE-100 trades at 18 times trailing earnings.  That’s a bit on the high side based on historical averages.  But interest rates are also the lowest since the 1950s.  The price-to-book-value ratio is 1.7 times – not an expensive multiple.  Dividends, however, are attractive.  The British market ranks among one of the highest-yielding bourses at just over 4% in dividends compared to 2.3% for the MSCI World Index.

“British large-cap exporters will reap enormous earnings benefits from a much cheaper pound.  And the odds of the pound heading even lower is growing as the Bank of England mulls another round of QE or quantitative easing this summer to boost the U.K. economy.  A fresh round of monetary printing should help to support stock prices, too.

“One of the great lessons of currency crashes and devaluations is a simple rule worth heeding.  I learned this important rule from interviewing Jimmy Rogers in the early 1990s.  He always stressed that currency devaluations were a bad thing for domestic bond markets but great news for stocks, especially exporters. After the U.K.’s humiliating exit from the European Exchange Rate Mechanism in late 1992, the pound declined sharply.  But within days, the biggest British companies began rallying, resulting in big double-digit gains for investors 12 months later, even adjusted for the pounds’ decline.  A cheap currency can do wonders for exporters.

“The easiest and most cost-effective way to play the British stock market recovery is vis-à-vis the iShares MSCI United Kingdom ETF (NYSE-EWU).

“This low cost fund charges just 0.48% and yields 4.09% in dividends (latest 12-months). The Fund has been hammered, down more than 26% from its all-time high.  The biggest companies on the FTSE-100 are available in one index managed by Morgan Stanley Capital International.  These include HSBC, British American Tobacco, Royal Dutch Shell, BP PLC and GlaxoSmithKline among many others.”

The United Kingdom is also ranked as a Good Value (BUY) market by Keppler Asset Management, one of the other two asset information sources I use to find and track value investments.

We’ll look at how to cash in on the Brexit boost at our International Club Retreat August 12-13-14.  There is one space left, so don’t delay making this reservation.