Low interest rates are leading investors to take insane risks.   A  Wall Street Journal article “A Battle Brews Over Negative Rates on Mortgages” (1) tells that due to European interest rates  near or below zero there are proposed laws in Spain and Portugal that would cause lenders to owe money to borrowers.

If interest rates are below zero, banks would have to make mortgage payments to borrowers instead of vice versa.  The banks not surprisingly are fighting this.  Any fool who thinks about human nature for even a minute realizes that no economic system like this will work.  The Western world is build on a capitalistic system where capital creates income not expense. 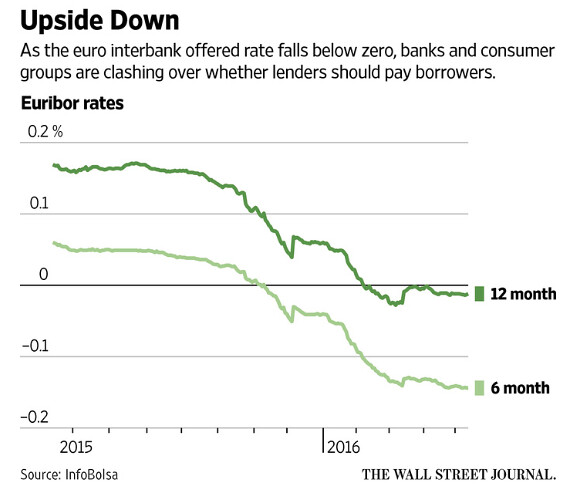 For example, the Swiss bank, Credit Suisse, launched an unusual new bond that would pay investors relatively high interest rates.  The catch is Credit Suisse could take the investor’s principal if rogue trading, information-technology breakdowns or even accounting errors by the bank lead to massive losses for the bank.

This is simply insane. In essence, investors are insuring the bank against its own mismanagement.

Credit Suisse is the same bank that has in recent years been caught up in a variety of scandals involving its role in helping wealthy U.S. and German customers evade taxes, its apparent violations of U.S. laws prohibiting dealings with countries such as Iran and Sudan, and its involvement in selling toxic subprime mortgage securities to investors. It pleaded guilty to a federal criminal charge related to the tax issue and was forced to pay a penalty of $2.6 billion.

In 2014 according to a BBC article, Credit Suisse admitted to misleading investors and violating securities law in the way they operated dark pools.  Credit Suisse paid $60m and another $24.3m relating to other violations.  The New York Attorney General and the SEC have both censured the banks.

Bloomberg News reports (4) that this year a Credit Suisse wealth manager and the bank face criminal accusations of fraud.

The article says: The timing is terrible for Switzerland’s No. 2 bank.  Its new CEO, Tidjane Thiam, is betting its future on managing money for the rich.  Wednesday, he announced plans for more cuts at its investment bank.  He also told Bloomberg Television he was blindsided by risky debt and illiquid positions taken at the trading unit that he expects to contribute to a loss for the bank in the first quarter.

The story tells about criminal complaints against Credit Suisse accusing the bank of money laundering and “churning” accounts to boost its revenue with unnecessary trades.

These are just a few of Credit Suisse’s recent misdeeds. There appear to be many more, but these alone make it seem irrational and irresponsible to accept this bank’s risk of mismanagement.

Yet low interest rates are getting investors to look at investments like this.

This would seem to not be our problem since Credit Suisse is only offering these investments to large qualified institutional investors.  Regretfully these investors include hedge funds, asset managers and firms that pool capital from pension funds.  Higher yields make pension managers look better, until something goes wrong, a likelihood that seems too possible to me.  This means your pension, or your bank or your insurance company many call bonds such as this your asset.

What is the reward for taking such risk?  The bonds are expected to pay a “mid-single digit” interest rate.  Take on Credit Suisse’s risk of mismangement for 5% or 6%?  That is really nuts. This is why we each need to keep as much control of our own investing as we can.   This is why we need a purpose for our our investments and always need to seek value.