Don’t be Diller About the Dollar in May

See below how to access my free one hour conference call tonight:  “How to diversify out of the US dollar with Small-town USA real estate.”

May is a special month for celebrating freedom in living, health and wealth.   Yesterday’s message looked at lessons I learned and adventures that were started 48 years ago when I arrived in Hong Kong, May 2, 1968.   Let’s jump ahead three years and three days.

The Yorkshire word diller refers to a boy who is dim-witted.  This rhyme is a moral lesson warning the importance of punctuality.   A valuable lesson I learned was to be punctual when diversifying out of the US dollar.

I learned this lesson on a trip to Singapore in May 1971, a date that began a new era for currencies.

I will never forget that May lesson because it was the day when the US dollar was unpegged from the Bretton Woods Agreement.   I recall it well.  I was in Singapore on May 5, 1971 with a seven day visa, to May 12, 1971.  You saw my first passport in yesterday’s message “Golden Freedom”.  I still have that passport though it expired long ago and on another page is a stamp for my entry into Singapore that day. 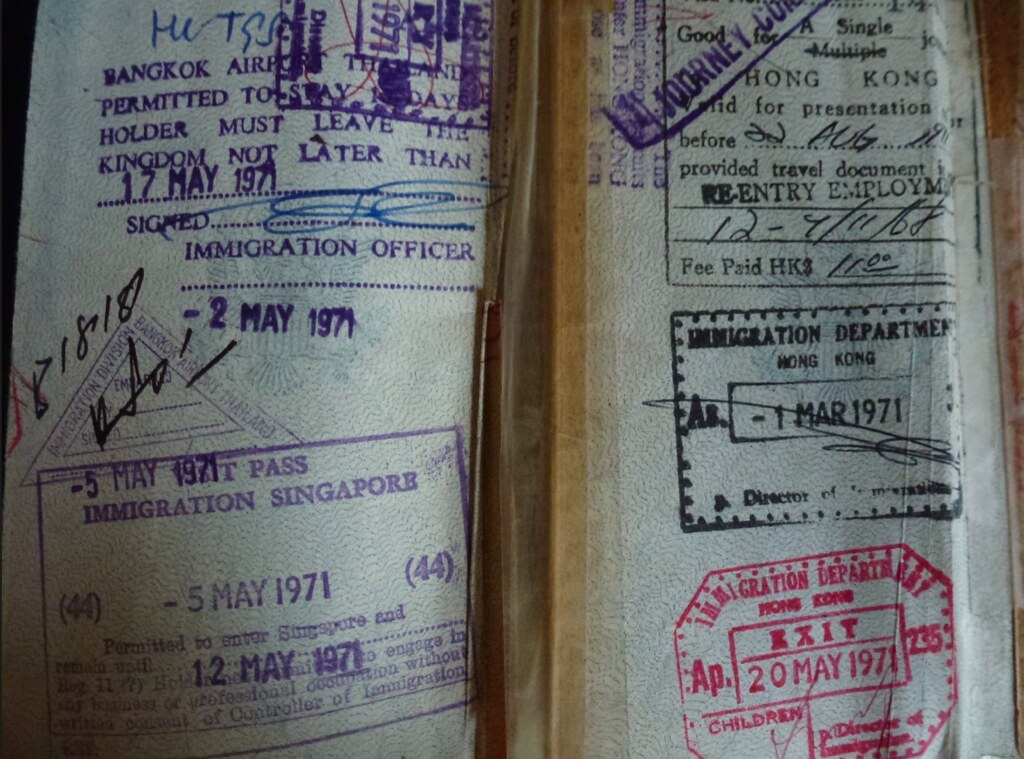 Little did I know that this was a week in May that would change the world.

I was staying at the Raffles Hotel.  This was a famous colonial institution, faded at the edges back then.  I loved the feeling of history and it offered a great outdoor restaurant just next to the Long Bar (home of the Singapore Sling).  There was something comfortable in the old fashioned pots of thick cut marmalade and slightly burnt toast that stood in racks of sterling silver.  This elegant setting and the quiet service was an easy, wonderful way to start the day.  I felt in place, relaxed and safe, part of an ancient tradition, the modern link in a rite that this hotel had offered for so many generations past.  I sat back feeling that all was well.  I felt in control and on top of that modern era.

That suddenly changed as I was about to learn a serious lesson about investing in currencies.

I opened the morning Straits Times and the headlines declared “U.S. Dollar Devalues”.

That comfortable era had just come to an end.  Currencies were in turmoil.

That day in May 1971, the US dollar devalued against the Singapore dollar.  This had been the era of the fixed US dollar before credit cards were in regular use.  We traveled with US dollars cash and American Express US  dollar traveller’s checks which were always as good or favored over local currencies.

Money changers would not take my greenbacks.  I had no Singapore dollars and couldn’t pay for my hotel.  I couldn’t even pay for breakfast and I was 12,000 miles from home. Was I ever scared!

By the end of the day, markets had settled and I could use my dollars again, but that short burst of fear taught me a lesson.

Since that day I have never trusted the US dollar or any other single currency.  This has reaped rich rewards.  Betting against the US dollar (as I have again and again over more than four decades) has been exactly the right thing to do.  As the charts below shows, the greenback has lost about 75% of its value against other major currencies.

The first thing that fear did was lead me to open a Swiss franc savings account.  The chart below shows what a wise move that was (in those days.) 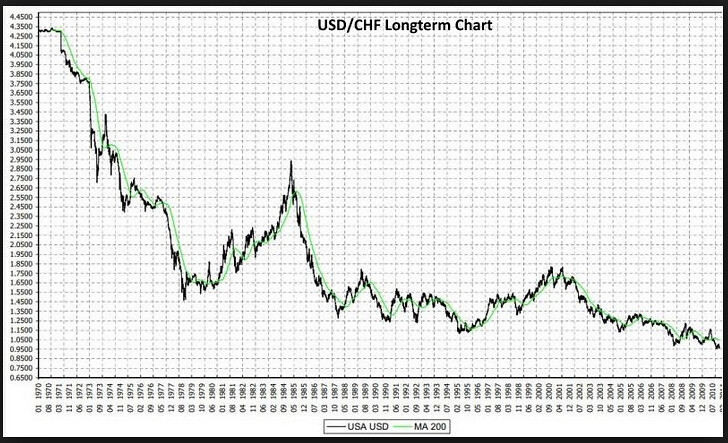 US dollar fell versus the Swiss franc from 1971.  Click on charts to enlarge.

The dollar didn’t just drop against the franc.   The dollar, Japanese yen chart below shows the same trend. 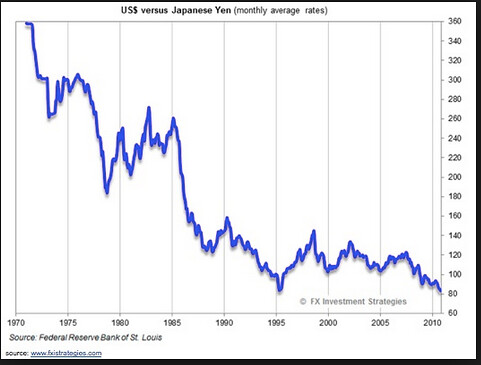 The dollar fell again all major currencies for ten years.  Then it skyrocketed back for five years and then crashed again.

This is the value of experience as this lesson led me to profits now.  I became very excited last year because I saw the greenback strengthen against all major currencies in almost exactly the same way as it had in 1985.

This trend is so strong it almost guarantees a forex profit.  I believe so much in this opportunity that I wrote a report last year, entitled “Three Currency Patterns For 50% Profits or More.”

This report shows why the dollar will fall strongly again and where to diversify out of the US dollar.

That trend is now really taking hold as the charts below show.

Since January, all the major currencies began appreciating against the greenback. Here is a chart that shows the Swiss francs rise. 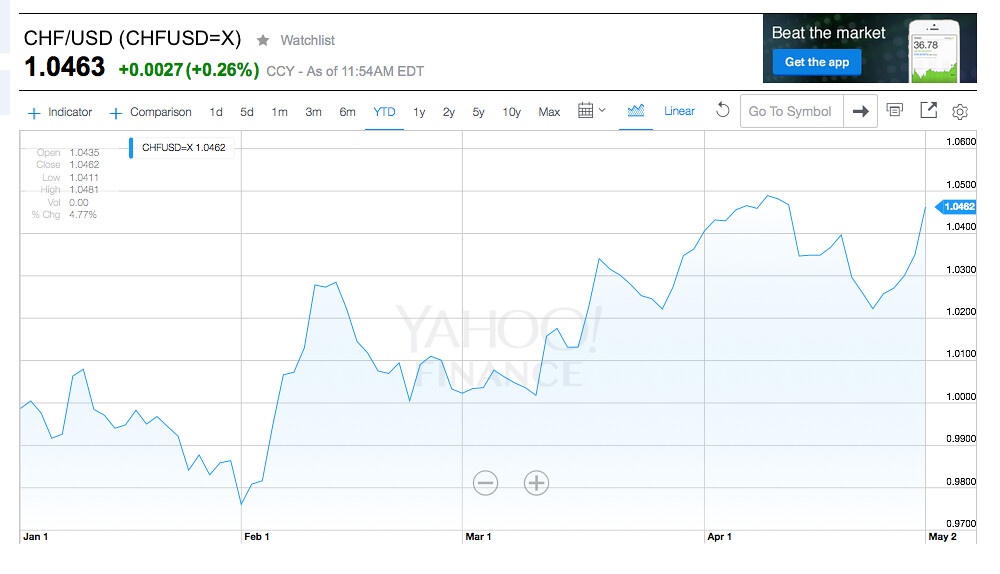 This second chart shows how the dollar has been falling against the Japanese yen since January. 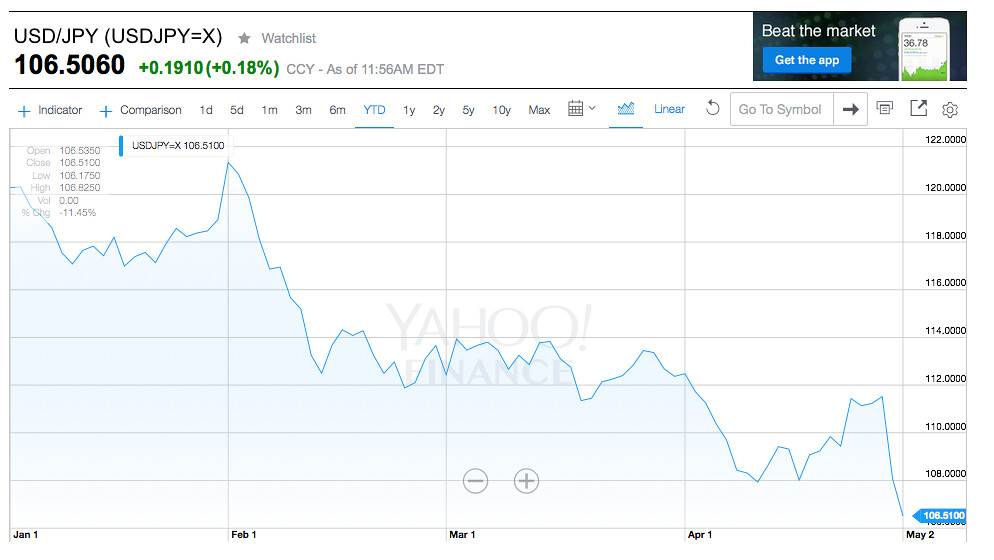 The euro has been rising versus the dollar since January as well. 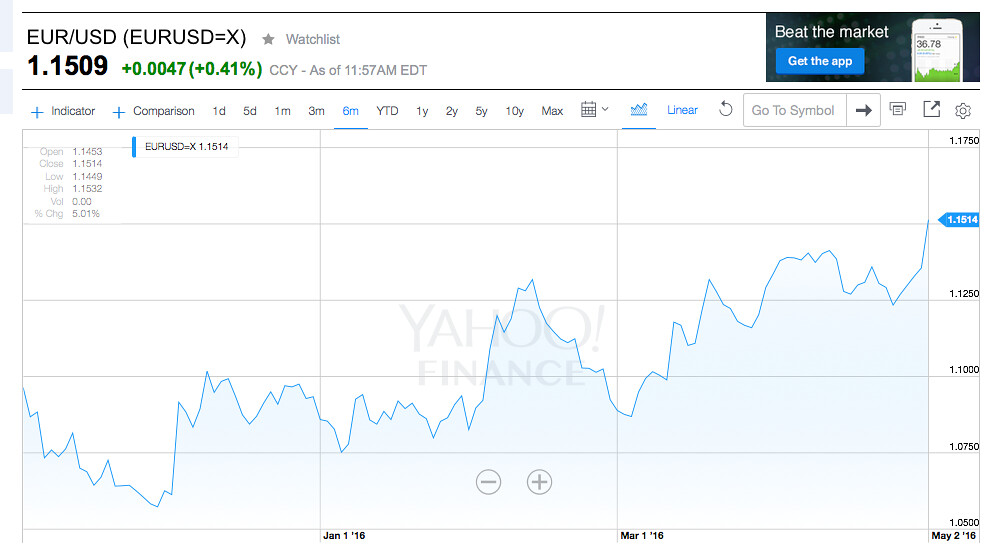 These trends start slowly and then usually accelerate so there is still time to diversify.  Don’t be a diller and be caught by a sudden dollar decline.  Learn from my experience in May 1971.  Diversify out of the US dollar… now.   Learn below one way to diversify into good value shares in seven major currencies now.

Today you can join in a one hour conference call with Jackie Lange’s Investment Group.  I’ll be speaking about an hour on “How to diversify out of the US dollar from Small-town USA”.