How to Survive Selective Inflation

The worst kinds of inflation are unreasonable rises in the costs of basics such as  food, shelter and medicine.   There are times when due to income, inequality or legal inefficiency, inflation becomes a form of extortion.  Take the case of shelter, various anti discrimination laws are used to stop landlords from abusing their power to provide  shelter (such as asking for sex to reduce or forego rent), but the practice is all too common.

We don’t have to look far to see legal extortion in medicine.  There has been an outrage about the rise in the price of a decades-old drug called Daraprim.   A new company, Turing Pharmaceuticals, bought the drug and promptly increased the price from $13.50 per tablet to $750 per tablet — a 5,000 percent jump!  However this new company is just following the example of Valeant Pharmaceutical which has a business model of buying existing drugs and raising prices aggressively, rather than trying to develop new drugs.  In essence these companies are extorting (currently in a legal way) unreasonable profits with the threat, “Pay up or die”. 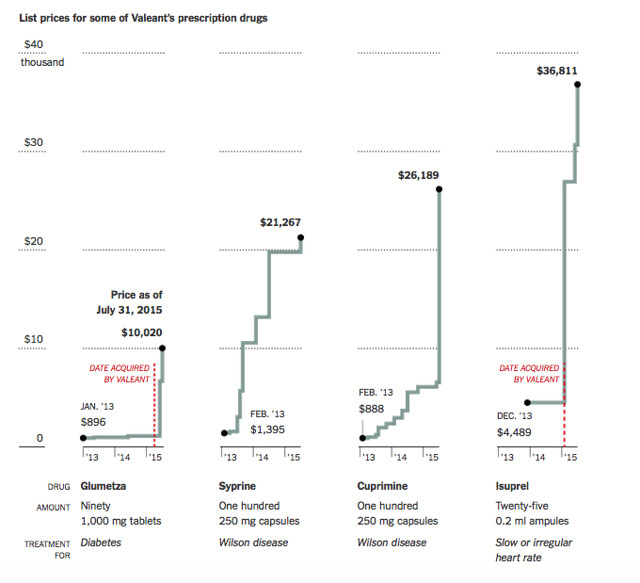 This image from the New York Times article on rising drug prices (1) shows how in 2015 alone, Valeant raised prices on its brand-name drugs an average of 66 percent.

This means that gold and silver were reasonable hedges against some forms of inflation.  Had you stored a pile of the precious metals away in 1942 to buy a car  or house today, you could do it.   This is true of going to a movie, up 33 times or renting an apartment.  Apartment rentals are up 34 times.

Ideally this means that food companies have been good about not gouging consumers.  Regretfully in the face of growing income inequity, failing corporate ethics and rising food prices we might be a bit cynical and not count on this.  The more likely fact is that food processors will see the lag as an excuse to let food prices catch up.

Last May the Labor Department indicated that Americans should be prepared for food prices to remain relatively high.

Meats have seen the steepest rise in price along with dairy products.

Rising food prices can continue to a be a source of stress worldwide as internationally traded food prices rose by a steep 4.0%. Corn and wheat, in particular, contributed to the rise.  The commodities each increased 12% and 18% worldwide this year through the middle of the year despite record grain harvests.

According to an article at cheatsheets.com (2) The World Bank says that already high food prices have become “the new normal,” and writes that, in less developed nations, families cope with rising prices by “pulling their children out of school and eating cheaper less nutritious food, which can have severe life-long effects… one-third of all child deaths globally are attributed to under-nutrition.”

There are numerous reasons for the increasing cost of food, climate change, drought, increased demand, rising labor costs and worker shortages all which create price pressure.

The best way to overcome selective inequality inflation such as rising food prices is to make sure your income and savings rise faster than prices.

The price comparisons in my research show that gold has outperformed nine of 14 inflation standards reviewed.  Silver outperformed 12 of the standards.  This suggests that gold and silver have done pretty well in maintaining value as real money.

However, this comparison also suggests that gold and silver are not necessarily badly undervalued either.  Beware of claims of $2,000 or $5,000 an ounce gold!  The price of gold and silver are likely to continue rising and falling along their medians.  If the conclusions of the inflation comparison are correct, any time silver drops much below $14, it is perhaps under valued. Gold below $1,150 is also likely a good deal.

This suggests that the price of silver and gold may not rise as fast as the price of medicine or food.  This is why I have written two reports, one on value investing in currency patterns,  “Three Currency Patterns For 50% Profits or More” and on how to use leverage with silver, “Silver Dip 2015“.

Integrating equity and currency value investing with leverage and precious metals can increase profits to help us stay abreast of selective inequality inflation.