How to Profit with Syrian Pounds

You can profit by using the Syrian pound as a lesson, but not as an investment. 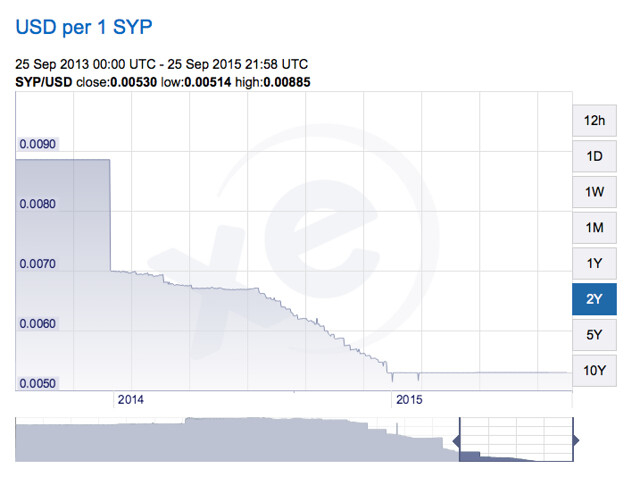 Chart of the Syria Pound’s collapse versus the US dollar from Xe.com (1).  Click on image to enlarge.

I do not think we’ll see any major currency collapse as the Syrian pound has.  In fact the world is so interconnected that no country can be allowed to fail as we are seeing in Syria. Disaster in even a small country like this can create huge concerns for everyone.

We can also see silver linings in every cloud.  One of Germany’s major problems has been a declining fertility rate and aging population.  A wave of immigrants, if assimilated correctly can revitalize the country and economy.  Yes, the change will alter German culture forever, but so too would a declining population.  The wave of Syrian immigrants will cause a lot of displacement short term but can bring good long term improvements.

A lesson from the Syrian problem was on my mind when I received this note from a reader:

Gary, you regularly mention that you do not expect a global economic or currency collapse any time soon, if at all in our lives.  Most of the other experts  (names deleted) that I follow all seem to think it is inevitable and their reasoning seems valid. Could you share your thoughts on why you think it won’t happen?    Thanks,

My reply:  I worked with the experts you named for many years in the 1970s and 1980s and have great respect from their opinions.

Back then, we all thought the currency collapse was coming.  One of my largest circulation courses was sold on the title “Are We 23 Months from Disaster” that predicted the downfall of the US dollar based on Harry Figgie’s best seller “Bankruptcy 1995” that predicted the bankruptcy of the US government in 1995.

The bankruptcy never came and by 2000 the US government was actually paying off debt.    In short we were all wrong for 30 years.  I acknowledged that fact and moved on.

When one looks at the debt accumulated, it does seem impossible that it can be paid off.  Inflation will reduce the reality of the debt, but I think we were wrong because we did not take into account the improvements humanity would make in productivity.

My revaluation of how currencies would unfold came from studying the two main factors in an economy;  supply and demand.  The reality is we have a growing global population who are becoming increasingly productive.  More supply and more demand, so there is more wealth.  There are plenty of distortions in resources, and distribution of this growing wealth, but there always has been and always will be unfairness and inequities between the rich and the poor.  In fact, some of the greatest future opportunities are in helping to solve these social injustices.

Money is simply a form of accounting to maintain discipline that gets most people to work and to receive.

My experience of tracking currencies now for 49 years leads me to believe that there are three likely scenarios:

#1: Most likely, soft landing currency scenario.  This most likely scenario is one of continued inflation and reduced value of purchasing power of all currencies.  Some currencies will fare worse than others, but economies are so interconnected now that no country can be allowed to totally disrupt (example Syria).    This is one reason moving from one country to another is not as good a way to protect wealth and lifestyle as it used to be.

Our Purposeful investing philosophy is based on this being the most likely scenario. This philosophy uses value investing with precious metals and leverage to overcome the losses of purchasing power.   Let’s face it, Warren Buffett and super value investors like him are not concerned that a loaf of bread costs a lot more today than it did 40 years ago.  At a personal level, inflation is not the problem.  Wealth not growing faster than inflation is the concern.

#2: Serious inflation where investments in hard assets (for example, gold & silver) may make a difference.   We have previously recommended keeping 5% to 10% of assets in precious metals as insurance.  This advice has resulted in really poor performance from the 1970s to now.   In other words holding metals as a hedge against currency destruction is an expense, not an investment.  Real estate rises in this scenario.  We saw the big property jump during the high 1970s inflation.  This is why we have put more of our portfolio in good value rental real estate. This is a good hedge for scenario #1 and scenario #2.

#3: Total social disintegration and global strife.  This is the least likely scenario.  The results of this scenario are so unpredictable that it cannot be planned for.  Fortunately the lifestyle Merri and I enjoy, living in agricultural areas surrounded by abundant wood, water, soil and land and where we could sustain ourselves in a total social economic breakdown seems to offer the most likely chance of comfort and survival.

I hasten to add that we live this way because we truly enjoy such a lifestyle.  We evolved into this lifestyle without any thought of scenario #3. If we loved theater, shopping, dining, galleries, coffee shops and cafes, etc. etc., we would not live where we do.  Peace, quiet, lots of green space, water and clean air are more important to us so our lifestyle is based on what we like, not as a protection for scenario #3.  Our extra weighting in real estate is also a labor of love. Driving around looking at houses for sale, is a hobby we enjoy.  Finding fixer uppers and fixing them is our joy.

Both of our homes, Central Florida (Mount Dora is the highest city in continental Florida) and northwest North Carolina are basically free of flooding, earthquakes, tornadoes and hurricanes.  Yet we did not choose them for their safety. We moved into these areas because we love them, the weather, the nature and access to our children and grandchildren.

Almost everyone would be poorer in scenario #3.  Gold, silver and other precious metals might not mean much for awhile.  Food, shelter and energy will be what counts.  Let’s all hope we don’t see this scenario unfold. The most important asset in this third scenario will be mastery of one’s health and ability to set and complete independent goals.

Learn how to master inflation.

To help you gain mastery over your investments and all your important goals in life, this week only Amazon.com has a countdown special on the Kindle edition of Bob Gandt and my new book MASTERY for only $2.99.   The print list price $13.99, the Kindle regular price $6.99.  Download it directly to your Kindle reader or onto your PC, Mac or tablet on an app from the Amazon page.

There is always some chicken little crying that the sky will fall.  I used to believe this, for decades and then realized, I was wrong.  Create your affairs so you have do well in scenario#1, but maintain flexibility.   The first golden rule of investing is “There is always something we don’t know” so don’t become too invested in any scenario.

Keep an open mind and always keep some powder dry.   The long term basics for growing wealth are good, so don’t let the short term distortions blind you.   Live the life you truly enjoy and attain mastery over that life.  This is the best posture for success and defense anyone can enjoy.