How to Avoid Swiss Francs During Inflation

Inflation is important.  Some parts of the cost of living have been rising much faster than statistics suggest.  Anyone who visits the grocery store quickly learns this fact.

The last time this economic phenomenon happened my investments earned extra profits so I have been preparing to react to this particular type of inflation. Intelligent investments can create extra earnings that will offset the costs.  My investment will not include many Swiss francs, if any at all. 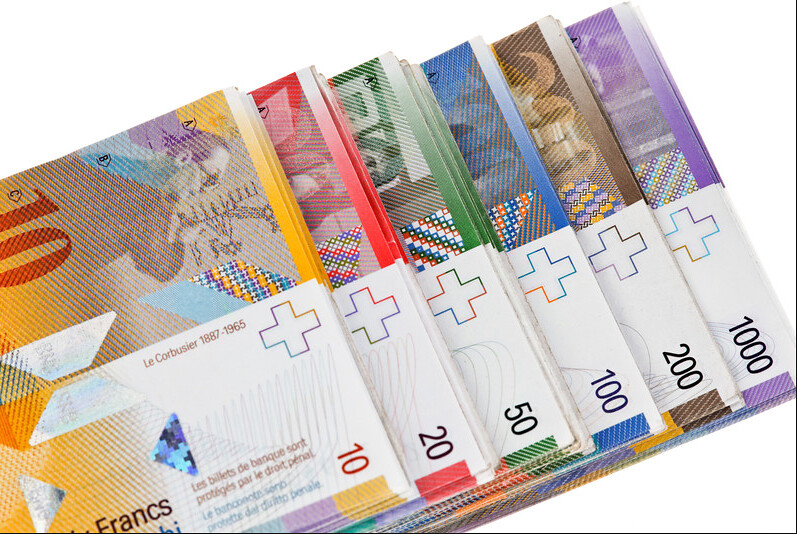 In the past, inflation protection was easier because other major governments were not involved in excessive government spending.  One could get out of the US dollar and invest in German marks, Japanese yen or Swiss francs and expect to make a profit.

This tactic no longer works.  The German mark is gone, so we have to invest in euro to get a German investment.  The euro has great potential versus the dollar but nothing like a German mark would have.

The Swiss franc, was a great currency for protection for many decades, but the fundamentals no longer are so strong.

First of all, Switzerland’s economy is simply too small for the franc to be a reserve currency.   In eras past, only a small portion of the world’s wealth (held by the richest) had access to Swiss francs.  In modern times, a huge population had access to investing in the franc.  Yet Switzerland’s population at 6 million people is the size of Philadelphia or Dallas, Houston or Washington, DC.

Switzerland needs to keep its currency pegged somewhere close to the euro as Germany is its largest export country.

There is good information about Switzerland’s exports at a MIT University site. (1)

This chart from the MIT site shows Switzerland’s main exports.

Some investors make the mistake of looking at the Swiss franc as it was decades ago. I have warned against this for many years.

Years ago in a different world, Switzerland was isolated and fiercely independent. Its mountainous terrain and well-organized citizen’s army gave strength to claim and enforce neutrality.

The small population (about 6 million) believed in personal and hence banking privacy. The people were incredibly conservative and highly efficient. They did not believe in government debt and demanded that their national bank keep a large amount of gold as a reserve for their currency.  This made Switzerland an ideal banking center in those days plus made Switzerland a refuge in times of turmoil. Swiss francs in a Swiss bank account were considered one of the ultimate forms of financial safety.

This all changed. The computer, new tactics in war and the global economic community turned everything upside down. The computer was like the Colt .45, a great equalizer, making bankers in England, Italy or Spain, etc. as efficient as the Swiss. New instruments of war, intercontinental and cruise missiles, nuclear weapons, etc. dramatically reduced Switzerland’s natural defences.

Most of all, the global economic community forced Swiss banks to deal in US dollars, British
pounds, Japanese yen and German marks. Swiss banks had to open centers abroad and hence became vulnerable to other country’s laws. They lost much of their independence!

Today Swiss banks are affected by what happens in the US and other countries.  More importantly, the Swiss franc can no longer be allowed to be the reserve currency of last resort. Switzerland is a poor country in terms of natural resources lacking oil, minerals and the ability to feed itself.

Switzerland is a trading nation and must have its currency at parity with other nations which allows them to export goods.  It must export to survive. A large segment of its exports go to Germany. When the Swiss franc becomes too strong, especially against the euro, the Swiss react quickly to force its parity down.

During the 1970s recession when investors began flocking to the franc, the Swiss National Bank imposed a 12% per quarter negative tax on Swiss franc accounts over 100,000 SFR held by overseas investors.

In the last five years, the Swiss franc appears to have really strengthened versus the Euro as this chart (2) from Xe.com shows. 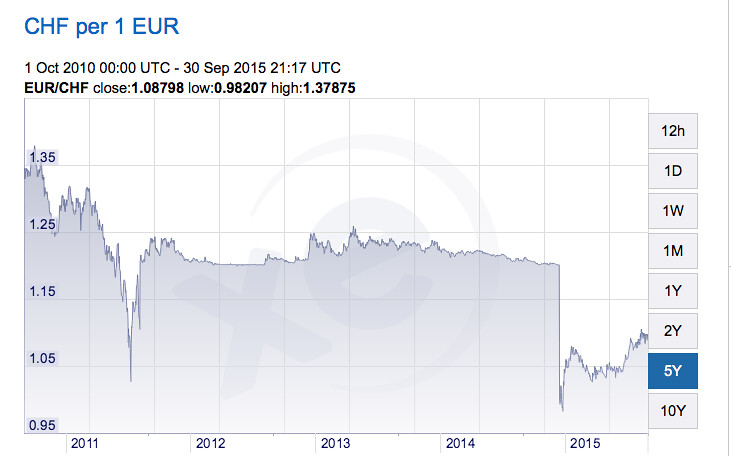 This chart shows a special risk in the Swiss franc. The Swiss National Bank protects the SFR and has a nasty habit (see 2011 and 2015) of manipulating the SFR exchange rate. The sharp drop of the franc earlier this year is like a spring ready to push the parity of the Swiss franc back down versus the euro.

This also gives a distorted view of the Swiss franc Euro relationship.  The Swiss franc has simply switched its parity with the US dollar and as the chart (3) shows.  The franc has maintained its value with the dollar now for five years.  I believe this is because someone at the Swiss National Bank is smart enoughj to know that the dollar is too strong and when it corrects, the francs parity will move back closer to the euro.

This was really bad for speculators who were long in Swiss francs, a brilliant move on the part of the Swiss National Bank.  Investors will think twice about jumping into the Swiss franc thinking they can make an automatic profit. 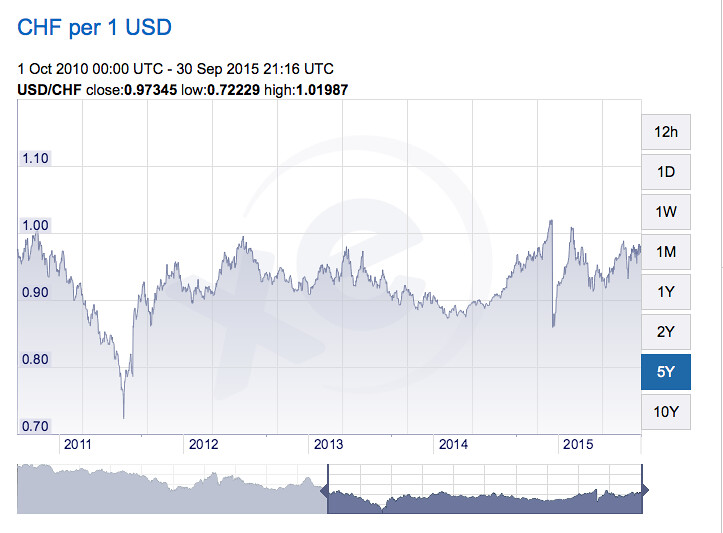 Since the US dollar is seriously overbought, the suggestion is that when the greenback corrects versus the euro, so too will the Swiss franc.

Switzerland is a good banking center, yes.  The Swiss franc may be a strong, stable currency, yes, but the Swiss cannot afford to let the franc rise too high and the profit potential on Swiss franc investments is extremely low.  The Swiss SNI Stock Market index has risen 33% in the last five years, compared to a rise of over 60% in the Dow Jones Index.  Since the currency parities have remained equal, investors in the SNI have earned half the profits as investors in the Dow.

Why choose a currency that is not likely to go anywhere when you are not getting paid a handsome income return?

I have shared this information for at least fifteen years warning not to invest too much in Swiss francs, especially when it is strong and overall this has been correct.  I have not changed my opinion on this.  If you find a good value investment denominated in Swiss francs, go for it, but overweighting a portfolio in this currency runs the risk of muddled returns at best.

Learn how to master inflation.

To help you gain mastery over your investments and all your important goals in life, this week only Amazon.com has a countdown special on the Kindle edition of Bob Gandt and my new book MASTERY for only $2.99.   The print list price $13.99, the Kindle regular price $6.99.  Download it directly to your Kindle reader or onto your PC, Mac or tablet on an app from the Amazon page. 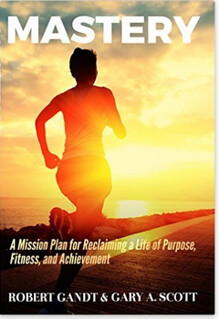 Order MASTERY (this week only) at Amazon.com for $2.99