Turmeric is a spice I try to eat each day.  Turmeric is inexpensive, easy to use, and enhances many delicious recipes, plus has profound health benefits. 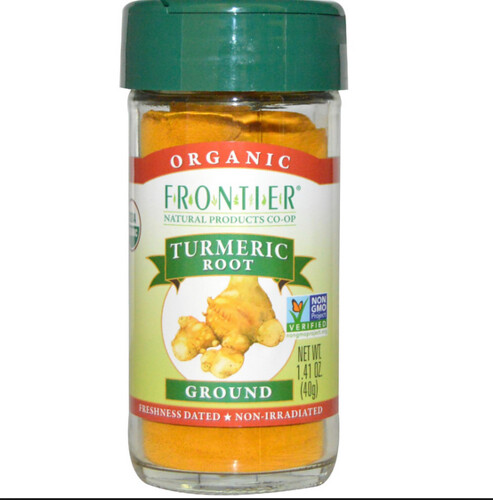 * Get a link to new health benefits in turmeric.

*  See why the co-op Frontier Turmeric is better.

* Enjoy a recipe that is quick, easy, weight reducing and healthy.

Turmeric is the friend of our livers and a healthy liver is vital to our overall good health!

The importance of our liver is described by Dr. Stephen T. Chang in his book “The Tao of Balanced Diet”. Chang wrote that we live in a toxic world with no hope of immediate change so we cannot avoid toxins all the time for as long as we live.  “We must thank God for giving us livers for our livers are toxin filters and detoxifiers, without which we cannot live.“

He goes so far as to suggest eating junk food once in awhile to temper the liver.  He wrote:  “Living strictly on pure foods in pure environments can weaken the liver’s ability to tolerate toxins, a single exposure can be fatal.”

The research was looking at natural compounds for cancer treatment and polyphenol, known as curcumin, has the ability to selectively target cancer stem cells, which are at the root of cancer’s growth.  The good news is that curcumin has little to no toxicity on normal stem cells.

This is really important because cancer stem cells resist chemo, radiation, and can even be stimulated to increase invasiveness through surgery.  These factors are believed to be at the root of tumor recurrence and the failure of conventional treatment.

There are simple ways to have good natural health in our increasingly complex world.  One simple yet effective way is by adding turmeric into our meals.

For those interested in healthier nutrition, here is a tip about turmeric sent to us by our friend, Blaine Watson.

A diet high in turmeric may help reduce weight gain by suppressing the growth of new fat tissue, according to a study conducted by researchers from Tufts University and published in the Journal of Nutrition.The study was funded by the U.S. Department of Agriculture and a grant from the Higher Education Commission of Pakistan.

“Weight gain is the result of the growth and expansion of fat tissue, which cannot happen unless new blood vessels form, a process known as angiogenesis,” senior author,  Mohsen Meydani said. “Based on our data, curcumin appears to suppress angiogenic activity in the fat tissue of mice fed high fat diets.

“Curcumin is an antioxidant chemical in the polyphenol family that naturally occurs in turmeric. In contrast to some phytochemicals, it is easily absorbed by the body.

“In general, angiogenesis and an accumulation of lipids in fat cells contribute to fat tissue growth,” Meydani said.The researcher also noted that “curcumin appeared to be responsible for total lower body fat in the group that received supplementation.

“In a similar study conducted on cells rather than animals, the researchers also found curcumin to suppress angiogenesis. The chemical also appeared to suppress the expression of two genes linked to angiogenesis in both the mouse and cell experiments.”

I wanted to remind everyone  that turmeric is to be used with some degree of awareness. We never eat it raw. It must be cooked in our food. Capsules are therefore not an option.  We use only organic turmeric. The regular turmeric you buy for example in an Indian store is heavily adulterated with chalk and talcum powder and food coloring.

We also use turmeric sparingly. It is highly, highly effective in purifying the liver. The North American/Western diet and lifestyle is highly toxic with many many sources of impurities which are metabolized and stored in the liver. When turmeric is introduced to the diet these toxins/impurities are squeezed from the liver (this would be a contributing factor to weight loss) and this is a good thing but not if it is overwhelming to the body. Detox crisis is a real possibility.

A gentle and universal curry for western palates would be something like:

Sign in with Blaine Watson for his immensely wise and interesting free ezine:  blainepw@gmail.com

Delicious food is one of the great spices of life.  One way to make food delicious and healthy is with the spice turmeric.

Another way to protect the liver is to avoid statins by creating good heart health in other ways. See why below.

← The Trick of Success is No Trick How to Live Untroubled... in a Troubled World →