“In the short run, the market is a voting machine, but in the long run it is a weighing machine.” Ben Graham

We do not have to be brilliant to preserve our wealth.  When it comes to investing, discipline can make you smarter than the smartest man in the world. 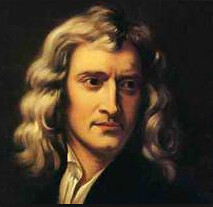 Sir Isaac Newton is widely regarded as one of the most influential scientists of all time.  His role was key in the scientific revolution.

His book “Mathematical Principles of Natural Philosophy” laid the foundations for mechanics.

He supplied a foundation to optics.

Newton formulated the laws of motion and gravitation and confirmed the heliocentric model of the cosmos.

His theories about color and cooling and the speed of sound were spring boards in physics.

In math, Newton contributed to the study of power series, the binomial theorem to non-integer exponents, and a method for approximating the roots of a function.

He is said to have been the greatest genius who ever lived!

But Sir Issac Newton also lost his shirt in the stock market.  His comment was “I can calculate the motions of the heavenly bodies but not the madness of the people.“

Sir Issac forgot the intelligence in seeking value. He ignored the fact that buying and selling discipline is more important than being smart.

Use math, not emotion to protect your wealth.

There are time tested mathematical systems that can help you know when to take profits that maximizes gains and minimizes loss.

These systems help you seek value but also create disciplined exit strategies because one of the toughest decisions most of us have is to know when to sell a rising or falling share.

Human nature makes it harder to let winners run, than to cut loses.

Let’s look at a real time example of how purposeful investing strategies can increase profit.  In this real example, in 2002 Merri and I invested in Jyske Bank shares.  We were visiting the bank with a group of readers.  We had been in Copenhagen for several days and took the group out to the bank’s headquarters in the small charming village of Silkeborg.  We visited the CEO (who has been a friend for many years) in his new modest offices, saw the bank’s new currency trading room and visited with the Jyske Invest Fund Managers.  What impressed us was the conservative and balanced thinking throughout the bank.  There were no staff limos or corporate jets.  The CEO’s office was small with walls of glass so staff could see him at work.  The bank worked for and talked about the long term view. 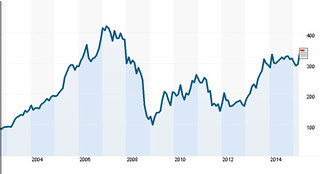 We invested in Jyske shares at DKK96.50 on 2nd September 2002. We sold half in April 2006 at DKK352.50.  The share price of the remaining shares we hold have never dropped below our purchase price.  Today the share price is over DKK300 again.

Could I have done better with a mathematical system?  I asked Dr. Richard Smith, CEO of Tradestops.com,  who has a PhD in mathematics and is one of the experts we use in our system, to see how his trailing stops strategy would have increased my profit.

It turns out I could have done better.  Much better.   Here is the chart of the trailing stops that his strategy would have given me had I been using it. 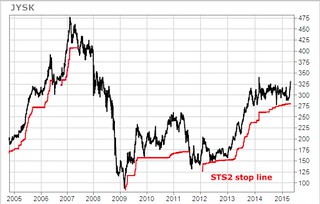 Let’s look at three scenarios to show the difference in profit between using simple buy and hold with no stops, my system of taking back the original investment and the Trailing Stops strategy.  For simplicity sake, I am not including dollar to Danish kroner fluctuations.  The forex fluctuations would make a difference if calculated in US dollars performance but we’ll analyze that element of the invest in another message.

Dr. Smith, backtracked to and see what the system would have done would with this share.

Richard sent the exact dates with buy and sell numbers:

Wow, what a difference if one followed and used the trailing stops.  The trailing stops and re buy signals increase the investment by 11 times versus 3.5 times in the other scenario.

The Jyske shares have a volatility quotient at this time of 15.5% so would create a sell signal at around DKK287 at this time.

These scenarios are based on approximations and do not include trading costs, management fees, etc. so the real money in the bank would not be exactly this amount.  For our analytical purposes this study suggests that trailing stops help us protect the successes we gain in spurts.

These scenarios are based on approximations and do not include trading costs, management fees, etc. so the real money in the bank would not be exactly this amount.  For our analytical purposes this study suggests that trailing stops help us protect the successes we gain in spurts.  To learn more, click on the link below.