The equity market shifts that value analysis have predicted may be starting to steamroll a bit.  This process will be helped by negative return European bonds.   Last week in the Wall Street Journal article, “European bond markets go down the rabbit hole” said:  Europe is no stranger to the avant-garde, the experimental and the absurd.  But until now, they have largely been the preserve of the arts. Now the financial world—and in particular the bond market—is increasingly challenging fundamental tenets of investing.  Take last week as an example. Switzerland became the first sovereign to issue a 10-year bond carrying a negative yield, raising 232.5 million Swiss francs ($237.2 million) with investors paying for the privilege of lending.  And German yields continued to grind deeper into negative territory: yields on eight-year bonds briefly dipped below zero, while the two-year yield stands at minus 0.277%.

There are some good points about European banking however, such as getting to visit great cities and great institutions like the Austrian cafes. 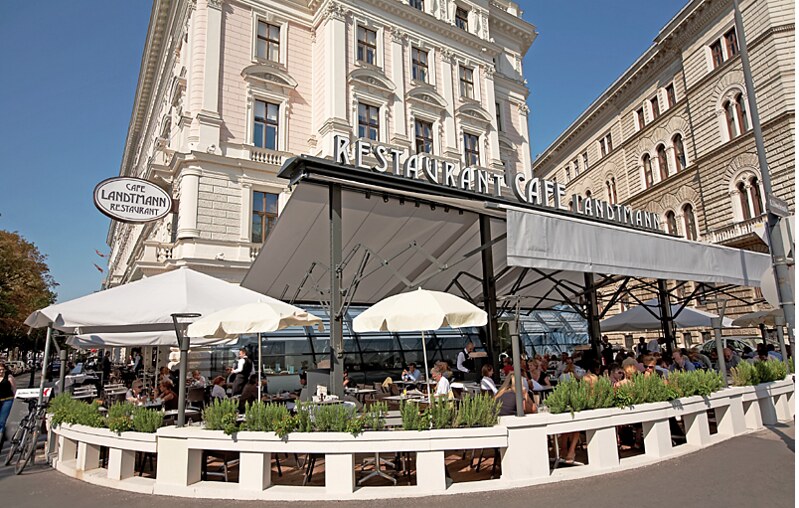 Cafe Lantmann Vienna, one of our favorite cafes.  More on this in a minute.

“The S&P 500 Index, red- hot over the past several years, has succumbed to more volatility and trails Europe, our prime regional recommendation heading into 2015, logged its strongest quarter in local currency terms since 2008; in dollar terms, European equities edged-out the S&P 500 Index, Over the past eighteen months, U.S. investor sentiment has remained overly exuberant, pointing to a major sell-off or an imminent correction.

“The worldwide sell-off in late March should come as no surprise. Investors should continue to purchase high quality dividend-paying global multi- nationals on any intermittent decline. The land-scape for earnings has shifted to Europe in 2015 largely because of a weak EURO and the European Central Bank’s (ECB) asset purchase program. Investors should focus on building new and existing positions in euro-zone large-caps and small-caps.

“Over the last few months we’ve made the case that European investors would gradually shift out of fixed-income securities and into stocks amid ultra-low interest rates. Europe has been the prime beneficiary of this asset allocation shift supported by an assertive ECB. Roughly 50% of the euro-zone bond market now yields a negative rate of interest on sovereign debt up to five years in some markets, including Germany.

“The U.S. Dollar Index hit a fresh 12-year high earlier in Month but has since started a modest correction. According to Wisdom Tree, European smaller companies sell at 16.8 times trailing earnings and filed about 3.5% in dividends. That’s better value than the S&P 600 Index, which has already recorded substantial profits since the financial crisis low six years ago and trades at lofty levels.

* Institutional investors have yet to pile into European small-caps

“We’re big fans of Wisdom Tree. The ETF (exchange- traded-fund) sponsor and manager is a value and income-based ETF specialist, focusing mainly on sectors of the global market that offer deep value, dividends or a combination of both.

The entire April 2015 ENR market Outlook is at enrassetmanagement.com

Our reports over the past year (and Merri’s and my personal investments) have focused on this European equity value.  For decades, I used three banks and brokers to execute long term value opportunities like this.  Jyske Bank (Copenhagen), Smith Williamson (London) and Valartis, (Vienna).

Regretfully last year, Smith Williamson stopped accepting US residents.  Now I regret that Jyske Bank has also announced that they will stop serving US customers this July.

I transferred my Smith and Williamson London account to a local (U.S) community bank that has the ability to buy and sell and hold overseas equities and bonds.  I have transferred my Jyske account holdings to Valartis Bank AG.

The roots of Valartis Bank AG (Austria) go back to 1890 when it opened for business in Vienna. The bank remained privately owned until 1966 when it was purchased by Nicholas Deak who changed the name to Bankhaus Deak. I began banking with Bankhaus Deak in the early 1980s and over the years watched several new owners change the name several times.  In 1988 Royal Trust Bank of Canada became the owner and the Bank became Royal Trust Bank Vienna.  The name changed again in 1995 when Anglo Irish Bank of Ireland purchased the bank.

London, Copenhagen and Vienna are three of Merri’s and my favorite European cities and we’ll deeply miss the banking connection and our banking friends in London and Copenhagen, but we are happy that Vienna is still offering to serve US clients.

The pleasures of Vienna go beyond banking.  Volartis Bank in Vienna bank is located just around the corner from Cafe Landtmann a Viennese institution since 1873. Merri and I always enjoy a sidewalk Grosser Brauner with Apple Strudel mit Schlag.  We are in good company there!  Landtmann has hosted regulars over the years such as: Peter Altenberg, Sigmund Freud, Gustav Mahler, Max Reinhardt, Marlene Dietrich, Romy Schneider, Burt Lancaster, Hans Moser, the Dutch Queen Juliane and Sir Paul McCartney.

For more information about how to use ENR Asset Management to bank with Valartis Bank in Vienna contact Thomas Fischer at Thomas@enrasset.com

There are always things we do not know, but one of the safest ways to gain profit and avoid loss is to follow value, which at this time is in European shares.