Super Spanish teacher, Rick Brown, is visiting his condo in Cuenca and reports on one good way to get to Ecuador and what it’s like arriving in Quito now.

First, because Ecuador Yatchaks do not use deodorants (they use Aqua Flora instead) this reader question may be of interest. 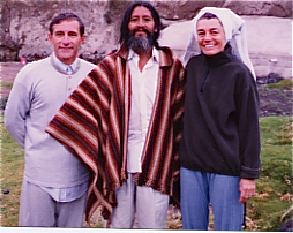 Merri and me with an Ecuador yatchak after a purifying ceremony.

The reader asked about essential oil anti perspirants:  Do they stain shirts since they’re derived as oils?  I’ll be interested in the response, since even with polo shirts, I like to wear a white t-shirt underneath.  I learned long ago that the mainline deodorants and anti perspirants  I used to wear definitely wreaked havoc with the cloth.

I asked Candace Newman who makes the Essential Oil deodorant and she replied:  Thank you for your question. We have not had any reports on oil stains … perhaps because there is actually no oil in the blends although they look and feel like oil.

1. The base is 100% organic golden jojoba. Jojoba is actually a liquid wax with a close molecular make-up to the sebum in our skin…thus absorbs quickly into the system.

2. The key is that less is often more.  After applying the deodorant it should be completely rubbed in.   If there is an “oily feeling” then rub further until it is all absorbed.  Good news is that it doesn’t take much.  John and I use one pump under each arm and rub in completely.  This is what we recommend… knowing that we are all a little different with our body chemistry.  Learn more about Essential oil deodorant here.

Here is Part One of Rick’s Cuenca review.

I arrived in the new Quito Airport in Tababela, Ecuador last evening about 5:30 PM.  I had an overall good flight on COPA Airlines.

I’ve taken to flying with COPA  (Panamanian Airlines) when possible.  In my experience, the staff are friendly and courteous, the food served is quite reasonable and tasty, the spirits are complimentary and cabin announcements are in both Spanish and English (although at times it can be difficult to pick out which is which). In my opinion they surpass American Airlines, United, and Air Canada handily. In terms of service, they are somewhat like a Spanish WestJet.

The airline seems to rely heavily on most routes on their new fleet of Boeing 737-800 aircraft. These are essentially all new aircraft within the last 4 years and are pretty much up to date with the latest of the latest equipment.

Despite the fact that I have fairly long legs, the seats in economy class are spacious enough that with the occasional stretch the initial leg of five or so hours was fairly comfortable. The cost for the flight on a return basis including Canadian taxes was $767.00 USD.

I departed Toronto where the temperature was -24 C and transited Panama City where the temperature was 90 Fahrenheit. It was something of an adjustment for the body. Then after some confusion due to an unannounced last minute change of gates at the Panama City International Airport I boarded a COPA 737 after a one and a half hour layover for the relatively short Panama to Quito leg of the trip.

The new Quito Airport is very spacious and well laid out. It was designed and constructed over the last three years by a Canadian firm and it appears that they have done a really nice job. The walk from the aircraft to immigration was reasonably short and I received very courteous treatment from the immigration staff and a hearty and heartfelt welcome to the country. Including a brief wait for an Officer’s attention, the entire immigration process took less than 5 minutes.

Unfortunately Tababela is quite a distance outside Quito and a Taxi ride to town is in the vicinity of $35.00. The ride, depending on traffic, is anywhere from one to two hours long though.

I’m staying at The Quito Airport Suites in Tababela which is less than ten minutes from the airport. I’ll be discussing the hotel a bit in my next installment.

Learn how to earn by self publishing in Ecuador.