Problems create opportunity and one big problem has become a robbery of our wealth in three ways.    Part of the guilt belongs to big government and part big business.  The problem is not the guilt, but the fact that the theft reduces the purchasing power of the dollar. 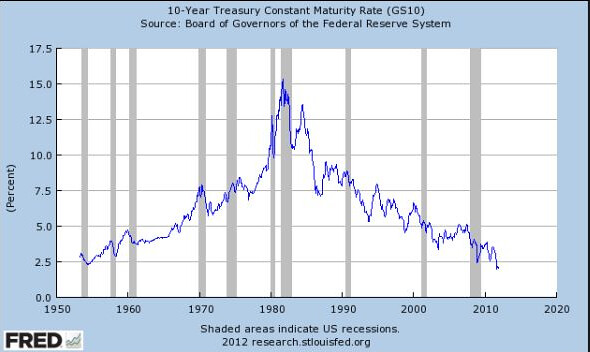 A form of theft.  Click on chart to enlarge.

The theft begins with low interest rates.  Lack of return on fixed investments forces security conscious investors out of cash and bonds into riskier equity investments.  This increased demand pushes equities so high they are a short term bad value. This creates a risk that billions in savings can be wiped out in a single correction.

These high share prices also increase tax revenues so the government can tout that the annual budget deficit is declining.  This is mathematical trickery created by high share price profits generated by low interest rates.

The second part of this scam is increased government spending financed by government debt.  That debt actually belongs to you and me as taxpayers.

The Cato Institute report entitled “D.C. Forgets about the Debt” by Michael D. Tanner (1): says that  US debt is expected to reach almost 18 trillion dollars this year.  This means that  every taxpayer owes $151,000 as his or her share of this debt.

The report says:  This year’s deficit is expected to be just $492 billion. Of course “just” is a relative term — a $492 billion deficit still means that we are borrowing 14 cents out of every dollar that we spend. Even so, this represents a marked improvement from the $1.4 trillion deficit that we ran as recently as 2009.  And, next year’s deficit is projected to be even lower, possibly as low as $469 billion.

Unfortunately, this respite is expected to be very short-lived. As soon as 2016, the deficit will begin growing again. By 2023, it is likely to once again top $1 trillion.  To this ocean of red ink, the CBO estimates that we will add an additional $9.4 trillion over the next ten years. And that’s the good news; after 2024, things really get bad.”

The third part of the theft is that government agencies are dragging big business into the scam.

An Economist article entitled “A Mammoth Guilt Trip” (2) tells how it has become harder for Corporate America to stay on the right side of the law.

The Economist explains the big legal settlements by large companies doing business in America.  Bank of America paying $17 billion, eclipsing a  settlement by Goldman Sachs $1.2 billion and Standard Chartered $300m in the same month.  In 2014 alone Morgan Stanley, Citigroup, Credit Suisse, Toyota, Marubeni, Barclays, Rabobank, General Electric and Bank of America (in another case) have made settlements.   There are reports of more such settlements with Walmart, Hospital Corporation of America and of course, General Motors.

Since the year 2000 there have been over 2,100 corporate convictions and guilty pleas. During this time, there has been a constant increase in both the number of Federal convictions and the size of the fines. These have grown impressively over the period.   In addition there are a very large number of  “deferred” and “non-prosecution” agreements plus individual state sanctions and those imposed by dozens of independent federal agencies such as the Environmental Protection Agency and the Fish and Wildlife Service.

This is not because businesses are less responsible than before, but due to changes they are thinking about liability.

The problem is not just treating companies as criminals.  It is that the crimes are often obscure, the punishments hidden and little justice is done nor is the public interest served.

The injustice is to the share holders of these firms.  Their profits and their equity pay these fines, not the pocket books of the company employees.  This process  is like a shake down of  equity investors by the Federal government.

That’s the three steps in the con.  Investors seeking safety of their purchasing power are forced by really low or non existent interest rates into risky shares.   This pushes equity prices beyond the share’s value. The investors risk loss due to a market correction back to true value.  Their wealth is further threatened by the risk that the companies invested in will have to pay fines (often huge ones) to avoid criminal prosecution.

These are the problems.

One is to intensify your search for value and return in equities.  See more on this here.

Another way to beat this theft is with a guilt free micro business that provides a valuable product or service and creates your own pinnacle career.

You gain fulfillment from doing something you believe is good.  This is a good alternative because where else can you place your hard earned savings and wealth?   Bank accounts pay almost zero.  Bonds pay little and are at great risk of rising interest rates.   Shares are over priced for the short term and are likely to correct.   Plus the businesses that these shares represent now face this growing form of  government extortion.

Small businesses are not such a profitable target.  Your own pinnacle career can enhance your lifestyle and provide income to protect again these harsh investing conditions and the loss of the dollar’s purchasing power.

(2) Economist article on guilt in business