Days of Wine, Roses are Better With Music

The power of music can enhance just about anything, including wine and roses. 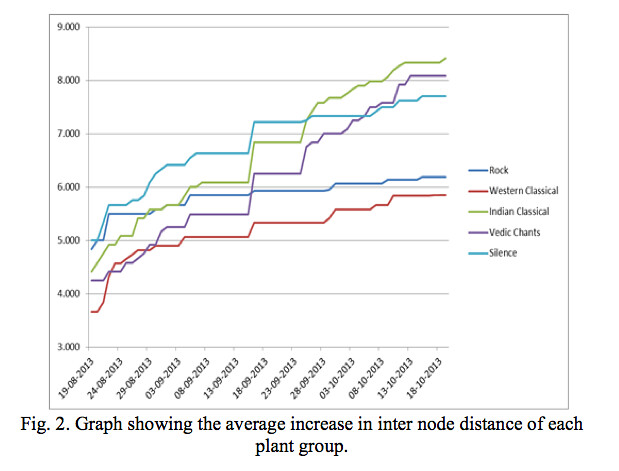 Chart in research paper “Effect of Different Types of Music on Rosa Chinensis”.  Click to enlarge.

Our friend Madeline Frank, PhD, is a world class concert violinist and teacher who uses music in the educational process.

She produces a monthly one-minute radio show that can be heard online. The October session is worth listening to because she has an interview about Giancarlo Cignozzi , a lawyer and musician, who in 1999 purchased a ruined crumbling farm estate with “vines in disrepair” south of Montalcino.

He decided to farm organically to “ensure the best, most natural conditions for making great wine and a part of that process was to play Mozart’s music to his Sangiovese vines.”

She features a recent article by Christopher Barnes entitled “Does Playing Classical Music to Vines Make for Better Wine?”

She says: In an article by Jeremy Pound, “15 Unusual Uses for Mozart”, from BBC Music Magazine Pound says, “Cignozzi pipes Mozart’s opera over 56 speakers in his vineyards – the grapes ripen in 14 days as opposed to the normal 20 which, we learn, in turn increases the wine’s alcoholic content.”

Professor Stefano Mancuso, a plant neurobiologist at the University of Florence says, “It is not that the grapes are capable of understanding the music and appreciating Mozart. But they are capable of appreciating the sound vibrations and the frequencies.” He says, “The vines are affected by low frequencies between 100 and 400 Hz. The results are somewhat impressive with regard to the quality of the grapes. The most fundamental result is that the number of pathogenic attacks from insects have declined in a significant way.”

Hylton Applebaum, co-owner at DeMorgenzon Winery in South Africa plays, 24 hours a day, Baroque music to his vines. Christopher Barnes says, “Appelbaum is an authority on classical music and has studied its positive effects on natural life forms, including babies in utero and the production of vegetables and cow’s milk.”

The abstract of a research report at the Journal of Environmental Science entitled “Effect of Different Types of Music on Rosa Chinensis” (2) says:  Music influences the growth of plants and can either promote or restrict the growth of plants (depending on
the type of music being played). The present experiment is aimed to study the effect of music on 30 Rose (Rosa chinensis)
plants taken in separate pots.

The research compared the growth of roses subject respectively to Vedic Chants, Vedic Classical Music, Western Classical Music, Rock music and silence.  The plants grown while subjected to the chants and classical music grew larger and had more flowers than those grown in silence.  Roses with rock music grew the smallest and had the fewest flowers.

Learn how to use chants and classical music to write and self publish better.

(2)  Effect of Different Types of Music on Rosa Chinensis