A disturbing trend in the water sector is accelerating worldwide.

I have been investing in water rights for years.

That’s why we selected out farm on Little Horse Creek.  Sometimes our returns have been a little more than we thought. Like when we were building  the covered bridge at the entrance. 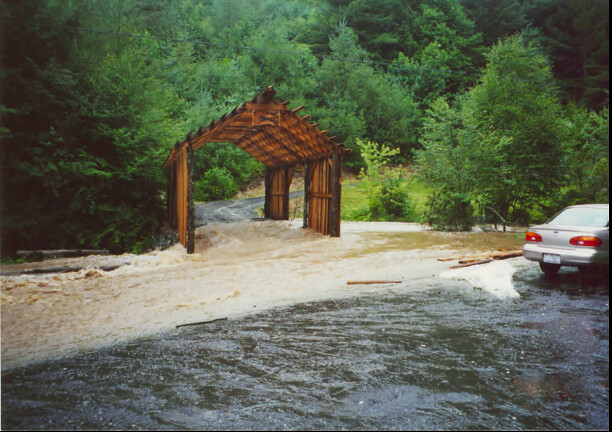 Oops!  Medicine is dose.  This is why balance is so important in maintaining health and wealth.  Too little water?  You die of dehydration.  Too much water? You drown.  Drought and flood are to be avoided which is why investing via indexing helps maintain balance.

An article at the Canadian Global Research website (1) entitled “The new water barons”  tells how the Wall Street banks and elitist multibillionaires — are buying up water all over the world at unprecedented pace.

Philippines’ Manuel V. Pangilinan and other Filipino billionaires, and others are also buying thousands of acres of land with aquifers, lakes, water rights, water utilities, and shares in water engineering and technology companies all over the world.

The second disturbing trend is that while the new water barons are buying up water all over the world, governments are moving fast to limit citizens’ ability to become water self-sufficient (as evidenced by the well-publicized Gary Harrington’s case in Oregon, in which the state criminalized the collection of rainwater in three ponds located on his private land, by convicting him on nine counts and sentencing him for 30 days in jail).

Let’s put this criminalization in perspective:
Billionaire T. Boone Pickens owned more water rights than any other individual in America, with rights over enough of the Ogallala Aquifer to drain approximately 200,000 acre-feet (or 65 billion gallons of water) a year. But ordinary citizen Gary Harrington cannot collect rainwater runoff on 170 acres of his private land.

We will look at how to invest in water with indexing ETFs at this weekend’s seminar in Montreal.

This is the last day to enroll in the Montreal seminar.

← How to Gain With Dollar Cycles Days of Wine, Roses are Better With Music →