The Wall Street Journal article “A Strengthening British Pound” (1) shows how there are three  ways to gain from multi currency investments with diversification, speculation and or a hedge. 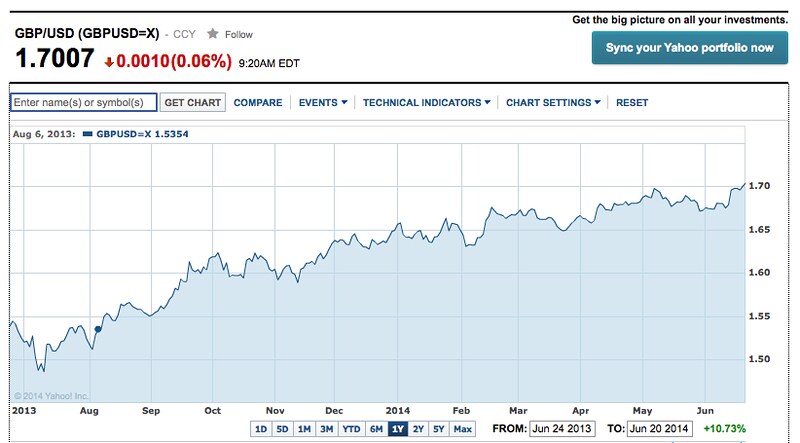 British pound versus dollar chart at www.finance.yahoo.com (2) shows the pound up over 10% in the last year. (click on image to enlarge).

The article says: A growing conviction among investors that the Bank of England will be the first major central bank to raise interest rates continued to drive the pound higher, propelling it above $1.70 for the first time in almost five years.

The surprising strength of the U.K.’s economic recovery has been a boon for sterling over the past year and has prompted a response from the central bank chief. The currency dipped below $1.50 last July, its lowest level in the past 12 months.

Against the euro, sterling’s rise in recent days has been even sharper. The currency touched a fresh 19-month low of 0.7961 to the pound during London trading on Monday.

This strength shows three ways we can use multi-currency investment strategies.

First, we can diversify.  This is the strategy I use.  My portfolio contains euro, British pounds, Polish zloty, Danish kroner, Mexican peso, Brazilian real and US, Singapore, Australian, Canadian and New Zealand dollars.  This evens out the currency strength of my portfolio.  From time to time I try to increase the weighting of currencies I believe will rise.  Fortunately last year I invested in some pound fixed income income investments paying 4% in pounds.  This means the yield I receive when converted into US dollars has increased to 4.53%. Plus if I redeemed this investment now, My $100,000 invested would be worth $110,000.

One of many simple ways to diversify currencies is with the ENR Global Currency Sandwich offered by ENR Asset Managers in Montreal.

ENR says: Investment Objective: To provide a fundamentally strong and diversified portfolio of foreign currencies to hedge against the long-term decline of the U.S. dollar. Our investment criteria for selecting currencies include those units harboring a combination of the following: trade surpluses, budget surpluses, low net relative debt compared to other regional partners, a high savings rate and in some circumstances, tax reform, which is bullish for FDIs or foreign direct investment. Some currencies, however, might not nurture all of the above characteristics but should at least maintain several to qualify in our currency basket. Investors can choose whether to include or exclude gold bullion as part of the basket.

or from Thomas Fischer at Thomas@enrasset.com

(2) Pound versus US$ chart www.finance.yahoo.com