Bitcoin has arrived in Ecuador in more than one way and has implications for the world.   We live in a digital work that makes many tasks easier and faster.   This extra speed is good sometimes but not in the creation of currency without value backing.

To save the nation’s economy, finally the sucre was abandoned and the US dollar became Ecuador’s currency.  This stopped Ecuador’s political system from continually creating more currency that fueled the sucre’s destruction.

Digital currencies have arrived in Ecuador.  This idea may reignite inflation in Ecuador.

Even worse the digital sucre may signal a global trend of faster expanding money supplies.

The concepts of non Bitcoin digital currencies began in Ecuador in 2o10 when Ecuador began using the digital sucre.

Bitcoin arrived more recently in Ecuador.  An article in Bitcoin magazine details how there were 30 delegates at the first Bitcoin meetup in Quito last February. (1)

There are two serious concerns about digital currencies such as Bitcoin and the digital sucre in Ecuador.

To explain the concern, let’s delve more deeply into the definition of money.  Let’s look at how currencies are created, how inflation occurs, and how the value of money is determined.

Money makes it possible for us to buy and sell without bartering. Money gives us a “medium of exchange,” which allows our complex global, economic system to function.

Money acts as a way to put tangible, universal value on commodities and services.  It helps us compare the value of one thing with another.  Money gives us a “unit of value,” which allows us to make decisions about purchases and investments.

Money should also provide  a way to store wealth — to preserve current purchasing power for spending at a later date.

Money must be “real and rare” to carry out these functions.   Only money created by real production can be real money that survives inflation.  Money must have seven specific qualities if it is to work properly.

* Specific Money Quality #2: Money must be portable. One must be able to take money where it is needed. This is what has made paper and plastic money so much more popular than gold.  Paper currencies, checkbooks and credit cards are so much easier to carry than lumps of gold and silver.

* Specific Money Quality #3: Money must be rare and require effort (real production or work) to attain.  If you look at all of the qualities of money, you can easily see why gold makes such good money.  This precious metal has all of the qualities required of money.  Yet if you compare gravel to gold, you will see that gravel also has most of these qualities, except rarity.  Gravel is as common as dirt and if gravel were used as money instead of gold, the temptation to just pick it up on the road, rather than work for it, would be too great.  Money must offer an incentive to work and apply discipline.  Rarity creates this incentive.

Reducing this quality of rarity creates inflation.  When a government reduces the rarity of its money, the action destroys the money’s value.

* Specific Money Quality #4: Money must be divisible and uniform in quality. In other words, people must be able to know that each unit of the money is real, not forged or altered.

* Specific Money Quality #6: Money must be naturally durable. There have been many times when goods or commodities such as chocolate, coffee, cigarettes or silk stockings, etc. have been used as money. The conditions were such that the commodity was so desirable and so rare that these two qualities were enough to make them a form of money.  Yet they failed to last as money because they are too fragile and once consumed cannot be used as money again. Real money must be naturally durable and able to be used again and again.

Metals such as bronze, gold and silver fit many of these categories.

Yet these metals are weak when it comes to the portability issue.  Gold and silver are bulky and heavy.

Plus there is the security issue. If everyone knows that everyone has a lump of gold sitting around the house… the temptation to rob grows.  Money must be easy to secure from local thieves and also from governments or others (counterfeiters) who will steal a currency’s rarity.

Bitcoin security is one of my major concerns. The Mt. Gox exchange had the largest trading volume, but had serious security breaches.  There are security risks of individual exchanges and security risks of storing bitcoin as well.

The Sucre beyond Bitcoin

A Wall Street Journal article  “Who Needs Bitcoin? Venezuela Has Its Sucre” by Mercedes Alvaro and Jeffrey T. Lewis tells how Ecuador and Venezuela began using virtual currency in 2010.

The Sucre is a virtual currency designed to replace the US dollar in trade between Ecuador, Cuba, Bolivia and Nicaragua.

The article says:  The sucre is a trading currency. Importers and exporters make and receive their payments in their local currencies.  Until now, almost all the trading using the sucre has been between Venezuela and Ecuador.

Ecuadorean companies exported $737 million worth of goods to Venezuela using the sucre system in the first nine months of 2013, an 80% increase from the same period in 2012, according to Ecuador’s Central Bank.

That growth has drawn attention from the country’s regulators, which are cracking down as fraud involving the virtual currency rises.

The heightened scrutiny of the sucre comes as law-enforcement officials and policy makers around the world are paying more attention to the risks posed by proliferation of virtual currencies. China, for example, recently moved to restrict its banks from using bitcoin amid concerns about money laundering. European regulators have warned of the risks of using bitcoin.

For companies in Ecuador, the sucre’s appeal is its implicit payment guarantee. A combination of falling oil revenue and currency controls have resulted in a dollar shortage in Venezuela that has left many importers of basic goods hamstrung. Ecuador exports to Venezuela everything from carts to tuna to diapers.

This digital sucre system creates several concerns.  One concern is of expanded inflation.  The transaction above has created money that may not exist.   Venezuela may not have the money to pay for the imports from Ecuador.  That sucre transaction may create funds without productivity and without any real backing.  This imports inflation from Venezuela to Ecuador.

The second concern is security.  There have been numerous claims of fraud in the sucre system.  Ghost companies have been created between Ecuadorean and Venezuelan firms, sending invoices with inflated prices for goods.

One Ecuador business exported calcium carbonate at a price of $1,000 a kilogram, when the actual cost of the shipment was 17 cents a kilogram.  Another fraud raised the price of handicraft equipment from $1,200 to  $250,000.

Finally, there is the concerns of money laundering.  The WSJ articles explain that Ecuadorean prosecutors have filed money-laundering charges against 19 people, nine of whom have been arrested while the others are still on the run from authorities. “It’s a very big operation, and we’re working in coordination with the prosecutors’ office in Venezuela,” said Galo Chiriboga, Ecuador’s top prosecutor. “We’ve detected criminal organizations that operated in Ecuador, sending money not just to Venezuela but also to other countries.

The global concern is that if these digital currencies work for the government that the idea will grow.  Digital currency will become the next generation fiat currency. This will make it easier for governments to devalue currency and harder for us as individuals to understand which national currencies are rational and balanced and which are not.

Be careful with Bitcoin.  The verdicts on its success and security are still out. 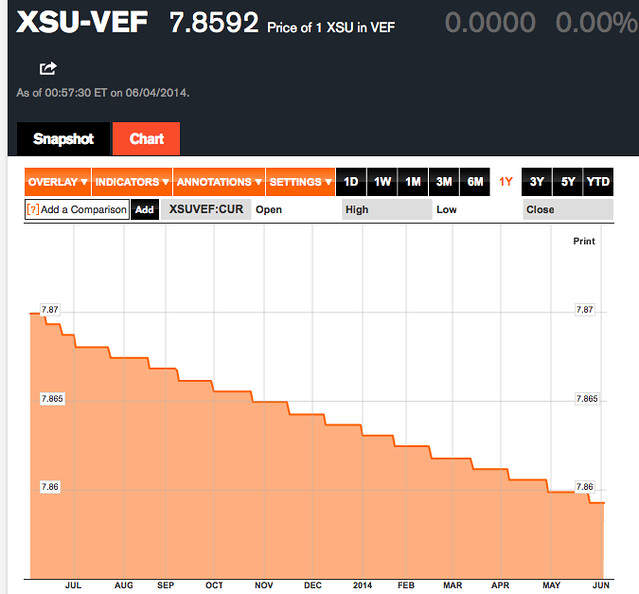 Digital sucre chart at Bloomberg  (Click on image to enlarge)

Watch the digital sucre (currency  symbol XSU) as well.   As the Bloomberg chart above shows, the digital sucre is already being regularly and slowly being devalued from the already ridiculously weak Venezuelan Bolivar.

The speed of this digital currency growth can be a warning of inflation in Ecuador and of more currency devaluations elsewhere ahead.

One way to protect again a currency’s devaluation is with multi currency investing.

(2) Who Needs Bitcoin? Venezuela Has Its ‘Sucre