A Drop in the Emerging Market Bucket


The May 19, 2014 emerging market value update  looked at  how emerging markets offered better than normal value at this time.  Investors have responded to this value.

The charts below show that each of these ETFs have risen in the 4% range in the two weeks since that update. 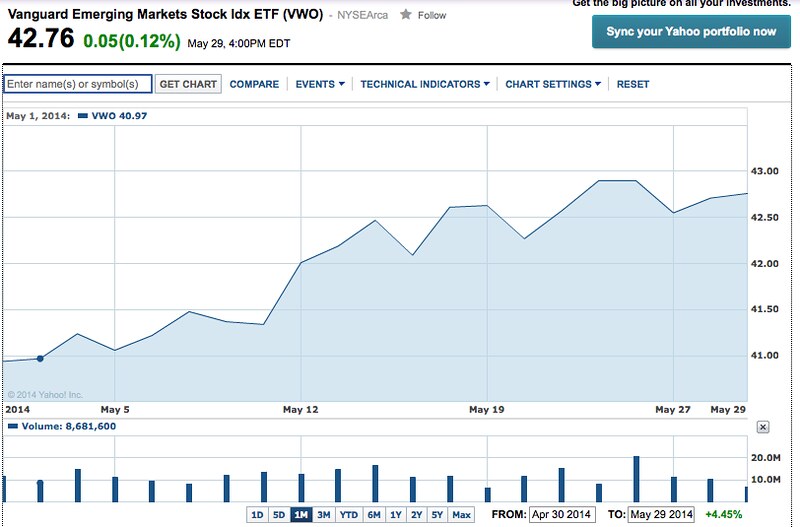 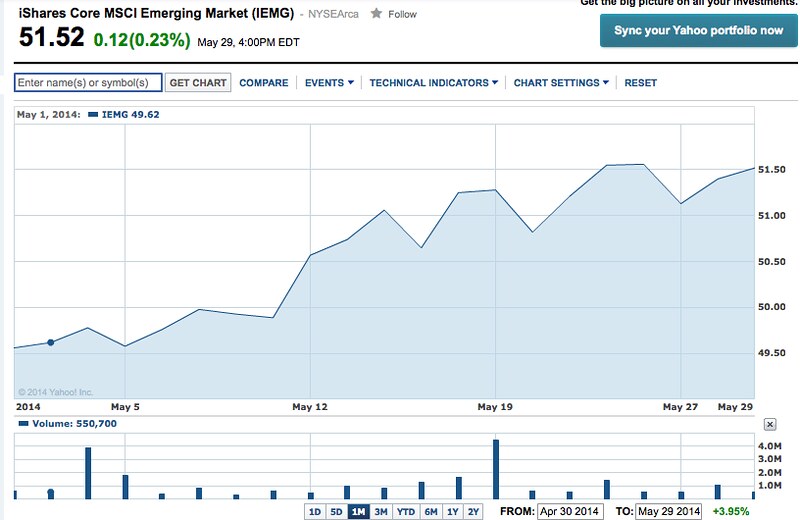 This is an indication that the value in emerging markets is and has been NOW.  Such values do not last long when the thundering herd tramples in.

This week’s Wall Street Journal article “Investors are settling in for another ride in emerging markets” confirms this fact.

Here is an excerpt:  Uneven stock indexes and low bond yields in the U.S., Europe and Japan are pushing waves of investor cash into markets from Brazil to South Africa that suffered big losses as recently as this past winter. Government-bond yields in the U.S. and Germany hit 2014 lows on Wednesday in response to the latest signs of soft Western growth.

In Thailand, one of the best-performing markets in Asia this year, a military coup last week barely rattled investors, who have largely stayed put.

The speed with which investors appear to have forgotten losses of up to 30% in some markets has been startling. Money is flowing back into emerging markets at the fastest pace in more than a year.

ENR’s May Global Analysis agrees and says: Emerging markets are historically cheap but Russia should be avoided and China over-weighted.  Asian currencies should also be largely avoided, except Singapore.

The CNCB article “5 Ways to Target Emerging Markets Using ETFs” features the two ETFs mentioned above  VWO and IEMG and is worth a read.

Short term trends created by good value are excellent entry points for long term investments.  This is where I start my long term trend searches.

However to get ahead of the herd, I look for more, some narrow niche that may have extreme value but be a little ignored.  I have always liked emerging markets and have been writing about investing, living and doing business in them for over 40 years.  Yet if all these billions are pouring in the change to accumulate bargains will fall.

Since I also like investing in water, how about investing in water in emerging countries?  Barron’s article “Water, Water, Not Everywhere”  by Abby Joseph Cohen asks the question and says:  Will inadequate water limit growth in emerging countries? The world’s freshwater resources are unevenly distributed around the planet.  Over 60% of the Earth’s accessible freshwater supply is found in just 10 countries, including Brazil (13% of global resources), Russia (10%), Canada (7%) and the United States (7%).  This imbalance is even more extreme at the per-capita level.  For example, China has roughly the same amount of water as the United States, but it also has four times the U.S. population.

I am updating our 2012 Investing in Water Report and will add a special dimension on water companies that help emerging countries.  I will let you know when it is ready.  In the meantime, you can read the previous report FREE.

A focus on water is one reason I also like the shares of Sandalwood Plantation TFS Corp.

In 2014 Mount Romance, a wholly-owned subsidiary of TFS Corporation, was awarded the Western Australia Water Corporation’s Champion Award for its ongoing water saving measures. Since Mount Romance began its activities in 2010, the company has reduced its scheme water use by more than 80%, saving a massive 28-million litres of drinking water.  These savings have been thanks to a water recycling program that which uses bacteria to purify the water so that it is safe to reuse in the production process. 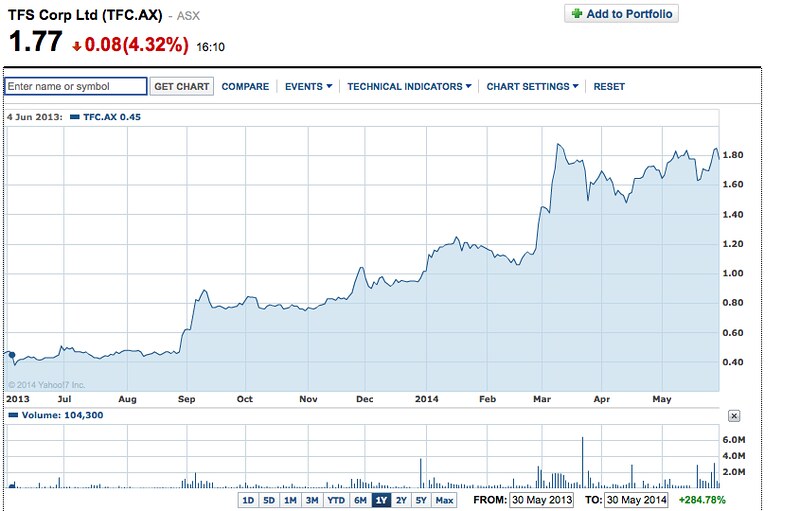 TFS Corp shares have risen 284% from June 2013 to June 2014.   For readers who ordered the “Sandalwood Investing Report” at Amazon.com, I have posted a new update that reveals big news about TFS Corp’s sandalwood oil  being used to treat a highly contagious pox virus skin infection for which there are currently no approved prescription treatments.  Use the link in the “Sandalwood Investing Report” report to read this update.

If you have not ordered this report, and want the link, it is available at Amazon.com. 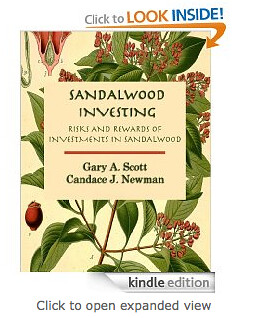 Order the Sandalwood Investing Report for $2.99

Emerging markets offer a good value now and the Emerging Market ETFs offer solid investing opportunity.  These profits however may be a drop in the bucket to the smaller sector of water in emerging markets.

Here is a quote from Benjamin Graham’s  (Warren Buffet’s teacher) book,  “The Intelligent Investor”.   This kind of intelligence has nothing to do with IQ or SAT scores.  It simply means being patient, disciplined and eager to learn; you must be able to harness your emotions and think for yourself.  This kind of intelligence is a trait more of character than of the brain.

Good character grows from patience and eagerness to learn.

Discipline comes from good math which is why I am happy to introduce an investing math program aimed at instilling discipline in one savings and investing activity.

R. Smith Ph.D. lost all his savings in 21 months.  He was a math and computer whiz who has crunched numbers for many big corporations. He came upon a mathematical secret that helped him recover the loss and make $309,000 profit in just 48 months.  He calls the secret a “Magical Calculator” and it helps investors calculate exit prices based on an individual stock’s price.

He is offering the “Magical Calculator” to show how to improve your investing discipline.

Here is an example of how this works. We wrote about TFS Corp. a Sandalwood plantation manager,  in January 2014.  We published a report on this businesses and its great ten year value and potential.

That share surprised us by skyrocketing nearly 50% in just over a month.

With such quick results, the question has to come to mind, “Should I sell and take a profit?”

The STS (Smart Trailing Stop) on the stock ticker, when I checked, was 37.8%, which means that is the current trailing stop level as of March 2014 that you would use for that share at its current price.

I am adding this system to my bag of investing tools and will be reporting how it works for me.

Learn how to use the “Magical Calculator” that shows how to improve investing discipline.

(1) WSJ Investors are settling in for another ride in emerging markets.