There is a potential that the worst dollar debt problem is expanding. This can erode the dollar’s purchasing power. 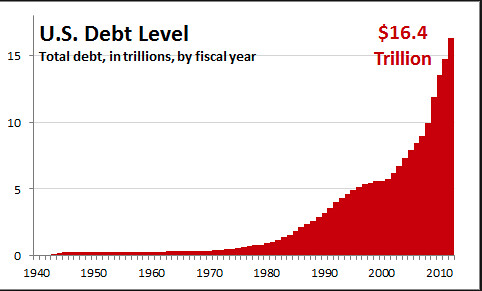 US Debt chart from www.factcheck.org

The current dollar debt problem is not what you might imagine.

Roman politics were a lot like those of today.  This allows us to improve the accuracy of our here and now investment predictions by looking at what happened two thousand years ago.   Horace, the son of a freed Roman slave, became one of Rome’s greatest poets waxing eloquently about the virtues of moderation and simplicity.

He is attributed to a great quote that applied to politics and economics then and applies to them now.  That quote:

If there is genius in the US Congress and Executive Administration, an extra flow of cash does not reveal it.  Evidence of this fact is the chart above.

This chart shows that the greatest rise in US debt came immediately after 2000.  A portion of the graphs below from Taxpolicycenter.org table show US receipts, outlays and deficits.   The chart shows that the year 2000 had the largest Federal income surplus since 1945.

Everyone knows about the ebb and flow, the peaks and valleys of all things.  Everyone knows not to base projections based just on peaks… except perhaps a prosperous government.

This is why the Wall Street Journal Article entitled “The Revenue Rolls In” serves a warning.

The article says:  Federal tax receipts are up 8.2%, not counting Fannie Mae’s windfall.

Though the press corps isn’t reporting it, this is turning out to be a boom year for Uncle Sam.  Federal tax revenue is hitting new records, even with mediocre economic growth.  The Congressional Budget Office reports in its April budget update that tax revenues for the first seven months of fiscal 2014 are up 8.2% to $1.74 trillion, or $132 billion more than a year earlier. That’s probably bigger than your raise this year.  Individual tax receipts are up 3.6% due to higher rates, payroll levies are up 12.2% and corporate income taxes have soared by 14.5% to $156 billion.

By the way, this revenue boom doesn’t include $57 billion from Fannie Mae and Freddie Mac.  Thus federal spending looks $57 billion lower in the first seven months than it actually is.  The federal deficit was still $301 billion through April, which is down from $488 billion but should still be much lower five years into an economic expansion. But don’t blame taxpayers, who are certainly doing their part.

This is the warning. The greater the US debt, the more likely the purchasing power of the US dollar will fall.

If your investments and income are purely in US dollars, please know that this is a warning.

Learn how to diversify currencies for investment safety at the ENR Asset Management’s website.

Get specific details from Thomas Fischer at Thomas@enrasset.com