May I outline five screwy problems that suggest that we… the public… are being screwed and… are about to be screwed more?  Then let’s share a great solution to the mess. 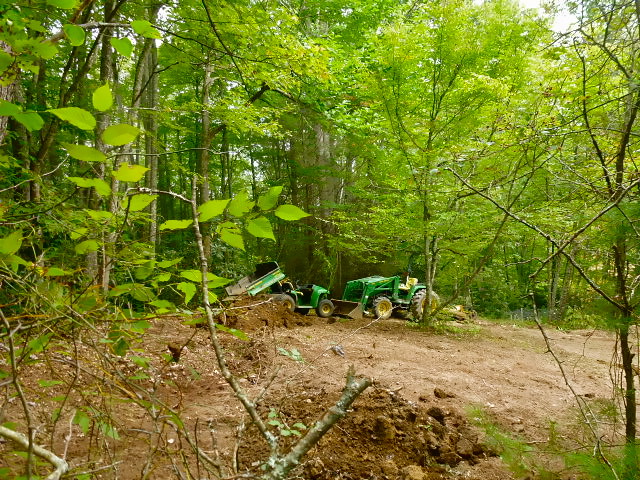 Start of our medicinal garden. 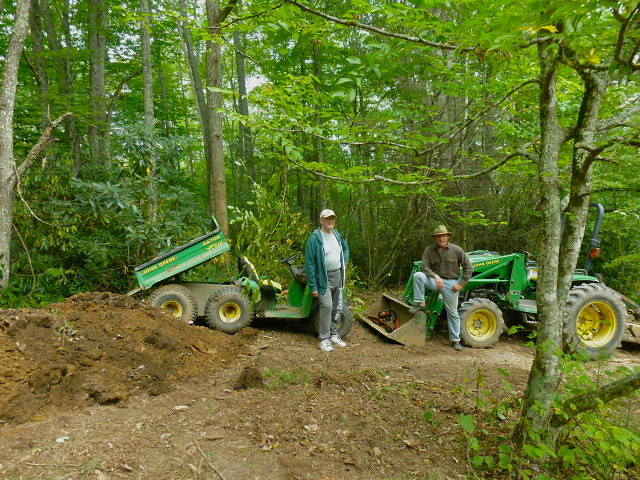 Frank Clark and I clearing the garden site.

Sometimes I am amazed at how circumstance and intuition puts me right in the path of progress.  Numerous articles at this site are about ginseng and the value of north facing mountain farmland.  This land is mostly ignored but contains a bounty of medicinal plants such as ginseng. The land sells at low prices, but offers good agricultural or recreational opportunity.

Recently my ginseng mentor, Scott Walworth, said…” Gary you need a medicinal garden”.  Scott is a retired firemen and believes in self sufficiency. He said… “If the medical system breaks down you want to have your own pharmacy in the back yard.”  He is right.  I do… so I called our friend Frank who recently moved up on the farm and said “Here is an opportunity to play… (work) in the woods.  So I pulled the boys toys… ugh I mean serious farm implements out of the barn and we started clearing a site just above our house.

I have been working on this for the last week when, I  read yesterday’s New York Times and realized what was happening.

Many years ago I had the privilege of speaking at a seminar in Denmark with Rolf Jensen, a futurist and author of the “Dream Society” a book about the future that has come amazingly true.  One point that Jensen made stuck with me…  “You can see the future in the present”.

That thought kept reverberating as I read yesterday’s New York Times because there were  five articles that show how much the system is being used to take advantage of the majority by a few.

Fortunately a sixth article shows what we can do about this… how to survive and prosper the screwing of the nation and surprise… surprise… it had to do with medicine and gardening.

Let’s look first at the five ways we can see the public getting screwed.

Screwed #1:  The pubic is getting screwed in the economic recovery.  The first NYT article “Household Incomes Remain Flat Despite Improving Economy” by Annie Lowrey shows why this is true.   Here is an excerpt.   The poverty rate was unchanged in 2012.

WASHINGTON — Despite the addition of more than two million jobs last year, soaring corporate profits and continuing economic growth, income for the typical American household did not rise in 2012 and poverty failed to fall, new data from the Census Bureau show.
Multimedia

“The poverty and income numbers are a metaphor for the entire economy,” said Ron Haskins of the Brookings Institution. “Everything’s on hold, but at a bad level.”

Over a longer perspective, the figures reveal that the income of the median American household today, adjusted for inflation, is no higher than it was for the equivalent household in the late 1980s.

For all but the most highly educated and affluent Americans, incomes have stagnated, or worse, for more than a decade. The census report found that median household income, adjusted for inflation, was $51,017 in 2012, down about 9 percent from an inflation-adjusted peak of $56,080 in 1999, mostly as a result of the longest and most damaging recession since the Depression. Most people have had no gains since the economy hit bottom in 2009.

The recent article shows how since the end of the 2007 recession, the rich have grabbed more of the national income, at the cost of the general public, than since 1930.

Screwed #2:  One of the biggest costs for Americans is health care. A recent article showed how 17.6% of our GDP is spent on this.  That’s 2.5 times above the global average of developed countries.

Among the most troubling questions facing consumers as they shop for insurance under the Obama administration’s new health care law is whether the plans will cover the drugs they take — and how much they will have to pay for them.  But with less than two weeks remaining until enrollment opens on Oct. 1, the answers are still elusive and anxiety is growing for consumers whose well-being depends on expensive medications.

The plans offered in the marketplaces must cover a minimum number of drugs in every treatment category, with the exact count set by a representative commercial plan, known as a benchmark plan, that is designated in each state.

But how many drugs will be offered under the plans is only a starting point. Perhaps more significant is how much patients will be asked to contribute toward the cost of those drugs. Only a handful of states have released those details, but advocates for patients with chronic diseases and those in the drug industry say they are troubled by what they have seen so far.

Now the screwing gets worse because the same NYT shows that the health system which is devastating the finances of so many may also kill them in the process and yet… little is being done about this.

Screwed #3:   The September 19, 2013 NYT article “The Antibiotic Resistance Crisis” by The Editorial Board says:  The overuse of antibiotics in medicine and agriculture has long been known to foster the emergence of germs that are resistant to drugs. On Monday, the Centers for Disease Control and Prevention issued the first solid numbers on the extent of the problem. It said that at least two million Americans fall ill from antibiotic-resistant infections each year, of whom at least 23,000 die from the infections, a very conservative estimate.

The agency warned of “potentially catastrophic consequences” unless prompt action is taken. It said that up to half of the antibiotics prescribed for people are not needed or appropriately used (as when a broad spectrum antibiotic is used instead of a more targeted drug).

Overuse of antibiotics on farms, where they are often used to promote growth and prevent disease in healthy animals, also contributes to development of resistant strains of germs.

The new report, for the first time, puts 17 drug-resistant bacteria and a dangerous fungus into three categories based on how big a threat they pose. Three were deemed “urgent threats,” including a bacterium, known as CRE, that is resistant to most drugs and kills a high percentage of people who become infected with it. Though it is rare, causing 600 deaths a year, it has been identified in health facilities in 44 states. Further spread of the germ or transfer of its resistance genes to other germs could lead to a “nightmare scenario,” the agency said. Twelve drug-resistant strains, including such common germs as salmonella, tuberculosis and MRSA, were classified as “serious threats.”

The message to me is STAY AWAY FROM HEALTH FACILITIES!

So if the system is becoming more expensive as it becomes more dangerous… who is reaping the profits?

Screwed #4:  Again an article in yesterday’s NYT “Reaping Profit After Assisting on Health Law” by Sheryl Gay Stolberggives us a glimpse of an answer. Here is an excerpt:  Washington’s health care revolving door is spinning fast as the new online health insurance marketplaces, a central provision of President Obama’s health care law, are set to open Oct. 1. Those who had a hand in the law’s passage are now finding lucrative work in the private sector, as businesses try to understand the complex measure, reshape it by pressing for regulatory changes — or profit from it.

That means boom times for what might be called an Obamacare cottage industry, providing work for dozens of former administration and mostly Democratic Congressional officials whose immersion in health policy minutiae, and friendships, make them invaluable to private business.

Reading this could make one mad or go mad.  In fact it does many… but we cannot let anger overcome our common sense.  We now also know that if we are too politically active, the IRS may come knocking at our door.

I do not like these facts but am not going to let them stop us from doing what we can to enjoy a wonderful lifestyle despite these frailties in the system… which by the way are nothing new.   Remember “Atlas Shrugged”… “1984”…  “Brave New World”.

So what do we do?

Merri and I are so lucky… we have tried to live on the leading edge and tried to be one step ahead of an exciting trend that can help us stay ahead of the breakdowns in the system.  In the 70s we became leaders in multi currency investing so we and our readers were not devastated by the fall of the US dollar.  In the 1990s we fell in love with Ecuador… which has shown an incredible growth as many North Americans have chosen to vote with their feet and leave their original home.

Then we purchased farms in the USA and have been helping readers develop multi dimensional lifestyles.

Multi dimensional lifestyles with agriculture has become a big business.

Yesterday’s NYT  and USA Today showed us five ways we are being screwed, but the same NYT issue also shares a solution to all these problems… interestingly enough in “Writing to sell”.

Solution for all 5 Screws:  The NYT article “A Magazine for Farm-to-Table by Christine Haughney” shows how to be more “self sufficient”.  Here is an excerpt. The bolds are mine:  When a fledgling magazine gets former President Bill Clinton to contribute an article, you would think he would be featured on the cover. But the cover model for the current issue of the quarterly Modern Farmer is a sleepy-looking goat. Mr. Clinton is mentioned between articles on outer space farming and soil cuisine.

The magazine, which offers advice on building a corn maze and articles on the effect of climate change on lettuce and oysters, is trying to carve out a new niche on the newsstand. It edges into the food magazine sphere with luminous photography of vegetables, while articles report on straight agricultural topics more often found in farming publications like the 111-year-old Successful Farming.

Modern Farmer, which began publication in April, is trying to benefit from the first signs of growth in the total number of farms since World War II and the farm-to-table food trend that has fueled growth for farmers’ markets and community-supported agriculture. That means the magazine has attracted readers who include an Amish farmer and vegetable supplier to Whole Foods, Brooklyn rooftop farmers harvesting kale and broccoli and myriad young farmers going back to the land.

Long term readers know that we have a 252 acre farm in North Carolina and a 16 acre grove in Florida as well as a 960+ acre hacienda in Ecuador.  Broadband and the internet changed everything and allows us to support our farming efforts with our writing and seminars.

No one can totally predict the future… there are too many unseen bends in the road. Who could have predicted the internet 30 years ago?   We can though see where the paths into the future are heading now and one of the super freeways into the future in North America seems to be headed for a collision against free and low stress living.

Options include moving abroad.  Another is investing abroad.  Earning global can help and becoming more self sufficient is also a logical alternate path.

October 4-5-6 2013 International Investing and Business seminar provides insights into all these areas…how to invest globally for greater safety… how to write to earn… and how to create a multi dimensional lifestyle…how to move to Ecuador….  Multi dimensional sustainable living with agriculture is becoming big news so we have asked my gardening mentor here in North Carolina to come along.

He’ll have some ginseng seeds available as well as information on growing sustainable medicinal gardens.

A Magazine for Farm-to-Table

← Author Scott Nicholson on Self Publishing US Dollar Protection Review →