All You Need is Love

All you need is love.


There is some very powerful scientific evidence that  supports this well known phrase.  The act of turning your passion to profit is a real medicine that improves health and supports longevity.

There are some great examples of this… such as Yoko Ono. 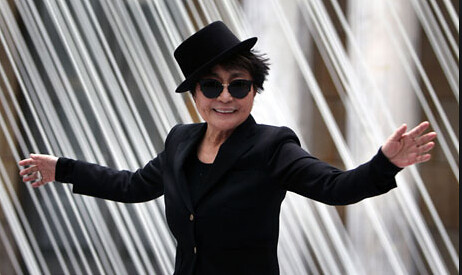 This photo is from the Guardian.com article Yoko Ono: Happy 80th Birthday.

That Guardian article says:  She should be taking it easy as she enters her 80s. “I will put my feet up when I’m in a coffin,” she said last year, “but until then I will do my best to have a full life.”

A full life means active life as she celebrated her 80th birthday with her son, Sean Lennon, and plan a gig with the Plastic Ono Band in Berlin.  A retrospective of her art has just opened in Frankfurt.

In another interview in Times magazine (see video link below) she was asked:  “Do you think you’ll retire”?  Her reply: I never thought of it. It would be so silly to retire now. Its like my second life is opening up. When I became 70, I thought, Wow, it’s great!  I’d like people to know. especially women.  They’re always thinking, I’m going to be 40!  What am I gong to do?  Well 70 was great. Eighty’s even better.

When asked in another interview about her new album the reply was… “This is the best album I have done in 80 years.“

This is a true example of a “Sager”…  a person who gains more from the benefits of experience than spends on the cost of  age… at work.

You can do this to!

Evidence of Love’s Power
In his book the “Outliers” Malcolm Gladwell tells of Roseto, Pennsylvania a town that had created its own tiny, self-sufficient world.

In the 1950s a physician Stewart Wolf had a summer house near Roseto and learned that people from Roseto under the age of sixty-five rarely had heart disease.

Heart attacks were an epidemic in the United States at that time.

Wolf arranged for the entire population of Roseto to be tested and found that almost no one under 55 died of a heart attack, or showed any signs of heart disease. The entire death rate in Roseto, was thirty or thirty-five percent lower than the norm.

They tested dietary practices and found that the diet was terrible. 41 percent of their calories came from fat.  The people did not got up early, do yoga, do special exercise. They smoked heavily and many were struggling with obesity.

Relatives of the Rosetans who were living in other parts of the United States, were tracked down and did not have such good health.

He then looked at the region. No other nearby community had such good health.

Gladwell wrote:  What Wolf slowly realized was that the secret of Roseto wasn’t diet or exercise or genes or the region where Roseto was situated.  They looked at how the Rosetans visited each other, stopping to chat with each other in Italian on the street, or cooking for each other in their backyards. They learned about the extended family clans that underlay the town’s social structure. They saw how many homes had three generations living under one roof, and how much respect grandparents commanded. They went to Mass at Our Lady of Mt. Carmel Church and saw the unifying and calming effect of the church. They counted twenty-two separate civic organizations in a town of just under 2000 people. They picked up on the particular egalitarian ethos of the town, that discouraged the wealthy from flaunting their success and helped the unsuccessful obscure their failures.

In transplanting the paesani culture of southern Italy to the hills of eastern Pennsylvania the Rosetans had created a powerful, protective social structure capable of insulating them from the pressures of the modern world. The Rosetans were healthy because of where they were from, because of the world they had created for themselves in their tiny little town in the hills.

Wolf and Bruhn had to convince the medical establishment to think about health and heart attacks in an entirely new way: they had to get them to realize that you couldn’t understand why someone was healthy if all you did was think about their individual choices or actions in isolation. You had to look beyond the individual. You had to understand what culture they were a part of, and who their friends and families were, and what town in Italy their family came from. You had to appreciate the idea that community — the values of the world we inhabit.

To sum this up, you can be healthier when you belong to a supportive community or family.  Yet the modern world… a global economy, easy transportation and broadband communication provides efficiencies at the loss of geographical family.  Modern life fragments family.  What can we do?

The way to put this into action is by turning your passion into profit and at the same time creating your own family through purpose, interest and service.

Merri and I discovered this about 25 years ago in Vienna, Austria while we were conducting a course there.  One of our older delegates, had some sort of attack. The first fear was heart trouble. Several delegates took him to the hospital.  Others stayed with him there. I don’t think that delegate was alone for a minute!

What impressed Merri and me was that no one asked the delegates to help this man.

The friendships of delegates sharing many courses had just grown so strong that it was a natural reaction, just as if a family member was ill. Fortunately, it was only travel fatigue.

In a way our meetings are almost like family reunions. Perhaps it is getting together and reflecting on what has been said and what has been happening.  We have even had a couple of marriages (that we were informed of) grow from meetings at our courses and seminars.

Learning with those who are also interested in the world creates thoughts that multiply the value of what we gain.  This is hard to describe but results are most powerful and wonderful!

This is so fulfilling for Merri and me as our biological family are spread around the world, Oregon, Florida, across England and Australia.   To us our friendships in our service are as important as the finances.

Turn your passion to profit. Put your purpose first.   Serve at something you love and figure out how to make the process pay its way. You can never imagine the good you’ll do.

For example one reader sent me a note saying:  “Dear Gary and Merri, Spurs Dreams!
You are changing far more lives than you may realize, and in such positive ways! Let me share some great news that started with the two of you in dear Ecuador.  Just by happenstance, anther delegate and I attending your International Investing Course when daylight savings time was ending.   We both forgot to set our clocks back. We were the only ones that arrived for class an hour early. Over the course of that week, I learned to admire him and thought the friendship might last.

Unbeknownst to either of us, this predisposed chance encounter could end up literally helping millions of people.
We created an innovative internet project that would help fund literally thousands schools across America and actually filed for a patent on the system. After returning to North Carolina, I decided I had to be part of this mission. Since we left Ecuador we have worked diligently to develop a national foundation that I believe we will be one of the largest fundraising programs in the country. CNN has shown interest in our story, and we are waiting for the opportune time to launch the story.  I want to thank you and Merri, for you are truly one of my many blessings. Please share our story, one that has not only impacted our lives, but will positively impact those in need across America!”

Attract like minded souls.  All you need is the willingness to serve and love.