Here is how to get a green light to natural health from red one.  The Western mindset does not pay much attention to colors and what they mean and do.  We should, though, because green is good and red is an ultimate form of purification.

When Merri and I lived with the Ecuador yatchak, he was always focused on purification.  He provided purifying teas, herbs, food, drink and ceremonies.   He even had a purification routine where a person is buried to the neck up in purifying earth.  One practice that permeates every healing ritual is purification.  Andeans, Amazonians, Tibetans, Indians, Mayans, Sufis, even Western medicine all have forms of internal and external cleansers.

Purification is good because we are inundated with poisons that we touch, smell and inhale just in the process of being in the modern world.   This poisoning is almost inescapable.  For example a recent message Fishy Warnings on Natural Health looked at positive ways to get Omega 3 with natural astaxanthin but as showed that synthetic astaxanthin that is in a lot of fish oil may poison rather than purify.

So we must ask, why is natural astaxanthin so important to natural health and what is wrong with synthetic astaxanthin? 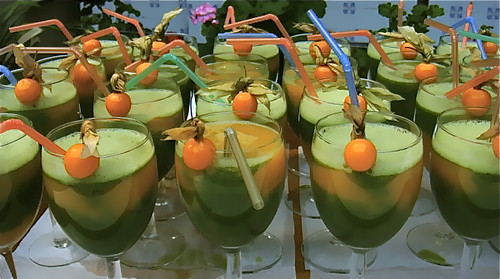 Ecuador shamans have taught us many cleansers. One is a great drink we serve at our Cotacachi hotel Inn Land of the Sun… alfalfa with mango.  Nutritious… and delicious!  Alfalfa is one of the natural cleansing green drinks.

A Look at Red in Natural Health

One could view Astaxanthin as concentrated or stored sunlight.

The natural health qualities of astaxanthin come from its pigment’s ability to absorb the sun.

This causes  astaxanthin to have powerful antioxidant anti-inflammatory qualities.

Astaxanthin is 65 times more powerful than vitamin C as a free radical scavenger and has a special ability at “singlet oxygen quenching,” that soaks up the unstable form of oxygen that creates a damaging effect when exposed to sunlight.

Astaxanthin is especially effective in the eyes, brain and central nervous system as it crosses the blood-brain and blood-retinal barrier. This helps reduce the indigence of cataracts, macular degeneration, blindness, dementia and Alzheimer’s disease.

The primary natural source for astaxanthin is the algae Haematococcus pluvial, a freshwater species of Chlorophyta.

Chlorophyta are a type of green algae known as chlorophytes.

Chlorophytes are photosynthetic. This means they use chlorophyll to capture light energy, which fuels the manufacture of food – sugar, starch, and other carbohydrates. This is what also gives these algae their green color.

This algae is special though because at certain stages it turns red by producing high amounts of astaxanthin to protect itself from bright light, high salinity, and low availability of nutrients.

The red color in this algae is caused by astaxanthin which is believed to protect the resting cysts from the detrimental effect of UV-radiation, when exposed to direct sunlight.  In other words for this algae to live with green it cannot have too much sunlight so it produces a red pigment to absorb and store certain parts of the sunlight spectrum.

We’ll question the important big picture of this red pigment to natural health in a moment.

Astaxanthin is used commercially in the human food chain because fish and poultry raised without sufficient sunlight has an unappetizing color.

The introduction to a study on the use of astaxanthin in poultry, at the Department of Food Science and Technology of Chungnam National University in Daejeon South Korea,  explains the commercial reason why it’s put in fish and chicken feed.

The introduction says: Color of chickens greatly affects the purchasing behavior of consumers (Han et al., 1987; Fletcher, 1999). Corn, a usual ingredient of chicken feed, is the major source of carotenoids pigmenting egg-yolks and bodies. Poultry accumulate carotenoids mainly in liver, skin, and shank (Allen, 1988). Since carotenoids are not produced by chickens, they must be supplied in feed for pigmentation.

Putting natural astaxanthin in food may be quite good as a powerful aid to natural health.

The problem is that astaxanthin is very expensive to produce.

The best source of this pigment, after the algae itself, is krill and arctic shrimp.

The process of growing the algae, so it is rich in astaxanthin, is complex.  Fishing for krill or arctic shrimp is complex, done in Antarctic waters, under extreme weather conditions and far away from ports with substantial operational complexities.

So natural astaxanthin is expensive and most commercial astaxanthin for aquaculture is produced synthetically from petrochemicals.

The key is Chlorophyll.  Back to those algae Chlorophytes that use photosynthetic chlorophyll to create life. Chlorophyll is the hemoglobin of plants.  Molecules in Chlorophyll are similar to the hemin molecule of hemoglobin.

Chlorophyll the cleaners.   Green drinks are cleansers because they contain a lot of chlorophyll. Alfalfa for example is loaded with chlorophyll.   Chlorophyll helps improve anemia and detoxifies blood and liver.  When ingested as a food nutrient, chlorophyll actually increases blood production, as it readily changes into the hemin molecule of hemoglobin.

The title of a report from the Ohio State University entitled “Hemin and Chlorophyll : the Two Most Important Pigments for Life on Earth” by Paul Rothemund gives us a clue about the importance of green and red to natural health and life itself.

An excerpt says: Two chemical processes are the prerequisites for all life on earth: the absorption of some of the energy from the sun in the green plants and its transformation into carbon compounds on one hand, and the use of the chemical energy of these compounds by animals in controlled decomposition reactions on the other.

The numerous chemical reactions involved in photosynthesis and in respiration are catalytically controlled: the green coloring matter of the plants governs the uptake of radiant energy, and a red pigment directs the oxygenation of blood in the lungs of animals.

The report points out that though 96% of blood differs among every animal, the pigment which represents 4% of all blood is identical in all animals.

Then the report says:  A very close relationship exists between hemin and chlorophyll on one hand, and
bacteriochlorophyll from certain microorganisms on the other.

There you have it green and red…  Hemin and Chlorophyll… the things within us that connect us all.  Man, horse, dog and monkey… every living thing with blood… though vastly different… all depend on chlorophyll and its transformation into hemin.

Everything eventually comes from the sun.   We get at least part of it from chlorophyll and hemin… a part of which is astaxanthin.

Here is the question that comes when I think about this.  What if synthetic astaxanthin is something like Carbon Monoxide… so similar to a life giving element that the body replaces that element without warning.   Except as we know Carbon Monoxide is not life giving, but is a poison.

My concern is that synthetic astaxanthin replaces natural astaxanthin and in this process fools the body into feeling okay while depriving it of the natural elements of life.  I do not know of any specific studies that give evidence to this… but hemin is such a vital part of natural health doesn’t it make sense to avoid food that incorporates  synthetic astaxanthin?

Learn how to get Omega 3 supplements without fish oil that may contain synthetic astaxanthin. Click here.

All of our seminars and courses…”International Investing and Business”…  “Writer’s Camp” and “Super Thinking + Spanish” include sessions on how to enhance everlasting wealth with natural health.  Join us for all our courses free as an International Club member.

Read the entire report on hemin and chlorophyl here.