Here are the Multi Currency Major Market Value Updates for the summer 2013.  Stocks are statistically likely to be up… but Wall Street is more likely to be down in the months ahead.  See why below 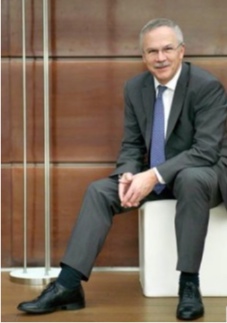 Is the US stock market too high?  Are other equity markets a better value?   Should one put more in markets or cash out and take a profit?

Having been involved with Wall Street and stock markets for 45 years I promise you… asking the questions above  will drive 99% of the investing public mad.  If you try to time markets… in the long run… you will lose.

This is why we track the global share analysis of Keppler Asset Management.

Here is a short review of the spring 2013 value update for developed equity markets around the world.  Once a quarter we look at a major and emerging equity market valuation analysis by Michael Keppler.  Michael’s firms are the best when it comes to value analysis of stock markets.

Here is an update on the values of major stock markets is of July 16, 2013 by Keppler Asset Management.

Global Equities plunged in late May after Bernanke told a congressional panel that the Fed might slow down its monthly bond-buying program. This correction was over soon, however, when all four major monetary authorities in the US, Europe, Japan and the UK made clear that they will stick to monetary easing for an extended period.

Compared with their end of March levels, stocks were little changed. The MSCI World Total Return Index (with net dividends reinvested, December 1969 = 100) finished the second quarter +1.7% on local currencies, +0.6 % in US dollars and -0.6 % in Euro.

There were no changes in our performance ratings last quarter. The Top Value Model Portfolio now holds the ten “Buy”-rated markets at equal weights. According to our analyses, a combination of these markets offers the highest expectation of long-term risk-adjusted performance.

Global equities continue to be attractively valued compared with current and historic valuation ratios and rates of return – even if the current low interest environment and dismal investment alternatives are not taken into account.

Chart two below shows the entire real-time forecasting history of Keppler Asset Management Inc. for the Equally Weighted World Index. Our numbers are based on relationships between price and value over the previous 15 years.

Growth rates of important fundamentals continue to hover around the levels reached in the recent past: Annual book value growth for the Equally Weighted World Index in local currencies is running at 7.5 % at the end of June – up from 6.8 % at year-end 2012, though below the 8.5 % growth reached at the end of March.

With fiscal policies becoming more restrictive in many countries, the arguments for rising stock prices have not changed lately.  They focus on:

(1) a continuation of monetary easing, which was explicitly pointed out by the four leading monetary authorities in the US, Europe, Japan and the UK;

(2) opportunity costs, i.e. the lack of investment alternatives – basically all major asset classes (commodities, precious metals, real estate and, most of all, bonds) have seen major bull markets since the beginning of this century; and

(3) valuation multiples for common stocks trending higher.  Multiple expansion, which had been pointed out on several occasions in our recent quarterly reports, continues to be intact. The price/earnings ratio of the Equally Weighted World Index bottomed in September 2011 at 10.8 and had moved up to 14.2 by December 2012. Its latest reading at the end of June is 15.3, which equals its 43 1⁄2-year average.

Compared to historical levels – we experienced P/E-ratios in the high twenties on several occasions in the past – this is far from being excessive. Therefore, I do not see any reason why multiple expansions should not continue in the current low-interest environment.

Keppler’s value analysis suggests that investments in equities should continue to see strong appreciation annual total returns of between 7.3% and 18.7 %, per annum.   The review further suggests that the US equity market is one of the six markets that is least likely to provide the best returns.

Here are the value rankings of all the developed equity markets that Keppler follows.

The chart below is from the full 85 page value update available to Borrow Low-Deposit High subscribers (subscribers click here for the full report) and shows the neutral and poor value ranked markets.  See below how to subscribe. 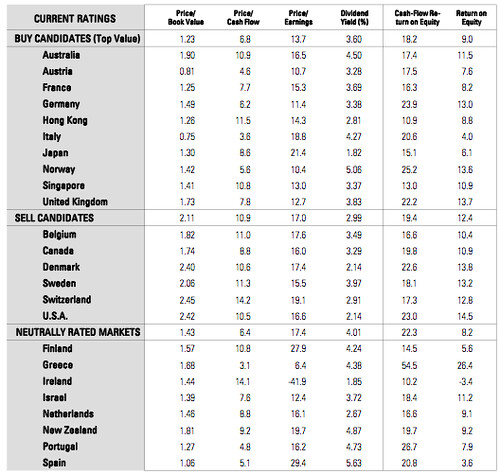 According to Keppler’s analyses, a combination of the Sell markets offers the lowest expectation of long-term risk-adjusted performance.

In other words a portfolio of equities in the US, Canadian, Danish, Belgian, Swiss and Swedish equities statistically are most likely to under perform in the long run.

Two of the most important lessons we can know about investing is that all markets long term are driven by economic fundamentals and their performance can be accurately judged.   All markets are driven short term by emotion and their short term movement can never be known.

This is why the equity portion of my portfolio is overweighted in Germany, UK, Italy, Singapore as well as Water and Renewable Energy.

Order  “Borrow Low Deposit High – How to Use the Multi Currency Investment Sandwich”  $79.