Last week I started something I have wanted to do for a long time… grow Ginseng.

For years I have suggested buying land away from the maddening crowd for instance in Ashe County.  See an article posted at this site many years ago at https://www.garyascott.com/lostprovince/203/index.html for a complete description of the reasons I feel this is a better place than most. 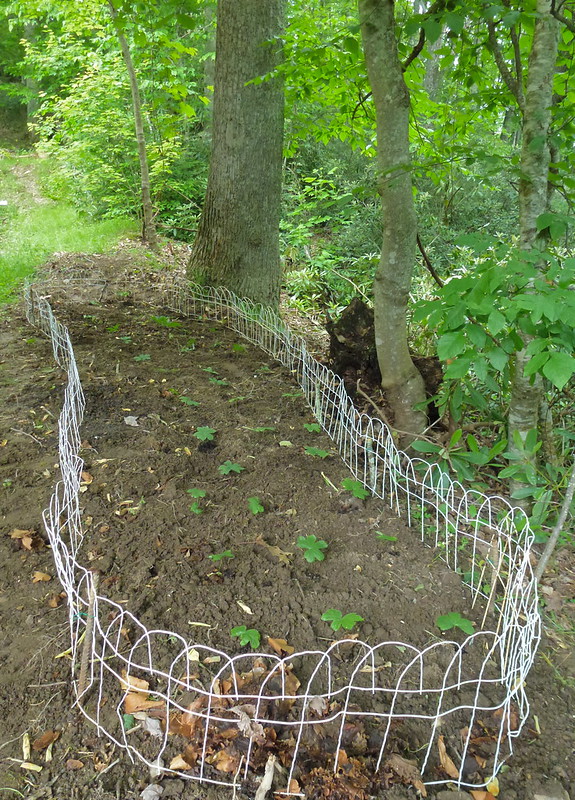 Ginseng can provide a better retirement for me… and perhaps with you, in at least four ways.

First, Ginseng is a really valuable crop, with the wild root selling for as much as $700 a pound.  Last year it sold for an average of $410 per pound. 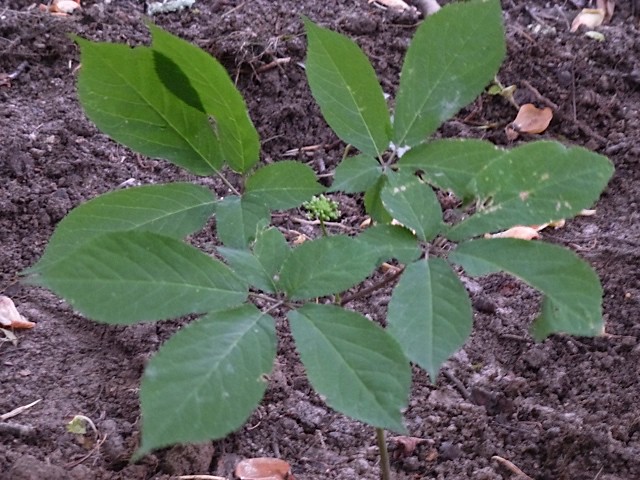 Ginseng in our yard.

It takes about 300 roots to make a pound of ginseng, but it happens that north facing woods are a perfect place to grow it.

Goldenseal, another slow growing north facing plant is highly valued also so I have planted that as well.

Even though a license is required to harvest it wild, poachers can be a threat. One Ohio farmer was charged last year for shooting a man who was poaching his ginseng so I planted this right behind the house. 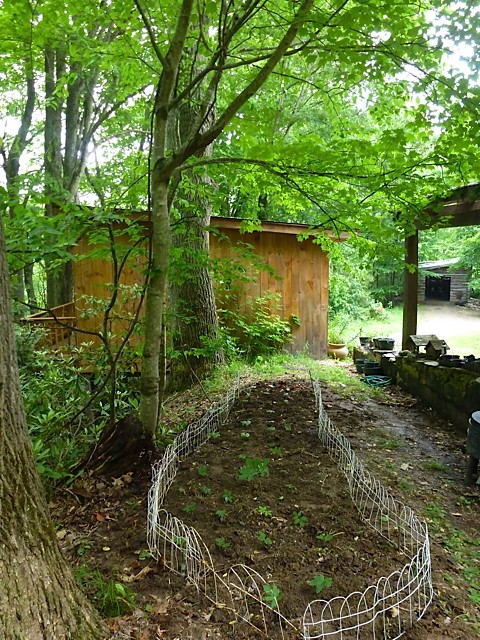 Here is goldenseal in our yard. 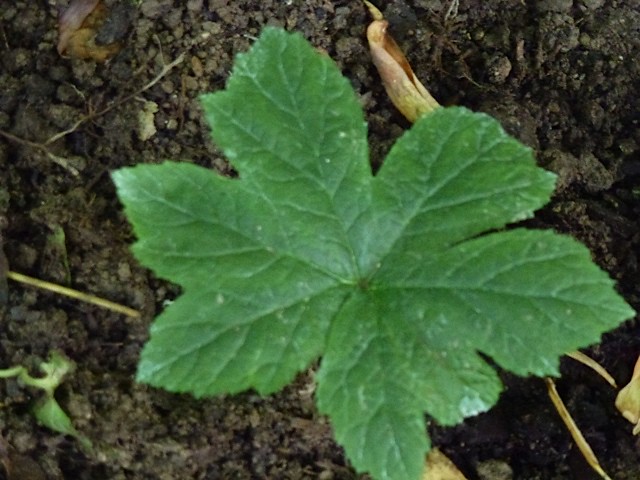 I believe that thousands of acres of what appears to be useless land can be purchased in Ashe County a very low prices.

Second, Ginseng can help create a better retirement by protecting against a falling US dollar.   This crop may be or can be full of gold…green gold.

An article in washingcitynews.com entitled “Million-Dollar Man Root- How a Maryland ginseng farmer is rolling back our trade deficit with China” by Franklin Schneider shows how profitable ginseng can be.

Here is an excerpts (bolds are mine):  Deep in the Maryland woods, under thick tree cover and hidden in plain sight amid the forest undergrowth, Larry Harding grows his prized crop. Harding’s strain is well-known for its special potency and, come harvest time, he parcels it out and offloads it to connoisseurs overseas for top dollar. Poachers are a constant threat, and Harding says he patrols with his 12-gauge. Back in 1993, the Drug Enforcement Administration raided his compound, overturning barrels and interrogating Harding about money laundering. Harding lawyered up, won a settlement, and went back to harvesting. Depending on the weather and the market, he makes between $250,000 and $1 million a year.

At a time when the Chinese are getting rich exporting to Americans, Harding is a countertrender: an American getting rich exporting to the Chinese. In the world’s most populous country, ginseng (from the Chinese ren-shen, meaning “man root,” due to its multilimbed, manlike shape) is like coffee, Viagra, and Prozac all rolled into one, with a dollop of quasi-religious mysticism on top. People take it for everything from depression to arthritis to impotence, and they’re willing to pay a premium for it. A single ­thousand-year-old root was recently auctioned off in China for more than a quarter-million dollars, and in 2005, two Korean businessmen bought a set of six roots for $120,000, purportedly to heal their mother’s bad knees.

As China becomes more affluent, an emerging middle class is claiming a ginseng supply once divvied up among the elite. The increasing demand bumps the value; it’s now common to sell ginseng for up to $1,000 per pound. While China has about four times as many citizens as the United States, it has about half the arable land, and a large portion of that is farmed by hand, so meeting the demand needs all the help—i.e., imports—it can get. Right now, the United States exports a little more than $50 million a year in ginseng, but as word spreads and prices skyrocket, expect that to balloon.

The Harding farm is a testament to agricultural adaptation. Seventy acres of rocky land is covered with thick timber, a series of sloping planes divided by creeks and washouts. Traditional row-by-row, combine-driven farming would be impossible here. Even if you clear-cut the forest and cleaned out all the rocks, the slopes would just wash away in the first hard rain. But ginseng can grow only in the shade, generally on or near a slope, and it thrives in the presence of certain trees and weeds. And since the root absorbs nutrients and toxins alike from the surrounding soil, overseas buyers strongly discourage the use of pesticides. In many ways, ginseng is a farmer’s dream come true: It grows on otherwise unusable land, fetches exorbitant prices, and requires little or no maintenance.

In between the real stuff and the tarpaulined ginseng is “wild-simulated,” which is what Harding grows. This is ginseng grown under tree canopy and amid native undergrowth, in a cultivated-slash-uncultivated setting. These roots, harvested after five to 10 years, fetch about half the price of a wild root—around $500 per pound—though in many cases you can’t tell them apart. (Harding never mixes roots, though he says the practice is common among poachers.) Harding’s had his wild-simulated roots tested for potency and says they compare quite favorably to wild roots.

The Cherokee had a ginseng-hunting tradition where they’d leave the first three plants they found, and only harvest the fourth one. While the motives behind this tradition have been lost (darn genocide!), one of its main effects was to maintain a healthy ginseng population. Unfortunately, American ginseng hunters have no such tradition. Nor did the Chinese, which is another reason they buy so much of ours—theirs is mostly gone due to voracious harvesting.

Years of rising prices and rampant overharvesting have decimated the wild ginseng population. Many states have cracked down on ginseng poaching, after years of essentially no enforcement at all, and others have raised the harvesting age from five to 10 years. Still, as long as there’s a root sitting in the ground that people will pay thousands of dollars for, people are going to dig it up, legally or illegally, whether from their neighbor’s backyard or a national park.

This all makes economic sense to me… a lot of  low cost land available to grow a high priced crop. The main market is the second largest economy in the world that is growing strongly.   There is a a minimal investment and little equipment to finance.

The third way Ginseng can help have a better retirement is to help me have a healthy retirement.

Ginseng assists longevity and natural health.  Indigenous Americans used ginseng as a demulcent, a general tonic, as a natural restorative for the weak and wounded and to help the mind.

Edgar Cayce called American Ginseng “the essence of the flow of the vitality within the system itself. It is electrifying of the vital forces themselves.”

Ginseng has proven beneficial in strengthening mental abilities. Ginseng supports the adrenal-pituitary axis and provides increased resistance to the effects of stress as well as improves circulation which helps the learning process.

The fourth reason ginseng can help me have a better retirement is emotional. Having Scottish blood, I like to find value and see a return on my investment. Growing ginseng is a long term venture.  Planting it means I’ll have to stick around and see the harvest.  Being nearly seventy years old… this is good.

Working in the earth is also health and highly satisfying… a high purpose.  Purpose is what makes our retirements enjoyable and long.

The value up here in the High Country is also a no-brainer.  Intensive field-cultivated ginseng farming is expensive beyond the capacity of most potential growers.   Woods assisted farming using a natural forest canopy for shade with the right land makes the farming effort almost disappear.

Ashe County has lots of land that I believe is very undervalued and is loaded with hardwood forests on well-drained, north facing slopes in predominantly porous, humus-rich soils.

There is a heavy concentration of Wild American Ginseng found in the Appalachian Mountains, as it grows wild in the eastern half of North America on hardwood forests on well-drained, north facing slopes in predominantly porous, humus-rich soils.

Get the point?  Ginseng can help create a better retirement in many ways.

Join us in Ashe County and learn about how to have a better retirement with global investing, writing to sell and micro businesses including north slope farming.