Here is a thought on how to create a better retirement and make every day a memorable day.

First, Happy Holiday! Merri and I give thanks to our friends, brothers and sisters, fathers and mothers, grandparents and forefathers for the sacrifices they made to help make a better world.   I am truly thankful as explained at Thankful Simplicity.

Today I am rereading “The Twilight Warriors”. 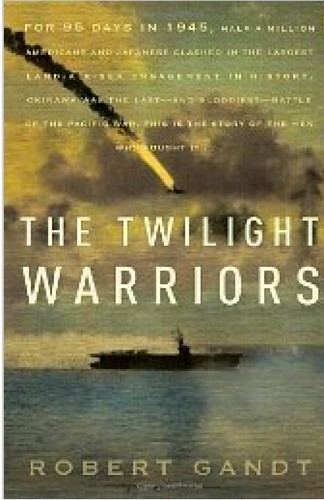 This is a great book for Memorial Day as it recollects the history of the men and women who have served their nation.   This is a fit read for this time and for this age.

On Memorial Day, we intensify our memory for those who have died in our nation’s service.  Let’s remember them and their sacrifices everyday… but set aside this day (or one like it if you live outside the US) as a time of special honor, emotion and gratitude.

“The Twilight Warriors” was written by Bob Gandt. This book tells the story of the deadliest battle of WWII, the invasion of Okinawa.  Bob, a good friend of ours, said  “At  the heart of this story are the real life heroes of Air Group 10.”

“The Twilight Warriors” was given the  RADM Samuel Eliot Morison Award for Naval Literature and the author, Robert Gandt, was honored by the Naval Order of the United States at a ceremony at the Racquet & Tennis Club on Park Avenue, New York City, November 2011.

The prize is named for the late Rear Admiral Samuel Eliot Morison, a Harvard University history professor widely considered to be America’s most distinguished naval historian.

This award in my opinion comes not only from the great historical accuracy but because this history has been   by Gandt in such a compelling form.

The Twilight Warriors relives the drama of the world’s last great naval campaign. From the cockpit of a Corsair fighter we gaze down at the Japanese task force racing to destroy the American amphibious force at Okinawa.

Gandt has crafted a compelling read.  It is impossible to put the book down because Gandt has personalized the story so well.

The story of The Twilight Warriors is made real through the eyes of the Tail End Charlies.

The specific persona that holds the story together is one among the Tail End Charlies… a 22-year-old former art student who grows to manhood on the day of his first mission over Japan and his best friend, a ladies’ man and intrepid fighter pilot, whose life abruptly changes when his Corsair goes down off the enemy shore.

Here is an excerpt from “The Twilight Warriors”:

It was late, nearly ten o’clock, but the party was going strong. You could hear them singing a hundred yards down the street from the officers’ club.

I wanted wii-iings
‘til I got the goddamn things,
Now I don’t want ‘em anymoooore . . .

Getting plastered before deployment was a ritual in the wartime Navy, and the pilots of Bomber Fighting 10 were no exception. It was the night before their departure aboard the aircraft carrier USS Intrepid. The entire squadron had suited up in their dress blues and mustered in the club for their farewell bash.

The party began like most such occasions. Pronouncements were made, senior officers recognized, lost comrades toasted. The liquor flowed, and then came the singing. It was a form of therapy. For the new pilots, the booze and the bravado and the macho lyrics masked their anxieties about what lay ahead. For the veterans, the singing and the camaraderie brought reassurance. Most knew in their secret hearts that they’d been lucky. They’d lived through this much of the war. There were no guarantees they’d make it through the next round.

Leaning against the bar and clutching his drink, Ens. Roy “Eric” Erickson bellowed out the verses of the song. Erickson was a gangly 22 year old from Lincoln, Nebraska. He was one of the new pilots in the squadron. They called themselves “Tail End Charlies.” They flew at the tail end of formations, stood at the tail end of chow lines, and now they were catching the tail end of the war. They’d spent the past year and a half training to be fighter pilots. Their greatest fear, they liked to boast, was that the war would be over before they got there.

The Tail End Charlies stared at the map. They knew some of the place names–Shikoku, Kyushu, Okinawa. Until today that’s all they were, just names. Now reality was setting in. Those places on the map–the ones with the hard to pronounce names–were where they would see their first combat.

But there was more. What none of them yet knew–not the pilots or the intelligence officers or the flag officers planning the operation–was that the island in the middle of the chain, the one called Okinawa, was where the Imperial Japanese Navy would make its last stand.

But there was more. What none of them yet knew–not the pilots or the intelligence officers or the lag officers planning the operation–was that the island in the middle of the chain, the one called Okinawa, was where the Imperial Japanese Navy would make its last stand.

See more and/or order the Twilight Warriors at Amazon.com

Another book I am rereading is “Torpedo Squadron Four –  A Cockpit View of World War II” written  by Gerald W. Thomas and is offered as a Kindle book by Amazon.com.

Thomas describes the purpose of his book as:  This document presents a view of WWII as seen from the cockpit of a torpedo plane and the later rehashed in the Ready Rooms of three aircraft carriers. The focus is on the activities of one squadron, Torpedo Four (VT-4).  When we lost a squadron member, we did not have time to mourn the loss because of the continual pressures of the next combat operation. This historical record compiled 60 years after the end of WWII, is one way to recall and acknowledge those who made the sacrifice.

This may not be a book that Thomas wrote “for the buck”.  Instead I suspect that for 60 years this story was inside him and he just had to get it out.

Because I was never involved in a major military conflict, I do not think I can understand the feeling of surviving and the mourning of the ones lost… the buddies… the best friends… the multitudes who were missing and their fate so often unknown.

I make this observation as the son of a wounded veteran who survived invasions including Iwo Jima.   My dad appreciated every day he lived… any small thing he gained from life.   Just being alive was the miracle.

My dad never spoke much nor dwelled on his year at war but was never able to forget his battle buddies who did not make it. Then in his last years… as his mind slipped just a little… he could not recall all their names…  the guilt  began to overwhelm him… a gathering gray cloud hid his more normal positive attitude.  “I have had this great life and they (my friends) have been gone all these years”… was his growing refrain.

I’ll be presumptive and guess that Gerald W. Thomas was feeling somewhat the same and this book was written as a personal memorial for his lost buddies.  He did not seem to care much about making a profit on this book.   This was a labor of love… a true warrior’s memorial.

My comment is “Well Done! Mr. Thomas”.  This is a thoroughly researched and accurate historical document that helps describe the war from an aircraft pilots’ point of view. 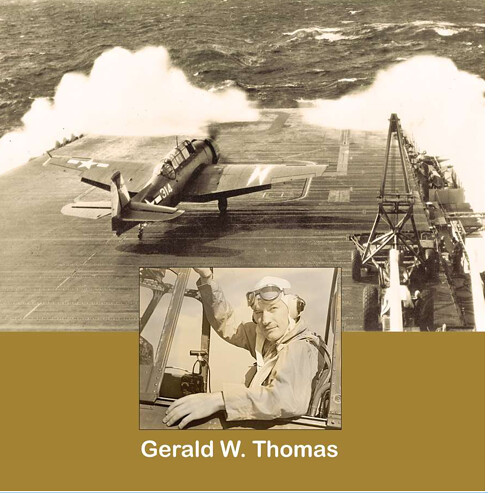 We can gain a lesson from Gandt’s and Thomas’s writing to help us have a better retirement and pinnacle career.

The point is that we can fill our destiny whether as a business or to simply follow a destiny path through writing.

Whatever and wherever your destiny is leading you, perhaps communicating through writing will make the journey more effective and better.

Have a Happy Memorial Day.  If you have memories that you wish to express as a service, for fulfillment, profit or all three, we hope we can help you with our “ONLINE Writing and Self Publishing Course” or one of our upcoming Writer’s Camps.

As our holiday gift to you, we have extended our offer to have Five Free Better Retirement Reports.

This is the last day to receive these reports FREE.