Here is how John  Scalzi is earning with REM FIF.

We can learn a lesson about writing to sell on Kindle from the monetization efforts of John Scalzi, the author of Old Man’s War.

Old Man’s War is a science fiction and debut novel by John Scalzi published in 2005.   It was nominated for the Hugo Award for Best Novel in 2006.  It was optioned by Paramount Pictures in 2011. 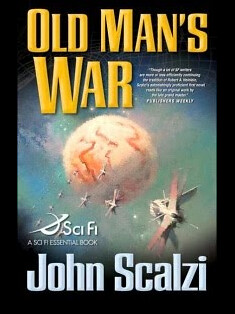 John Scalzi is an American author and online writer, and president of the Science Fiction and Fantasy Writers of America. He is best known for his Hugo Award-nominated science fiction novel “Old Man’s War” and for his blog “Whatever”  he has written daily on a number of topics since 1998. He has also written a number of non-fiction books.

I am a voracious reader.  Many writers are and John Scalzi has been my Sci Fi flavor of the month.  I started with “Old Man’s War”…a four book series… then tried Scalzi’s  “Agent to the Stars” which is a complete turnaround that left me laughing and crying, but was very unlike “Old Man’s War”.

Scalzi is a writer of many dimensions and readers have to take care.  Not all of his books are similar. They cross genre boundaries and a couple of times I found my expectations unfulfilled…  yet he is a craftsman so  though “Agent to the Stars” is very different than “Old Man’s War” once I opened my horizons I enjoyed each.

If you like Sci Fi, I think you’ll enjoy the Old Man’s War series at least but it is Scalzi’s efforts at monetization that is our focus of interest here.

Scalzi writes so much I get tired just reading his bio (linked below) and I write a lot.

He makes apparently never ending tests in how to market and was into online printing at an early stage.

For example Scalzi writes about his Book “Agent to the Stars”:  Several of my books have had strange journeys into print, but the journey of Agent to the Stars is probably the strangest. It began in 1997 as my “practice novel” – that is to say, the novel I wrote to see if I could write a novel (the answer seems so).  I had no intention of ever selling it or ever really doing anything with it.  Nevertheless in 1999 I posted it on my personal Web site, offering it as “shareware” and encouraging people to send me $1 if they liked it. I made about $4,000. It was a nice way to stay in pizza, but I did not expect anything more out of it.

In 2005 Bill Schafer, publisher of Subterranean Press, wandered by the Web site, saw Agent there, started reading it, and then sent me an email asking me if he could publish a limited edition hardcover.  Well  thought it would be cool to finally see it in print, so I said sure.

Subterranean printed 1,500 copies , sold them all and now people are asking (and getting) several hundred dollars for their copies on eBay. I think this is a little silly and wish  had extra copies to sell.  But again, after that I didn’t expect anything more out of it.  And now we are here in 2008, and the book has come round again, this time in a really lovely paperback edition, of which there are more than 1,500 copies and I am officially done underestimating this book, because it clearly does not know when to stop.   I am delighted by this chain of events, and hope you, the reader, are enjoying this little book which just won’t quit.

I purchased “Agent to the Stars” from Amazon for my Kindle so Scalzi’s marketing of the book continues!

There are several interesting lessons to be learned from this.

#1: Put your publications online.  You never know who will read them.

#2: If you print in hardcover.  Keep some copies.  They may become worth more in the secondary market.

#3: Be open to different avenues for sales of your publications.

What Scalzi started in 2013 is of greater interest.   He has picked up on his “Old Man’s War” series with a new “Human Division” series that brings back the Old Man’s War characters.  In 2012, Tor announced that the fifth Old Man’s War novel, “The Human Division”, would be released episodically as several e-books from December 2012 through February 2013 and as a printed book later in 2013. 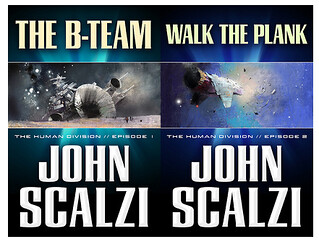 They are publishing a new e-epsiode every Tuesday from January 15, though April 9, 2013.  They are a cross between a novelette and short story. I have read four and they do not seem connected so I can only assume the print book will be a compilation.

Scalzi’s marketing and monetization model makes a lot of sense and shows one direction the publishing industry is taking that is especially suited for independent publishers.

#4: Scalzi’s income stream comes much faster… every week instead of after a year.

#5: The success of each episode works on Amazon.com’s algorithms so when looking at the Kindle top 50 sellers you see many “Human Division” episodes.  This is exactly how I stumbled onto his books.  As successful as he has been, I had never read or heard of him.   I kept seeing “Human Division” series as I scanned for books to read, so asked myself “Why not give one a try?  It is only .99 cents!”

REM stands for Reach, Engagement and Monetization.  FIF is how you monetize… Focus, Inform and Fulfill.

Scalzi gives us perfect examples of reach and engagement that we hear about so often.

For reach, he has Amazon.com’s algorithms working for him.  The B-Team and Walk the Plank hit the USA Today best seller lists in the last couple of weeks.

He also has his existing list of readers who read his daily blog… plus everyone who has read his books.

That is a lot of reach. Then Scalzi uses his blog and Twitter to engage his fans daily.

#1: Focus.  In this case the focus is Scalzi’s Sci Fi… yet he goes beyond. This can be dangerous for a new writer.  Scalzi has enough success to survive the twists and turns that spring from his pen (or rather keyboard).   He brands himself at his blog and through Twitter so his writing can go beyond the strict Sci fi genre.   Writers can do this once a brand is established. To begin… stick to what has been bringing success.

#2: Inform.  Scalzi lets his fans know what’s up in his blog and Tweets.

#3: Fulfill.   This approach to monetization means you have to have a lot of copy. Keep writing. Excite and then incite… ie. give them something more to read.

Most good writers also read… usually a lot.  Keep reading but now when you read look beyond the text… thinking about how that book was sold… to you.  Analyze the selling of the writing as well as the text itself.   Think about the publications REM and its FIF.  Being a good writer is important… but being a good seller of whatever you wrote more important if you are writing to sell.

Learn Ways to Write to  Sell.

#2: Enroll in in our ONLINE course.  You can use the fee later as part payment to a Writer’s Camp.