Technology has skewed modern communications from the “normal curve” (Gaussian) to an “80/20 rule” (Pareto) model. 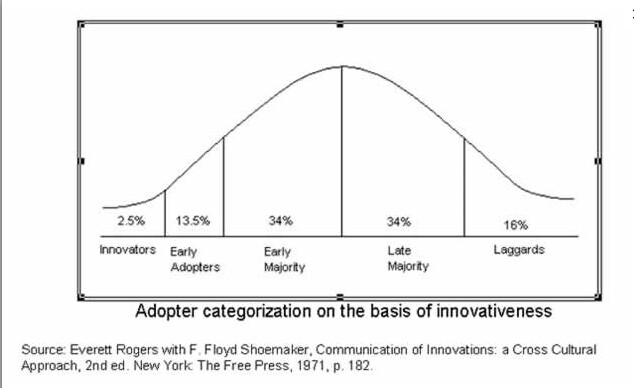 How news used to unfold. A big story in the middle… but lots of other data on both ends.

This shift comes because bad news sells and the internet rules because of its “rapid spread viral” abilities. 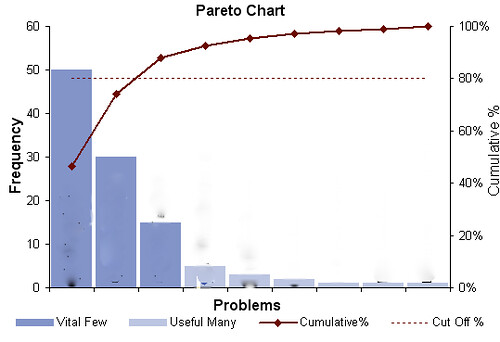 In a Pareto distribution 20% of the events dominate 80% of the news… and most of it is bad news.

Good global news… an important invention or scientific discovery, a well managed company’s success or some great social advancement gets lost in the sensationalism…. doom and gloom.  Fiscal cliffs… Y2Ks and the Mayan end of the world… all sensational… (and wrong). The bad stuff absorbs 80% the reader’s time.

Extreme events in the former Gaussian news world were late arriving.  Lack of timeliness relegated even the worst news to back pages.  100 years ago if there was a volcano in Indonesia… newspapers did not make it front page news because by the time the event was known, it had lost its immediacy.  “Huge volcano erupted last month” is not compelling front page news!

In the broadcast era… networks still had to send reporters and photographers to record a bad event.  Thus timeliness was limited and the uptake expensive. 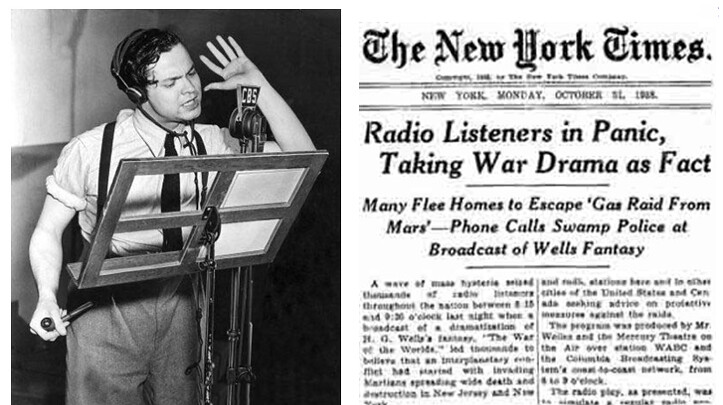 This shift began as early as October 30, 1938.  Orson Welles performed a radio play based on his story “War of the Worlds”.   Listeners believed the national broadcast.   This caused panic and mass hysteria.   Listeners thought Martians had landed in New Jersey and were taking over the world.

Broadcasters began to learn that of all the news… bad… the worst the better… attracted the most attention.

In mainstream media most of the news is now immediate and bad… natural disaster… mayhem… murder…scandals.

This has profound implications for mankind and creates three huge problems.

The first problem is within most of us.   Much of the human population who read the news, think events really are as bad as the news suggests.   This allows fear to dominate the entire thought process and lifestyle.

The world is mostly a good, safe, hospitable place.   Yes, there are some really bad things outside our door step.   There probably always was.  We are just more aware of the bad now as it is regularly burned into our consciousness.

We need to change our mindsets to adapt because success… happiness, harmony in health and wealth comes from positivity.

The second problem is that democratic institutions (not just businesses, but also educational, governmental, religious, medical, legal) are largely designed for a Gaussian world where averages and forecasts are meaningful.  As a result, society has evolved a sophisticated set of programs to service society that deliver significant efficiency based on average distributions.  Banks expect a regular number of people to withdraw funds in any one day.  Rescue units expect a regular number of moderate natural disasters.   Hospitals anticipate the percent of the population that will arrive for admittance. Courts expect a regular flow of dispute and crime, etc.

This is what happened in the past with… 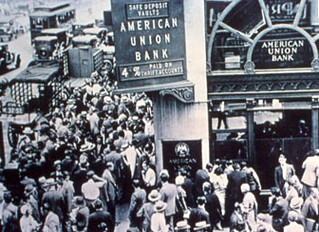 too many unexpected withdrawls. 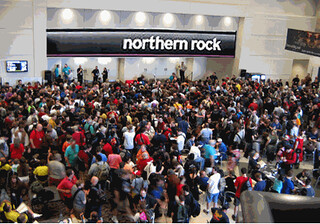 In a world where we see only sudden, severe and difficult to anticipate shifts, these social economic systems become much less viable.  We as society and individuals need to become a lot more creative in terms how to respond to crisis, especially because of the third problem.

The third problem is that in a democratic social economic model… leaders are elected.   They have to appear to be caring for their voters.    When all voters read is bad news… the leaders have to respond by distorting services so the service appears to be helping the severe problem… rather than really helping. This has created the art of SPIN.   Governments become appearance rather than action… form rather than function.

This gums the systems further and makes all systems less dependable… reliable and safe.

What to Do:  The Silver Lining

Remember… problems create opportunity.  Statistically the world is a positive, safe place.   The global population is growing.  There are huge changes yes.  There  are major distortions and plenty of problems… but for most of us… if we focus on what we can do… rather than bad news… we’re good.

Step One: Forget the big stuff.  There are few really big disasters.  Meteors crashing… huge volcanoes exploding, major tsunamis flooding , polar magnetic shifts and such stuff is popular with the doom and gloom promoters, but are unlikely.  We can’t anything about them.  Forget them. Take step two instead.


Step Two: Look within.  Security and affluence does not come from external events. Success comes from linking worldly affairs with the economic miracles we all possess within.  Really get in touch with your passion and purpose.  Turn the process of ordinary daily living into an exciting, profitable event as you learn to match inner resources to external economic events.

Step Three: Be a Contrarian.  Stay away from that 20% of everything that is attracting the 80% of all attention.  Being contrarian increases your likelihood of finding good value.   In a Patero world most markets are usually overbought or oversold.   They are also more susceptible to sudden collapse. A contrarian by nature finds markets that offer better value and consequently is also more secure.

Step Four: Get a handle on your food supply.  Should there be really bad news those with enough food and shelter will fare the best.  This is why we recommend multi dimensional living.  Live and earn in the existing economy… but also have some reliance on your own healthy food supply.

Step Five: Look for positive news.  This is why have joined with our webmaster and David and Sherry Johnson to provide Positive Community Magazines.

The final thought in this note is to realize that Man has always suffered the burden of adapting to change.  Change defies our logic because linear thought is composed of thinking based on events that have passed.   Adapting to an unknown future requires that we integrate our logic with our intuition. This can be enormously difficult, but an anonymous 14th century Samurai warrior gives us a clue how to do this. This Warrior’s Creed explains what to do better than I could, so I’d like to share it here with you.

Whether we are investors or business people, we are commercial warriors. Despite industrial eras, technology, innovation and all the miracles of our modern world, the true nature of life, commerce and business has not altered one bit.  Run your life and business and  invest with this wisdom, and you will not be able to fail.