Micro Business Success One Sip and Word at a Time

Micro business success comes one enjoyable step at a time when you do what you love.

This mantra of this site since it began… and well before in our former print newsletters has been “Turn Your Passion into Profit”.

Merri and I have always lived that way… following our hearts and figuring our how to serve and earn in this process.

Here are two great examples of how others are following this process and doing really well.   You can gain by reading this article from the Archdale & Trinity Magazine entitled “The Water of Life” by Sherry Johnson.

This article may be your “Doorway to Passion and Profit”. 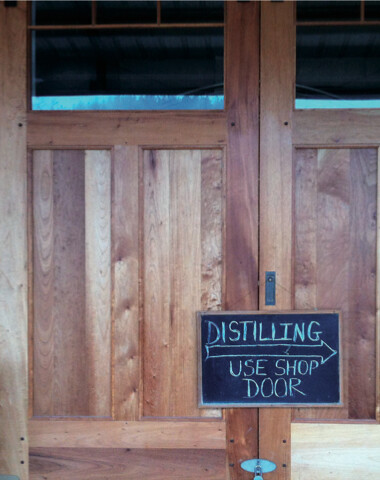 Photo from the Archdale & Trinity Magazine

Here is an example of enjoying and earning from a passion one sip at a time.

We recently attended the Big Sip Beverage expo in Greensboro, Which Was one of the best festivals we’ve ever been to.   They had all manner of Beverages represented, from beer & wine, tea & coffee, to locally made rum, vodka, moonshine and whisky.

These local companies are the ones we gravitated to because as you know, we love to support local, North Carolina products.

We discovered the Blue Ridge distilling company from golden valley, NC serving single-malt whisky. You actually can’t call it Scotch unless it is distilled and aged in Scotland, although it’s essentially the same thing.

I am not sure if it was their laid-back attitudes, their warm and inviting smiles or their generosity when it came to pouring samples of their single-malt whisky, or maybe it was all of the above, but we liked them immediately.

In chatting with two of the guys at the booth, Bob and Dan, we mentioned that we would like to do an article on the company. They generously invited us up to tour the distillery, have dinner and spend the night. They got busy serving their samples, and we wandered off to try other beverages at the event, weaving back and forth between the alcoholic and non-alcoholic variety, to keep our heads.

I sent an email right after Christmas, figuring it would take a while to coordinate schedules and get our weekend trip planned. Tim Ferris, the Founder of Blue Ridge Distilling Co. got back to me immediately and said to come on up any time. I confirmed that the offer of dinner and overnight accommodations were still a go, and we made plans to drive up on a Friday afternoon.

Golden Valley is nestled in the foothills of the Blue Ridge Mountains, just outside of Rutherfordton. It’s a beautiful area, full of rich history and 328 hearty souls call it home. There are some who believe that Abraham Lincoln was actually born there, not in Kentucky as is commonly accepted.

Tim has been diving for 12 years, and has worked all over  the world. In 2010, he started Defiant Marine, a deep sea diving, consulting and salvage company. He has assembled a team of top notch individuals who go above and beyond to get the job done.

They have been called in to help with many recent disasters, including refloating the Vega Sagittarius in the cold seas west of Nuuk, Greenland, and remediating the environmental threat when a chemical and oil tanker ran aground on the rocks of Santa Panagia, Italy due to bad weather.

They spend anywhere from a few days to several months on a job, because they don’t leave until it is completed to their satisfaction, and that of the company or country that hires them.

With such an exciting and oftentimes dangerous job, what would you do with yourself while you are waiting for the next adrenalin rush? Tim says that the minute they get back to shore and settle in at home, they are itching for something to do.

He has always had a fascination with distilling alcohol, and North Carolina has a long and exciting history of distilling, both legally and illegally.  The idea for distilling his own brand of alcohol was born.

Tim is not one to go off half-cocked. He always has a plan. Before he put the time and money into building the distillery, he wanted to make sure this was the right thing for him. He put out feelers and purchased his first small still locally, which sits proudly in the corner of the distillery today. After that first batch of whisky, the rest as they say, is history. Notice the spelling – he has taken the original spelling of whisky from the Scotch, dropping the Americanized “e”. The word whisky is from the Gaelic “uisce beatha” meaning “water of life.” 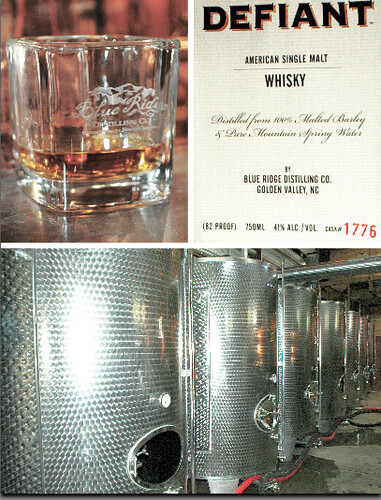 We arrived at the distillery at 6:00 pm and Tim was waiting to greet us and show us around. We toured the operation, making notes for the article, and learning about the process of turning water, malted barley and yeast into this amazing thing called whisky. Then came the best part – tasting the finished product. First, Tim poured me a glass of Macallan, which is considered one of the best single malt scotches in the world. I sipped gingerly. The bite in the back of my throat and the burn all the way down are the reasons I don’t like drinking whisky to begin with. Then, he poured a glass of his whisky, and as I sipped, I was surprised at the texture, and subtle flavors that teased my tongue as it slid smoothly down my throat. It was an eye opener, because I really did not think that I liked whisky, but I was clearly mistaken – I just haven’t had one this good before!

Tim named his whisky Defiant, not because it is the name of his company, Defiant Marine, but because, as he says, “The spirit of who we are is in every bottle.” 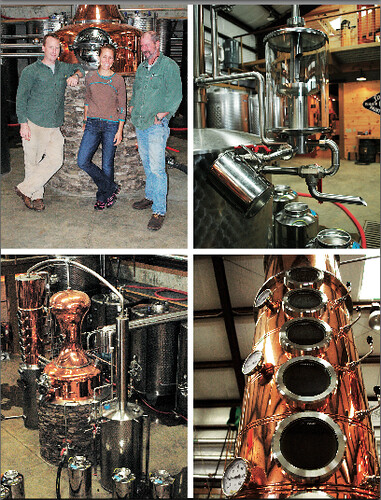 We finished up our tour, and Tim invited us to the house for dinner. Not knowing what to expect, we followed his four wheeler in our car, winding through the narrow dirt country roads farther up the hill, and almost lost sight of his lights a couple of times as he sped through the woods at breakneck speeds (clearly knowing where he was going!) One of his favorite things about his job is being able to drive a four-wheeler to work every day.

We were greeted by the most amazing aromas coming from the kitchen. Bob Weihe, one of the divers at Defiant Marine and obviously an amazing cook, placed plates of bread with three different cheeses on the table to whet our appetites, while he finished the prep for dinner. He had put together a chicken and sausage puttanesca over pasta, topped with fresh grated parmesan – it was a meal fit for kings.

Over dinner, the guys regaled us with stories of their exploits all over the world, from Egypt to Greenland, to their recent job in New York City pumping out the subway tubes, and the interesting adventures they’ve shared. Back at the distillery, there is an original subway sign hanging on the wall that was presented to them in thanks at the end of that successful job.

Tim’s sister, Missy, showed up at the end of dinner, to say hi. She lives in South Africa with her husband and two children, and is an investor in the Distillery from afar, until it grows big enough to be able to support her family here in the States.

It’s been a long day, and it’s time to head to bed. We assumed we’d be bunking at the house, but Tim had arranged through a neighbor to rent a cabin from Golden Valley Getaways for us to use while we were in town. He and Missy led the way to The Hawks Nest, about five miles from the distillery. As we drove up we got the sense of a lot of space, but since it was “country dark” it was hard to see anything at that hour. Suffice it to say there were no streetlights, and nothing but dark for miles around. After they let us in, showed us around and headed home, we poured two glasses of wine and sat down in front of the fireplace to relax and enjoy the rest of our evening. With the cheerfully crackling fire and wine mellowing us out, it wasn’t long before we were yawning and ready to call it a night. 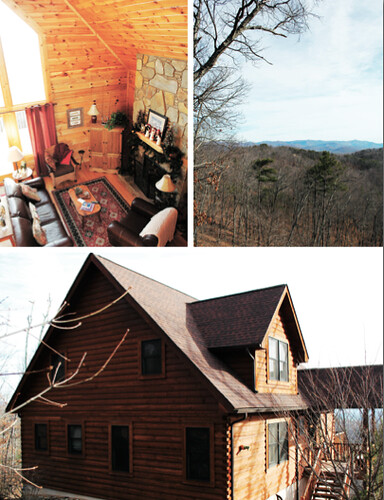 When I woke up the next morning the sun was streaming through the blinds. As I stepped into the living room, floor to ceiling windows greeted me, overlooking a panoramic view of the mountains in the distance. It was breathtaking! It was a little chilly, so I lit the fireplace, and enjoyed a quiet hour to myself reading a book and basking by the warmth of the fire. We were in no hurry and somewhat reluctant to head back home, we were enjoying our visit with Tim, Bob, and the rest so much.

Eventually, we got ready, packed our bag, and headed back down the hill.

When we got back to the distillery, Tim and Bob were already hard at work on the beams up in the office. There is always work to be done, so their hands are never idle. Whisky distilling is a lot of “hurry up and wait”, so in their downtime they are working on the building, as well as other projects, including repairing their dive equipment to be ready for the next job.

We sat around the workbench drinking freshly ground coffee, fine tuning the article, and discussing philosophy. For Dave and I it was great to spend time with like-minded people who believe passionately in what they do. Something Tim said stands out above all. When I asked him what his goal was for the distillery, he said

“To make the best single-malt whisky in the world.” It’s just that simple.

Monday through Friday from 9 to 5 pm to schedule your own visit and tour of the distillery. Defiant Whisky is now available in ABC stores throughout North Carolina, but you might have to ask them to order it – it just became available on December 12th and hasn’t made it onto all of the shelves yet.

The Second Example of Success “One Word at a Time” 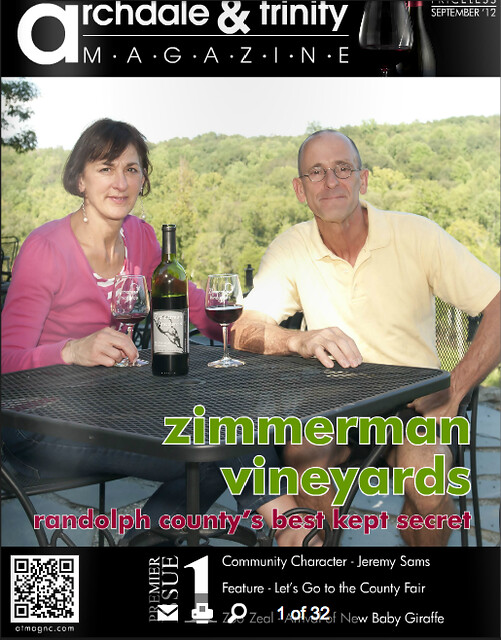 This second example of success is in micro publishing and can be seen in the second magazine launched by Dave & Sherry Johnson.

There are many micro publishing benefits beyond the wealth it generates.  The income from small Positive Community Magazines is wonderful… as much as $17,000 gross a month (with profits over $11,000)  but the other benefits are often more important.

A recent message at this site looked at 11 benefits of micro magazine publishing .

#1:  Freedom of setting your own hours.

#3: You have complete control over your earnings.

#4: The tax benefits are tremendous.

#5:  When you work hard, you are working hard for your benefit and wealth not someone else’s.

#6:  You get PRESS credentials.

#8: Service You Provide to the Community.

#9:  You  can give a voice to positive organizations that normally wouldn’t have one.

This example shows the benefits of PRESS credentials and tax benefits.   The Johnson’s PRESS credentials allowed them to meet interesting people.  learn new ideas and concepts…. share them with their community and enjoy a wonderful weekend that was a tax deductoble expense.

Life is short. Grab it. Go do things with a micro business one enjoyable step at a time.

Get a FREE Report on Micro Magazine Publishing.

Join Merri and me in Mt. Dora February 1-2-3 to learn about how to create a micro business in Smalltown USA, Canada, Ecuador or wherever you are.