Here is a demographic profit pyramid from the US Census Bureau.

The keys to economics can be spelled our as PROFIT:  People… Resources… Output… Free Trade… Innovation and Time

The study of demographics is the People in the Profit and can give us many clues.

Take for example the population pyramid of Ecuador.   This shows a young growing population… a good place to be. 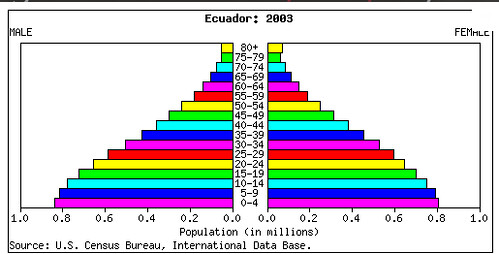 I included this pyramid here just to show an example of a good base though Ecuador does not have a stock market due to lack of Free Trade and Innovation.

The chart below, from the U.S. Census Bureau shows the U.S. population pyramid as of 2010 (the date the bureau works from at this time) and a prediction of the pyramid in 2020. 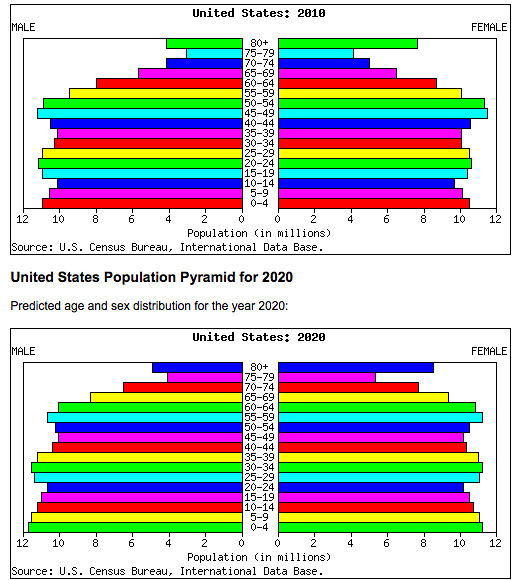 This pyramid shows a growing problem.

Since this chart if three years old we can throw some time into our calculations.  The group aged 60 to 64 (red) and older are now aged 63 to 67 at and are retiring or retired and already represent a sizable population.

There is still a fair base of the population at work who can support these retirees.

A much larger wave now aged 58 to 62 (yellow 55 to 59 in the chart) hit retirement age in five years.  This is when the problem really begins.

Then when those aged 53 to 57 (green) begin to retire in ten years, the problem REALLY starts to become severe and just gets worse and worse after that.

Too many retirees… not enough workers.

We would see similar patterns in Japan and Europe so a huge chunk of the industrialized world faces a serious demographic crunch.

There is one more bitter demographic onion hiccup in this economic stew.  A growing global population but with finite resources.  More People… less Resources.

How will humanity deal with this.   Humanity will deal with it and those who figure out how now can profit on the leading edge.

Sharpest knife in the world.

The leading edge can be sharp but we do not have to have the sharpest knife to slice through the demographic data to see what is happening.

#1: Many retirees are working longer.

#2: Everyone is becoming more productive.

#3: Many retirees are moving either to lower cost countries or to smaller towns.

Studies suggested that as many as 10% of retirees will move abroad. Another 10% are thinking of a part time international shift.

Many are moving to Ecuador now. In a few decades, as this pyramid projection shows… the social system in Ecuador will be more strained. 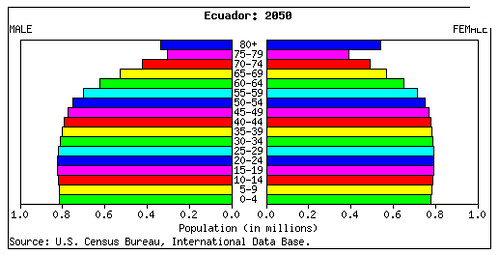 Wealth flowing in from retirees will help.

An article based on boomer quiz by the Retirement Ranger entitled “Surprising New Survey Finds Many Retirees Plan on Moving in Retirement” gives us a clue.

Here are excerpts (see a link to the entire article below):

5000 people took a Retirement Ranger Quiz and show that the vast majority of Ranger plan on moving in retirement.  Taxes, cost of living, and region are all important considerations for just about everybody taking the quiz.

Q: Will you move in retirement, and how far?

39% said they plan on moving out of state or out of the country. The most startling difference from other surveys is how few people taking the Retirement Ranger plan on staying where they are now – just 2%. The biggest category of responses on this category is the 46% who plan on moving out of their “current metro” – presumably not too far from where they live now, but a move from their current home at least. Presumably that means they intend to downsize and/or find a home in a more retirement friendly location or development – but not move too far away from where they live now.

Q:  What environment are you looking for?

The results to this question are refreshing – Topretirements visitors are looking for all kinds of experiences – from coastal to lakes to college towns to suburbia. Aside from a clear preference for a coastal environment, most other environments were fairly close together. College towns, small towns, and suburbia were slightly preferred over the mountains or an urban experience. Deserts and a rural environment brought up the rear in retirement interest.

This question gave some dimension to the previous question about the kind of town these prospective retirees want to live in. By far, most people are open minded on this question too – they do not have a strong preference on the size of town they want to retire to. Of those who do care, in general it seems the smaller the better – 0-25,000 population got the most interest, followed by towns 25,001-100,000, and bringing up the rear – cities of more than 100,000.

Q: Would you like to find a retirement destination with a lower than average tax burden?

The short answer is yes, but not nearly as emphatically as we might have thought. This was a yes or no question: 58% apparently could be induced to move by a low tax burden, while the remaining 42% have no strong preference.

Demographic evidence evidence such as this is one reason we have started a magazine business focused on communities of 30,000.

Learn more about this micro publishing opportunity, Order the FREE report here.  How to Earn With Positive Community News

Think about who will profit from growing demographics shifts of this nature as these will be good places to invest.

Learn about places to invest based around demographics at our next Super  Thinking + Investing and Business seminar.