Passion plays a part in longevity.

One of the pet pieces of advice we have shared with readers for decades is “Turn Your Passion into Profit”.

This is because when you do what you love… you do it better… with more energy AND  increase your chances of success.

Plus we may be able to do it longer… in hours and over years.

An excerpt from the report I am about to release clarifies this  fact and says:

We can see many examples of how passion for service, profit and fulfillment lead to success and longevity again and again.

We can see such a reflection of this fact in Warren Buffet and his partner Charlie Munger. 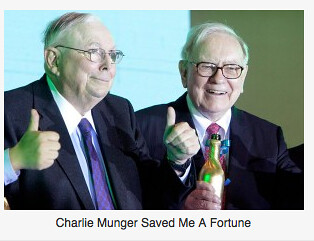 Charlie Munger turns 89 on January 1, 2013.  His younger business partner Warren Buffet is only 83.

Have you ever wonder how Munger and Buffet despite their billions are still at work… and why?

The December 12, 2012 New Yorker article entitled “Warren’s Way” by James Surowiecki can help us understand as it says:  Warren Buffett’s tastes haven’t changed much over the years. “I like today what I liked fifty years ago,” he told me the other day. “I like reading 10-Ks. I like playing bridge. I haven’t acquired a lot of new habits. I was happy when I was in my twenties, and I don’t see a reason to change things.” We were having lunch with Carol Loomis, one of his closest friends, who is the editor of “Tap Dancing to Work,” a new anthology of Fortune writings by and about Buffett. As if to illustrate his point, lunch was the same lunch he’s probably been eating since he was a kid: a hamburger and fries, followed by vanilla ice cream, ‘strong on the chocolate syrup’. It isn’t just his tastes, though: as the new book shows, Buffett’s philosophy of investing has stayed remarkably consistent.

Good nutrition is probably not Buffet’s secret!  Tap dancing to work might be.  When you do what you love… your activity is not work… it is a great reason to get up every day and be alive.

The article goes on to say:  Another crucial aspect of Buffett’s public appeal is his unnervingly even persona. He’s not placid—at eighty-two, he’s a garrulous bundle of energy, his conversation punctuated by little bursts of laughter—but he projects an aura of profound cool.

There you have it. 83 years old… still working and still happy.   What is the key?

One facet of Buffet’s beyond business success is that he is true to himself.

The article explains this and says: The way Buffett runs his company, Berkshire Hathaway, which owns more than eighty other companies outright, is similarly out of tune with the times. In the current stereotype of corporate acquirers, firms like Bain Capital load companies with debt, downsize their workforces, and strip them of assets. Buffett doesn’t do hostile acquisitions or major restructurings, and he almost never sells the companies he buys. He admits that this isn’t purely rational, although Berkshire is very profitable. But it plays to his strengths (he likes buying companies and building them) and mitigates his weaknesses (as he told me, he hates confrontation). “You’ve got to create the structures consistent with what your temperament needs to be,” he said. Whatever the personal reasons for his approach, it’s one that seems reassuring.

I am happy to announce that Merri and I have found ourselves in the same business as Buffet… community publishing.

With Warren Buffet’s philosophies in mind we have created a report that looks at how to earn $142,020 a year with a small community publishing system.

I’ll be releasing this report shortly and you can receive it free.

If you would like to receive a free copy of this report “How to Earn with Community News” simply…. click here.

Learn how to earn with writing and publishing.

← Good News for Your Community Magic in Magnesium →