Why put your savings and investments in a country where investment managers are fixated on a currency that has fallen for almost 40 years?

One Easter about 20 years ago, our newsletter coined the phrase Multi Currency Sandwich. 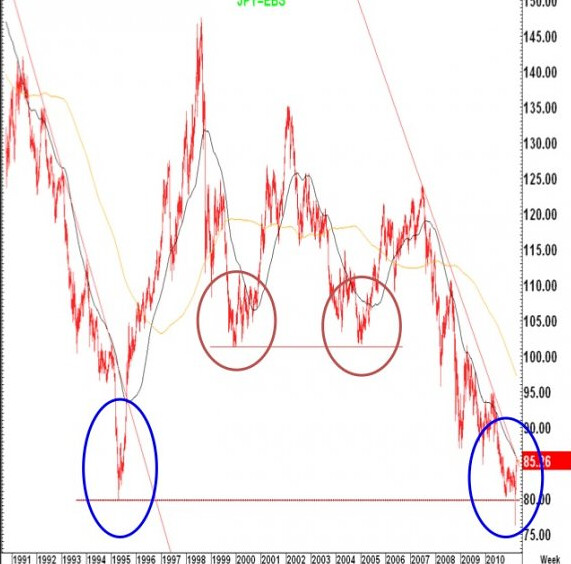 The Japanese yen versus the US dollar ranging from 145 yen to 79 yen per dollar.

I remember the day well because on the Easter Sunday we had invited one of our Austrian bankers and his family for an Easter breakfast.  This was also the day that daylight savings changed.  Merri and I awoke and remembered “Fall Back – Spring Forward”.  However  for some reason we fell back… when forward we should have sprang!

Thinking we had an extra hour instead of one less we were still in our pajamas when the banker and his family… all dressed in their Sunday best, knocked on our front door.

I also recall a comment I made that day to the banker.  I told him that we were gong to advise our readers to borrow Japanese yen… and invest the loan in Mexican pesos.  The yen had risen in value versus the US dollar from the 140 yen to the dollar range to 111 yen per US dollar.   The yen interest rate was somewhere around 4% and Mexican peso bonds were paying at 12%.

I told him… this will be the most powerful investment advice I have given… ever.

How true that was! 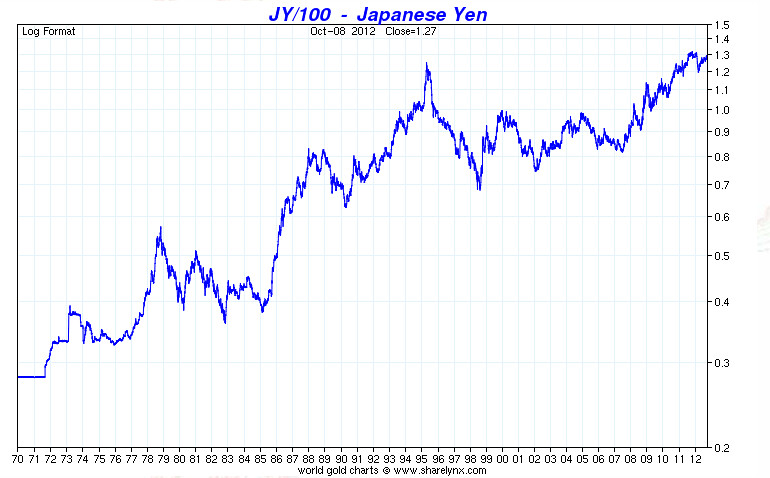 The yen immediately strengthened more and rose all the way to 79 yen per dollar.  That scared the heck out of many. Those who bailed lost… in some cases a lot!

My belief was that the yen was over valued even at 111.  My studies suggested that 120 was the correct parity.  This was a yen bubble. Every day that the yen was higher than 120 per dollar was an investing opportunity.

When the bubble burst, the yen fell clear back to 145 yen per dollar.   Readers  who had held on… as I did… made a huge profit.

Yen leverage has remained a wonderful overall long term strategy for 20 years.  Yen interest rates have normally been near or under 3% for 20 years!  Any  loan that was invested for more than 3% enjoyed pure extra profit!

Now the yen is too strong again (in my humble opinion).   Plus as you see below yen interest rates now are as low as 2%.

If I am correct, this is a good time to short the Japanese yen.

There are two easy ways to make this short yen speculation… one is through ETFs.

The way to short the yen is to borrow yen and use the loan to make investments that earn more than 3% in currencies that are likely to rise against the yen.

The recent post at this site on Leveraged Asset Allocation shows how Jyske Bank’s JGAM is leveraging asset allocation portfolios with US dollar and euro loans.  This type of leverage is called hedged leverage because it has no forex risk.   Dollars and euro are borrowed at low interest rates and invested in higher yielding dollar and euro investments.  The added profit comes only from the difference between the loan costs and the yield or capital increase of the investment.

Here are the current invest loan interest rates from Jyske. 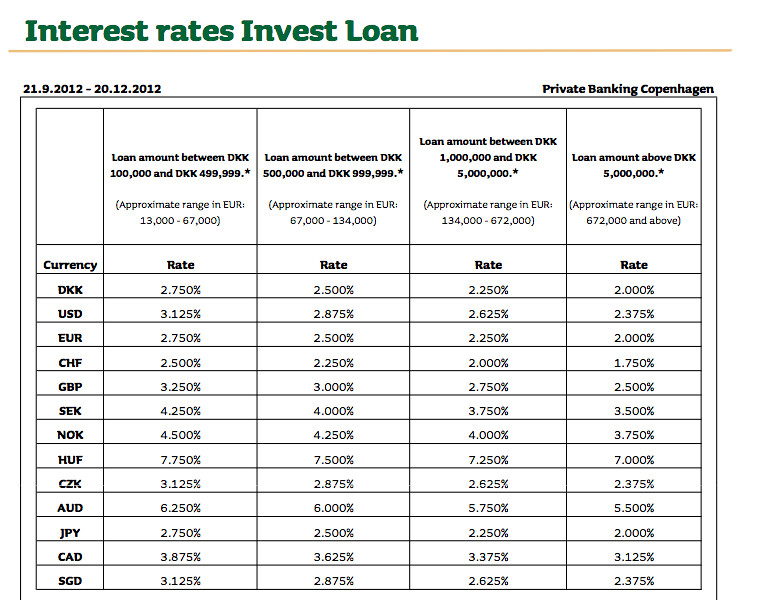 The figures above are used for illustration purposes only. These are not recommendations as a portfolio would be far more diversified.

Now let’s look at the same example but with borrowed yen.  The yen loan creates potential forex profit… or loss.

Currently one dollar equals about 82 yen.

Assume the same multi currency sandwich was created… but with $650,000 worth of borrowed yen instead of loans in dollars and euro.

However the forex potential is what becomes interesting. At 82 yen per dollar this requires a 53.3 million yen.

Assume that the yen returns to the purchasing power trend of 117 as shown in the chart below. 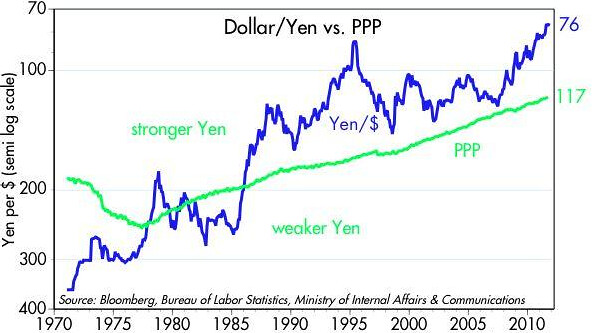 Chart from Bloomberg.com shows the yen at 117

That is the upside.  For a loss of the same magnitude the yen would have to rise from 82 yen per dollar to 53 yen per dollar… a highly unlikely event.

If this could be of value to you… be sure to review this with an investment adviser to look at a broader diversification of bonds plus the forex risks… the bond risks as well as the forex and bond purchase and management costs to make sure that such a speculation would work for you.

American investors can get more details and answers from Thomas Fischer at fischer@jgam.com

Non US investors can get details from René Mathys at mathys@jbpb.dk

JGAM has two types of clients… managed and advisory.  Normally the minimum for US clients managed clients is $200,000 and advisory one million dollars.

With leverage the managed minimum drops to $100,000 with one time leverage and $70,000 with two times leverage.

Canadian and other non US investors have a slightly higher minimum but much greater flexibility and freedom.

JGAM makes all decisions including composition of the loan with managed accounts.  Right now managed accounts have dollars and euro loans as shown in the Leveraged Asset Allocation posting of two days ago.

Advisory clients can choose the funding currency together with their Relationship Manager. The minimum for an Advisory is  1 million unleveraged or $500,000 with one time leverage (medium risk profile) and $350,000 with two times leverage (high risk profile).

Betting Against the Yen for Even Smaller Amounts.

Lou wrote:  I am watching a very nice cup and handle pattern forming on the Japanese Yen.  Aside from Forex, the easiest way to take advantage of the dollar strengthening against the Yen would be to look at  the ETF :  YCS .  Ultra short Japanese yen.

Get more details on this ETF from Lou Shinaman at lshinaman@ruggiewealth.com

One way for those who cannot open a  JGAM account to get the high bond income and forex potential, but not the positive carry is to buy the bonds from a US broker and buy the short yen ETF.

You can get details for buying the Danske and Santos bonds from Mike McDonald at Aegeon.  Michael McDonald at mmcdonald@aegiscap.com

Multi currency investing offers five enhanced benefits… asset protection…. greater privacy… broader diversification… forex potential and positive carry potential.    Since modern technology makes it as easy to bank in Europe and Asia as next door… these benefits are available to most investors if they learn how to Borrow Low and Invest High.

Save $79. Enroll in the seminar before Christmas and I’ll send our report Borrow Low-Deposit High Free. See details below.