A way to overcome never ending risk  is to have your own micro business that creates income wherever you live.

Merri and I have loved this… being able to go where we love and earn.  We have lived in Hong Kong…. Mexico…. The Dominican Republic…. England… Ecuador…. as well as Florida and in the remote Blue Ridge…. plus worked in almost 70 countries… being paid to enjoy and share these varied cultures.

There are three special reasons to have such a business.   The first special reason is the most important for you… a way to accomplish your mission in life.  See the message “more on missions” to understand the value of having a purpose driven business.
The second reason to have your own business is for permanent financial stability.

Many people rely or are planning to rely on pensions, Social Security or fixed income to maintain their finances.  This, as the chart below shows, may be a mistake.

Many American pensions are underfunded and at risk.   The only fall back is the Pension Benefit Guaranty Corporation a quasi government agency… that like the US Post Office is purportedly a self-financing organization.

Also like the Post Office it is financially unstable.  According to the PBGC’s 2011 financial report it is $26 billion in the hole.

Defined-benefit pension plans are very difficult to finance successfully:  General Motors, for example after the bankruptcy, still had unfunded pension liabilities of $25 billion at the end of 2011.

Many pension plans have liabilities that greatly exceed their assets and that are far beyond the  PBGC ability to guarantee.  Plus the PBGC guaranteed benefits are often much lower than the benefits offered by many pensions. 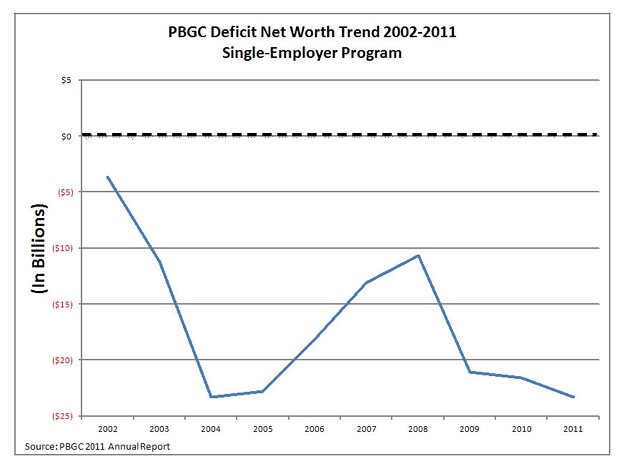 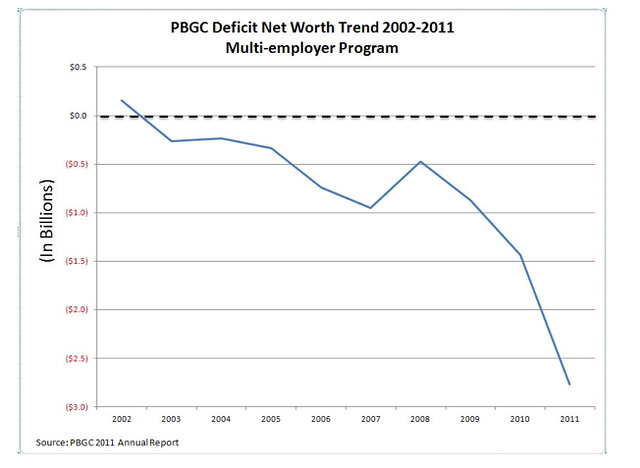 The Aon Hewitt Pension Risk tracker graphs above and below show how pensions ran into trouble during the last recession and have not recovered.

Even if the PBGC could meet all its obligations, most pensioners lose under the guarantee.   The maximum PBGC benefit for retirees aged 65  is $55,840.92.   The formula is complicated and the younger a person the greater the loss.

Take American Airline workers as an example.  PBGC benefits can be affected by three different caps: the maximum-benefit cap, based on the plan’s termination date; an age-at-retirement cap; and, for those who retired years before the plan terminated, an age-at-termination cap.

That means American Airlines workers would have been affected by the limits in effect in November 2011 so they do not receive the 2012 maximum but the 2011 maximum benefit of $54,000 annually ($4,500 per month).

These benefits work on a sliding scale dropping with age at retirement.  A worker retired at 59 receives far less than one at age 65… about  $2,800.

In addition to these losses, coverage is only for pensions that cover all employees. Extra  plans for highly paid employees are not insured.

Pilots take the worst loss because they normally have to retire at an early age.  American Airline pilots may see benefits reduced from $75,000 a year to about $25,000, partly because the mandatory retirement age was 60.

Pilots from other airlines have suffered similar fates. For example some United Airline pilots who retired at age 60 had $7,000 a month pension benefits, reduced to $2,300.

Canadians Pensions Have Risk as Well.

The conclusion of the survey was : “Pessimism persists on the Canadian DB pension landscape. As funded status continues to decline and corporate balance sheets reflect the impact, pension costs remain at the forefront of employer concerns.   While sponsors of CAPs have not traditionally been concerned about investment strategy, they are becoming increasingly concerned about their plan’s ability to provide adequate income for plan members. In fact, over 70% of survey respondents believe that CAP-related litigation will increase in the coming years and many have cited inadequate retiree income as a key factor. Whether DB or CAP.  The 2012 pension risk survey has highlighted the fact that another year of volatile market performance has left many plan sponsors struggling to meet obligations and manage risk.

The fact that one can even ask this question must give us reason for pause… but for the time being… yes even if there is another government shutdown Social Security checks will probably keep flowing.

During the last major month long shutdown in 1995, Social Security payments were mailed.   There is a strong legal precedent that the Social Security Administration has the authority to do so again because benefits are paid out of the trust fund.

However during the 1995 shutdown new Social Security claims were not processed because the agency furloughed 61,415 employees.

Beyond these dollar losses the bigger risk to pension, Social Security and Fixed Income payments is loss of purchasing power. Even those who see their full pension promises filled… will have less purchasing power with the funds they receive.

Trapped in a Strange Place

Seeing your income being badly reduced is terrible… but if this happens in a strange place it is even worse!

I have been broke in strange places three times and can assure you this is not pleasant.  Don’t do it!   My first experience in 1971, was in Singapore when the US dollar was devalued. For a short time I had only a pocket full of US dollars which no one would accept.  This was temporary… but I carry the emotions created by that fear to this day.

The second time I was trapped without income was serious.  My international business career began in the late 1960s at age of 21.  I joined a hot new international mutual fund company running their Asian office from Hong Kong.  Being one of the first to join I was given a generous stock option and watched it make me a paper millionaire at age 24. (And a million dollars was worth a lot in the 70s!)

Then Wall Street sank, the offshore mutual fund industry exploded and just as I turned 25, I was broke.  The shares in my stock option were worthless paper.

I lived on Bowen Road, in the mid-levels of Hong Kong but could not pay my rent. 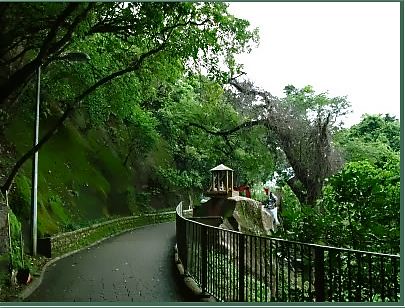 I was really broke… even wondering how to buy food and there was no airplane ticket nor money to leave so I was stranded 6,000 miles from home.

One day, getting ready for work I realized how really broke I was.  Normally the two mile drive into Central was cut short by a brief ride on the peak tram from the now defunct Bowen Road stop.

This ride cost then HK.25 cents… about  US$ .04 cents.  I did not have that Hong Kong quarter. I recall fishing though all the pockets in my clothes and could not find a cent!  Flat broke.

I had the true luxury of poverty which meant… get to work.  I began selling real estate in Fiji as a stop gap income producer.

This and why is all explained  in my course International Business Made EZ.

Yet at that moment… I did not feel particularly clever.  The thought was more like…. never again!

Hong Kong was not a place where a young American got a job with a salary.  Nor was Hong Kong a welfare state…  not even food stamps.  No welfare… no support mechanism at all.  I had to start my own micro business to survive.

The third time I was stranded without funds was in Ecuador.    All the banks shut down.  The country ran out of gas. Merri and I were living deep in the Andes and though we had plenty of money… overseas… we only had a couple of dollars in my pocket.   This was not really serious… but was a reminder… to share with you… “Don’t get caught in a strange place without a way to earn”.

Those painful times are worth recalling because in our International Business Made EZ seminars we find that the hardest part for many people whp want a micro business is getting started.

Everyone should improve their lifestyles… all the time.  Add adventure. Increase income.  Do something worthwhile that makes you feel good.  Start your own micro business.  The idea behind your business can be traditional, crazy, fun or even funky as is shown in our Funky Business Hall of Fame.

Life is a series of never ending risk… each and every day, but there is a growing risk of relying on unreasonable promises from the past.   Promises from pensions, Social Security and fixed income.   Have a way to earn extra income wherever you are.   Consider having your own micro business now.

Learn how to earn extra income at our Saturday, Sunday and Monday, December 1-2-3, 2012 Writer’s Camp.

← Different Strokes - Different Profits How to Have Everlasting Wealth →