Live where you love but invest where it is best for you.  The two places are not always the same so always take a more global view.  Look for investing alternatives with value everywhere.

One of the huge tensions that creates so much stress today is that political evolution has not kept pace with commercial gains.  Many people still think of themselves as a member of one tribe or another. “I am American or I am Chinese or I am Iranian,”   They separate themselves emotionally from other human beings in this guise… yet marry them in the market place.  This is one reason why the political drama has become so.  Prime Ministers, presidents, parliamentarians, politicians and candidates of all sorts spend all their time bashing opponents instead of outlining some semblance of a a policy or plan that will guide their nations.

This is because events of all national leaders is beyond their control.   This has always been the case… leaders cannot control all those within their jurisdiction. They have even less influence with those outside their borders.  Due to technology and the logic of global economics… those living outside another nation’s borders have far more impact than ever before.

Winston Churchill acknowledged this thought when he said, “If the Almighty were to rebuild the world and asked me for advice, I would have English Channels round every country. And the atmosphere would be such that anything which attempted to fly would be set on fire.”

Pandora has well and truly opened that box so there we have it… a global economy running a tribal political world.

We cannot change this fact, but we can adapt. We can use the technology to live where we love but invest and earn where it is best for us.

For example, a reader wrote:  Hello Gary…I am coming to Ecuador soon, hopefully with my husband.  I wonder if you can give me a recommendation for a bank or banks in Ecuador to use.  Have you been wiring funds back and forth and can you give any pointer on how best to do that? What to watch out for?

Our advice is to not put more than you need in an Ecuador bank.

I replied:  We used Banco Pichincha but mainly just live off ATM from a US account and or wire in larger amounts to buy real estate only as it is needed.

If you deposit large amounts ($50,000 or more) be sure to clear in advance with the receiving Ecuador bank so they are satisfied that these funds come from a legitimate source.  I had a couple hundred thousand frozen and almost lost a real estate deal because a bank froze funds even though my Danish bankers emailed the fact that the funds were from our pension account.  The Ecuador bank did not accept that explanation.  Only a threatened law suit by our attorney released the funds.   Regards,

Why invest in Ecuador when global stock markets make great sense now?  There are several reasons why this may be a time to start a huge run of profits.

One reason is that statistically…. equity markets are now selling at a good value.  Michale Keppler wrote in his latest quarterly equity value analysis: 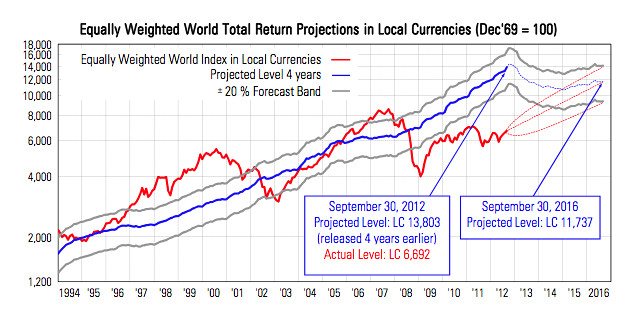 Last quarter, I laid out the reasons for our optimistic outlook in detail based on the development of earnings, cash flows, dividends and book values, which had grown by 8.3, 8.1, 8.8 and 9.1 percent, respectively, compounded annually from the turn of the century through June 30, 2012.

I also pointed out that the trend of shrinking multiples in connection with negative real interest rates for many bonds should have exhausted itself and will very likely run out of steam over the coming years. A turnaround in the valuation levels may come sooner rather than later. There is a good chance that it is happening already.

For the forecasts to be accurate we assume that each of the 18 markets included in our equally weighted World Index – these are those developed markets which have been a constituent of the MSCI World Index since its inception in December 1969 – will reach its respective expected value over the coming three to five years.

This assumption has proved to be accurate on average over long periods in the past. Like all value concepts, the warnings tend to come early as do the signs of optimism in times of severe undervaluation – like those we experience currently.

Interestingly, the former Fed Governor Alan Greenspan first warned of “Irrational Exuberance” on December 5, 1996, when the upper valuation band in our chart was first breached on the upside – even though the global bull market in equities continued another three years before the bubble burst. When Warren Buffett mentioned that stocks should “produce long-term returns far superior to bonds” in his famous article “You Pay a Very High Price in the Stock Market for a Cheery Consensus” in the Forbes issue of August 6, 1979, it took exactly three years to August 13, 1982 for one of the biggest global bull markets in stock market history to get started.

We prefer being early to being sorry.  Michael Keppler

Keppler’s analysis and thinking are in line with our study of long term equity market waves.

A chart of the Dow Jones Industrial we reviewed at our last Super Thinking + Investing & Business seminar looked at how after the 16 year 1966 to 1982 bear market ended… despite a recession just ending in the US (and lasting in most of the world till 1985) the Dow started a steady climb for 17 years. 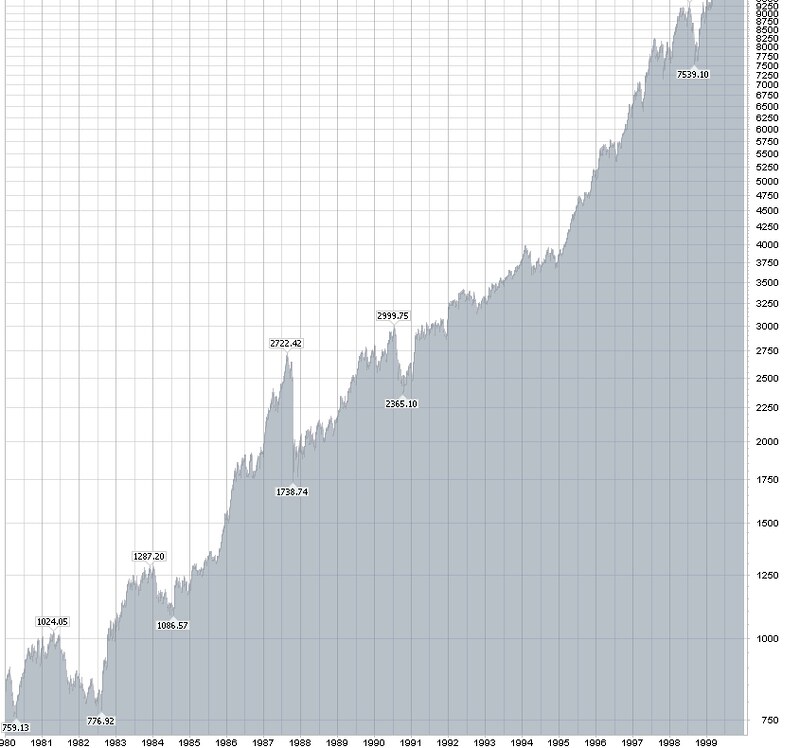 This time from 1982 to 1990 was the darkest hour… when the herd was thinking negatively but the reality was that a boom was on!   I recall how the book “Bankruptcy 1995: The Coming Collapse of America and How to Stop It” by Harry E. Figgie, Jr., with Gerald J. Swanson became a New York Times best seller in the early 1990s.  Most investors had still not caught on to the fact that fortunes were being made (as the chart above shows).

Then in 1999 another bear market began and history suggests that the end of this bear is near.

We can be like the smart investors who began investing in 1982 while everyone else cried in their beer or not.

I have been increasing my equity portfolio for almost a year now and plan to continue doing so.

By all means live in and enjoy Ecuador…. just do not do all your banking and investing there!

We leave most of our funds with our investment manager Jyske Global Asset Manager (JGAM) in Denmark and when we need liquidity wire it from there.

You can learn more from JGAM Senior VP Thomas Fischer at fischer@jgam.com

The sun always shines somewhere and provides many places we might love to live.  There is also always opportunity somewhere.  Modern technology allows us the ability to live where we love but protect our savings, investments and pensions in places where profits are most likely.

Update what’s happening with investments globally and see where to invest next at our February 1-2-3, 2013