Having a business in water offers value and makes sense… plus can really help the world. 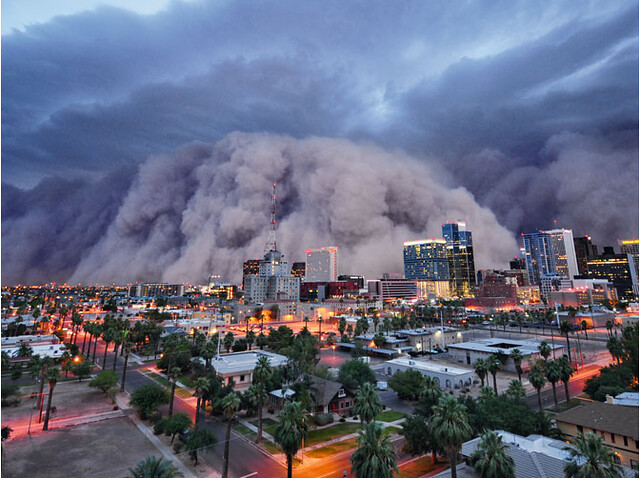 This photo by Daniel Bryant in the September 2012 National Geographic article “What’s Up With the Weather?” by Peter Miller shows the biggest dust storm in living memory rolling into Phoenix on July 5, 2011.

Yet the same article also shows pictures like this of… 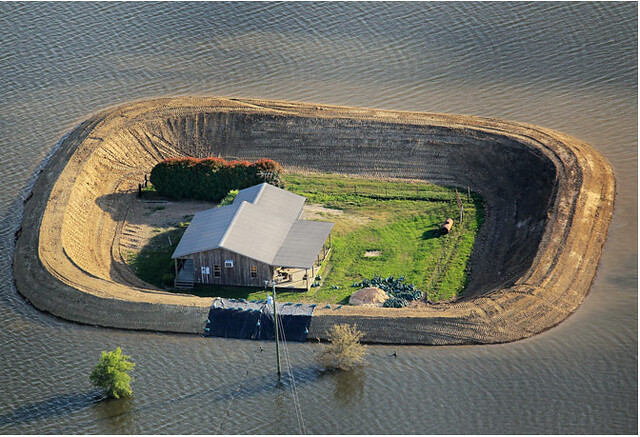 terrible floods on the Mississippi.

This article says:  There’s been a change in the weather.   Extreme events like the Nashville flood—described by officials as a once-in-a-millennium occurrence—are happening more frequently than they used to. A month before Nashville, torrential downpours dumped 11 inches of rain on Rio de Janeiro in 24 hours, triggering mud slides that buried hundreds. About three months after Nashville, record rains in Pakistan caused flooding that affected more than 20 million people. In late 2011 floods in Thailand submerged hundreds of factories near Bangkok, creating a worldwide shortage of computer hard drives.

And it’s not just heavy rains that are making headlines. During the past decade we’ve also seen severe droughts in places like Texas, Australia, and Russia, as well as in East Africa, where tens of thousands have taken refuge in camps. Deadly heat waves have hit Europe, and record numbers of tornadoes have ripped across the United States. Losses from such events helped push the cost of weather disasters in 2011 to an estimated $150 billion worldwide, a roughly 25 percent jump from the previous year. In the U.S. last year a record 14 events caused a billion dollars or more of damage each, far exceeding the previous record of nine such disasters in 2008.

What’s going on? Are these extreme events signals of a dangerous, human-made shift in Earth’s climate? Or are we just going through a natural stretch of bad luck?

The short answer is: probably both. The primary forces driving recent disasters have been natural climate cycles, especially El Niño and La Niña. Scientists have learned a lot during the past few decades about how that strange seesaw in the equatorial Pacific affects weather worldwide. During an El Niño a giant pool of warm water that normally sits in the central Pacific surges east all the way to South America; during a La Niña it shrinks and retreats into the western Pacific. Heat and water vapor coming off the warm pool generate thunderstorms so powerful and towering that their influence extends out of the tropics to the jet streams that blow across the middle latitudes. As the warm pool shifts back and forth along the Equator, the wavy paths of the jet streams shift north and south—which changes the tracks that storms follow across the continents. An El Niño tends to push drenching storms over the southern U.S. and Peru while visiting drought and fire on Australia. In a La Niña the rains flood Australia and fail in the American Southwest and Texas—and in even more distant places like East Africa.

But natural cycles can’t by themselves explain the recent streak of record-breaking disasters. Something else is happening too: The Earth is steadily getting warmer, with significantly more moisture in the atmosphere. Decades of observations from the summit of Mauna Loa in Hawaii, as well as from thousands of other weather stations, satellites, ships, buoys, deep-ocean probes, and balloons, show that a long-term buildup of greenhouse gases in the atmosphere is trapping heat and warming up the land, oceans, and atmosphere. Although some places, notably the Arctic, are warming faster than others, the average surface temperature worldwide has risen nearly one degree Fahrenheit in the past four decades. In 2010 it reached 58.12°F, tying the record set in 2005.

As moisture in the atmosphere has increased, rainfall has intensified. The amount of rain falling in intense downpours—the heaviest one percent of rain events—has increased by nearly 20 percent during the past century in the U.S. “You’re getting more rain from a given storm now than you would have 30 or 40 years ago,” says Gerald Meehl, a senior scientist at the National Center for Atmospheric Research in Boulder, Colorado. Global warming, he says, has changed the odds for extreme weather.

“Picture a baseball player on steroids,” Meehl goes on. “This baseball player steps up to the plate and hits a home run. It’s impossible to say if he hit that home run because of the steroids, or whether he would have hit it anyway. The drugs just made it more likely.”

It’s the same with the weather, Meehl says. Greenhouse gases are the steroids of the climate system. “By adding just a little bit more carbon dioxide to the climate, it makes things a little bit warmer and shifts the odds toward these more extreme events,” he says. “What was once a rare event will become less rare.”

Fortified by a levee, a house near Vicksburg survives a Yazoo River flood in May 2011. Snowmelt and intense rains—eight times as much rainfall as usual in parts of the Mississippi River watershed—triggered floods that caused three to four billion dollars in damages.

This site has reviewed many benefits of the nano technology that is used in the Purely Green and Bio Wash bio degradable cleaners and fertilizer booster.

We have used this ourselves in so many ways for more than a decade… brushing our teeth, in the bath, cleaning the dishes, all household and farm equipment degreasing and cleaning, cleaning, to kill the Wooly Adelgid blight on our hemlocks in North Carolina and to boost production of our orange grove.

Then last winter we were able to tell how Bio Wash also helps plants absorb moisture.  We wrote:

Now it appears that Bio Wash may help with droughts as well.

Ted sent this note: These photos from a Texas farmer show his granddaughter in… 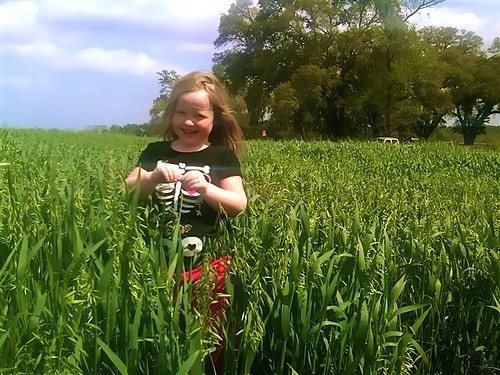 the oat field that prospered during a serious drought. 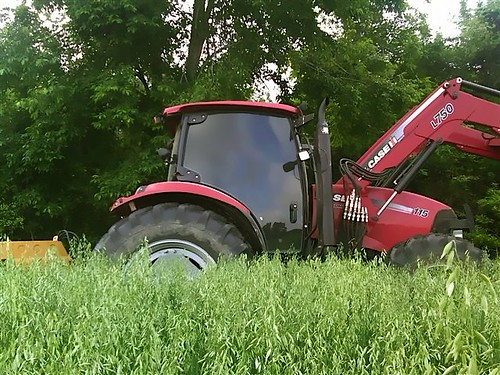 During the present drought in Texas, his BioWashed oats survived and prospered in abundance.

The farmer advised that at harvest time, his oats were chest high on his 6’2″ frame.

With the onset of even more serious drought conditions across North America I am posting this note from Ted Tidwell as a community service.

Farmers across America are threatened with disaster unless quick action is taken. Crops are dying. Entire incomes are in jeopardy. Food prices could soar.

Prior experience indicates that BioWash may offer the solution to the crisis.  Read On!

During the worst drought Texas ever experienced …… Cattle Rancher Alton Holt BioWashed his 90 acre oat crop. While all neighboring growers were losing their oats, Alton enjoyed his highest oat yield ever experienced on that acreage AND increased his oat protein content by 8 to 10 percentage points.

What was the difference between Alton’s crop success and his neighbors’ crop failure?  BioWash!!

Alton sprayed his oats with BioWash 100, diluted at the rate of five (5) ounces BioWash per 30 gallons of water, per acre.  After spraying he went traveling for several months. Upon his return, he was amazed.

We cannot guarantee that all drought-stricken crops can be saved by BioWash or that all farmers will enjoy Alton Holt’s phenomenal results.  However, at an investment of less than $6 per acre, how can you pass up the opportunity?

Take an opportunity to review Alton Holt’s pictures and the oat protein results after applying BioWash.  BioWash may help your crops survive this current, unprecendented drought.

THE PROOF IS IN THE OATS!

Without BioWash, the oat fields adjacent to Alton Hope’s BioWashed field were completely unproductive. The fields were opened to browsing by cattle because there were insufficient oats to harvest.

After BioWashing, Alton Holt’s 90 acres produced the largest oat crop yield ever. The oats also reflected the highest protein content Holt had ever experienced. All this DESPITE the severe Texas drought conditions in 2011.

Visit www.fertilizerboosters.com for more information.
OAT PROTEIN INCREASED – DESPITE DROUGHT CONDITIONS!
The average normal crude protein range for oats is between 13.70% and 23.82%.

Alton Holt reported that his oats in the past have contained about 16% protein.  After BioWashing his 90 acres, lab analysis reflected Alton’s oats to contain upwards of 24% protein!

Iowa farmer Bob Treloar concluded that one of the best defenses against drought is the BioWash success in creating larger, stronger root systems.

For increased yields and higher profits, even during drought conditions, try BioWash today!  You can order BioWash from our website at www.fertilizerboosters.com or call us at 239-283-1222 (M-F from 9:00-5:00).

There are three ways to solve most “shortage of commodity” problems… Find new supply… reduce demand… or find new technologies that reduce demand.  Bio Wash is a technology that can help reduce the demand for water.

Learn how to earn as a distributor of Bio Wash at our Super Thinking + International Business and Investing Seminar in Montreal.

What’s Up With the Weather?”