We as individuals should invest and create lifestyles that are fulfilling, profitable and in tune with reality.  We need to continually spot new changes and trends and not be caught in a quagmire of old thought. 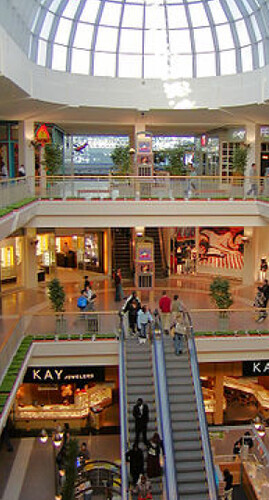 Spotting trends has led to a $200 million renovation in the Mall of America.

A September 17, 2012 Times article “Ritzy Retail” by Christopher Matthews gives us a clue about trends ahead.  Here is an excerpt:  But take a closer look and you’ll see that the evolution of this American institution is really a tale of two malls. Cedrik Lachance, a retail analyst at Green Street Advisors, says owners of high-end malls–ones anchored by stores like Bloomingdale’s and Nordstrom and catering to households earning more than $100,000 per year–have actually done very well recently. When it comes to upscale malls, he says, “if you look back from 2007 and you fast-forward to today, you would never know that there was a recession in between.”

So why have luxe malls done well while many others have struggled to find tenants? According to Ryan Severino, a Reis analyst, it reflects which shoppers have been hit hardest. Malls for middle- and low-income customers are struggling not because consumers don’t want to shop there but because they can’t afford to.

“There’s been a hollowing out of retail in the middle because in this recession, upscale consumers really haven’t had to cut back,” he says. Retailers like Kohl’s and Gap, whose bread and butter is middle-income shoppers in the U.S., have suffered as these consumers have been forced to trade down to discount retailers like Walmart and even dollar stores. In other words, the American mall is moving ahead–but leaving many consumers behind.

The photos from the Print edition of Time show where we might look for places to invest now. 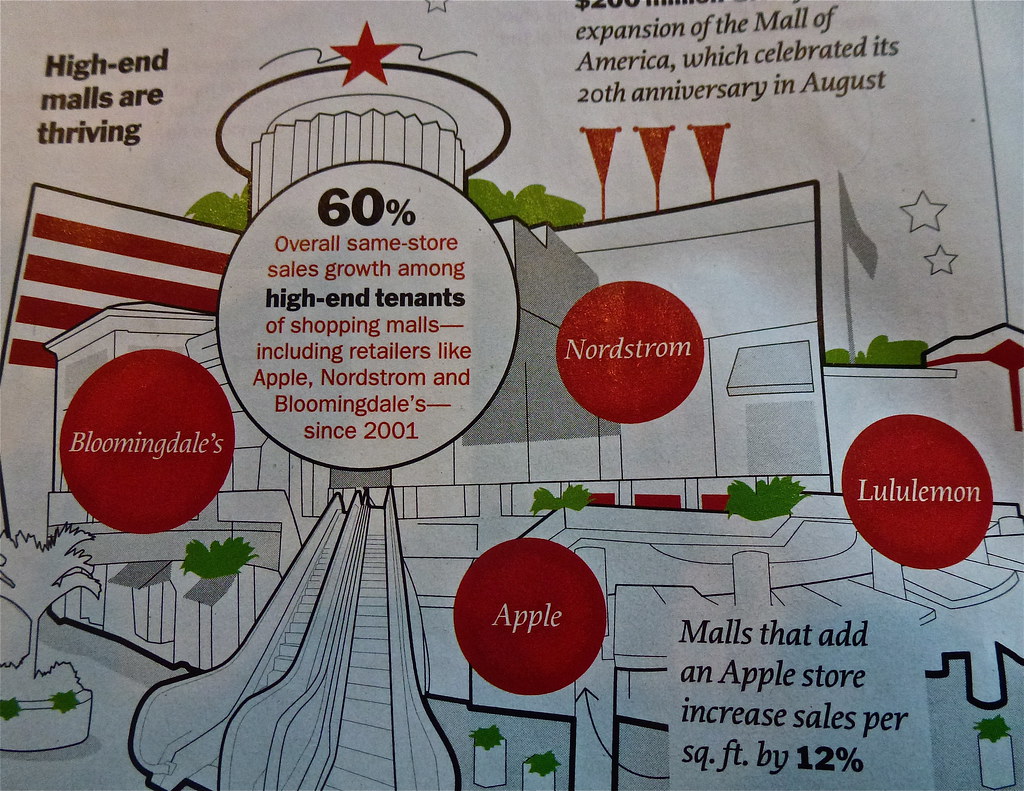 Click on photos to enlarge.  The upper end is good. 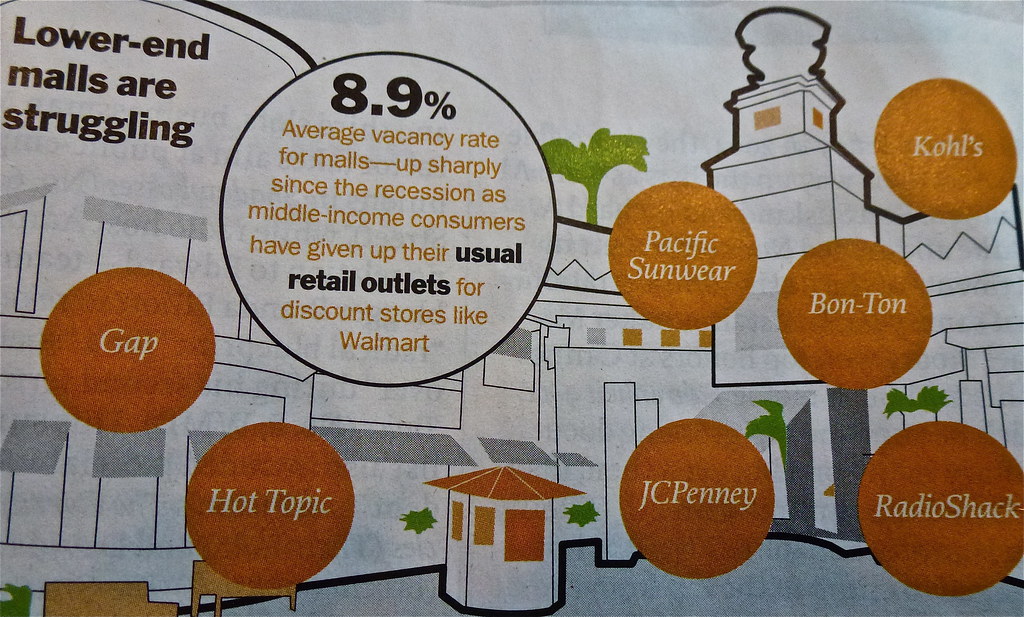 The lower end is suffering. 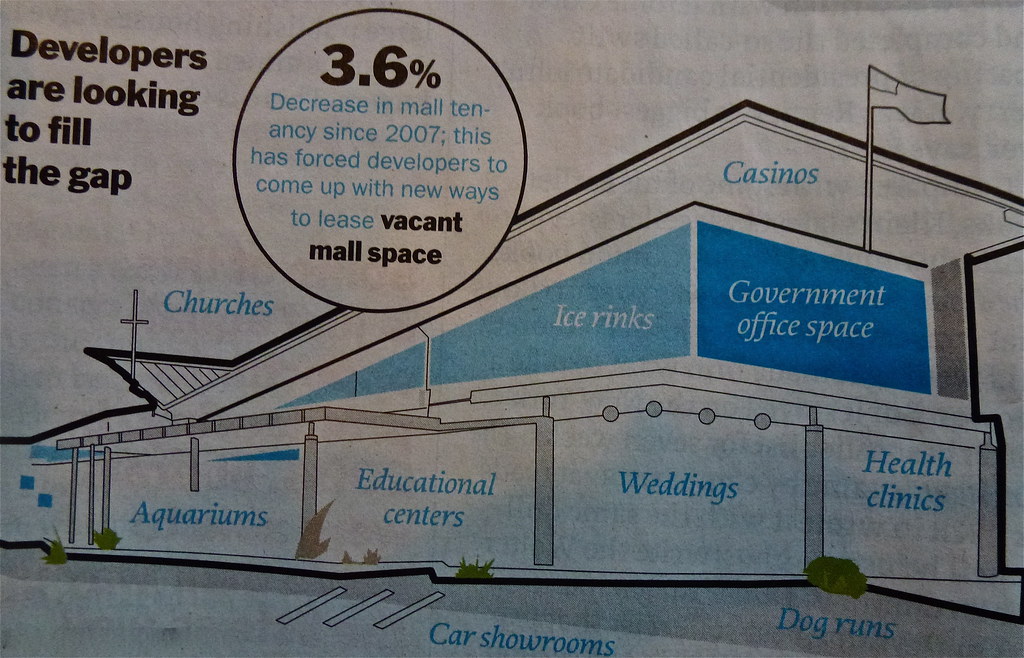 These alternates may offer opportunity.

The key to success in changing times to to look for these shifts and calculate how they will affect value.

Jyske Global Asset Management (JGAM) looks at how Pain in Spain may alter valuations in Europe and the eruo.

JGAM wrote in their latest market update:  Pain in Spain

The main topic of the week was when – or if – Spain will request a sovereign bailout.  Investors became concerned and the euro (EUR) suffered.

The general perception is that Mariano Rajoy, Spain’s prime minister, will do whatever he can to avoid asking for a bailout. A bailout would allow the European Central Bank (ECB) to implement its announced bond-buying program. Rajoy faces two challenges; risk of not getting re-elected and strict austerity conditions set by the EU Commission. Rajoy was elected on a promise to save the economy, not to lead it into a bailout. Voters will punish him if he accomplishes the latter. Also, having to accept strict bailout conditions from the EU would be perceived by the Spaniards as a defeat. There is already violent anti-austerity protests in Madrid.

Therefore, given Spanish bond yields’ recent steep fall and the fact that Spain has already achieved about 85% of this year’s debt issuance, there is a high probability that Rajoy will resist asking for a financial rescue. The situation was somewhat relieved at the end of the week when Rajoy announced Spain’s 2013 budget. The government unveiled 40bn EUR of spending cuts, slightly more that the market had anticipated.

The uncertainty about Spain was accompanied by concerns about the state of negotiations between Greece and its creditors as well as differences between France and Germany over a banking union.

Worries about Spanish bonds have pushed their yields to the point where they offer carry and forex potential.
Change and shifting trends in currencies and interest rates can also create special value.

A September 28, 2012 Bloomberg Business news article “Spanish Bonds Pare Declines Amid Bailout-Request Speculation” by  David Goodman and Emma Charlton said:  Spain’s 10-year yield earlier rose above 6 percent for a third day before the results of stress tests on its banks are released today. The rate still had its biggest monthly decline since December. German bunds extended their longest run of quarterly gains since 1998 even as a report showed euro-area inflation unexpectedly accelerated in September. French bonds rose for the first week since August as President Francois Hollande’s government delivered its budget.

Imagine borrowing dollars or Euro for 3% and earn 6% on Spanish bonds.

If you borrow euro there is no forex risk, but no forex profit potential.  If you feel the dollar is undervalued versus the dollar… borrow greenbacks…, or a mix of euro and dollars (or you can borrow yen).

Check with your banker or Jyske to see all the particulars as there are some upfront loan costs plus bond yields change by the minute.  Plus be sure to calculate potential losses as well as profits.

Learn how to calculate profits and losses on multi currency loans with our report Borrow Low Deposit High.

iShares Barclays Spain Treasury Bond ETF is a UCITS compliant exchange traded fund incorporated in Ireland. The Fund’s objective is to provide investors with a total return by tracking the Barclays Spain Treasury Bond Index. This ETF invests in physical index securities and aims to offers exposure to Euro denominated Spanish government bonds.  The trading code is SESP in London and IESP in Europe.

Join us this weekend and meet Thomas Fischer from JGAM as well as US brokers who can purchase London ETFS like this Spanish fund.

We have two spots left at the October 5-6-7 seminar this weekend.