Anti success…history suggests…. becomes the norm.   This appears to be the state of current economic policy as well.

In the late 1980s the Tokyo Stock Exchange and Japanese real estate market were hot.  Japan was THE place to be.  Michael Creighton wrote the novel “Rising Sun” about how Japan was going to buy up all… well at least a lot of the US.   The Nikkei Stock Index skyrocketed and hit an all-time high in December 1989  of 38,957.44.   Downtown Tokyo commercial property was selling for $20,000 a square foot. Real estate in Tokyo alone was reckoned to be worth more than all the land in California.

Sound familiar… bubbles in the stock and real estate markets sucking the bank into bad deals?

Then as the chart above shows the market inevitably crashed.  Tokyo commercial prices dropped 99%.  Japanese home prices fell 90%. The Japanese government jumped in, flooded the market with cash… dropped interest rates to almost zero to get things stimulated.

Some stimulation.  That plan worked well.

This is one reason why our International Investing Seminars offer unusual ideas in out of the way places. 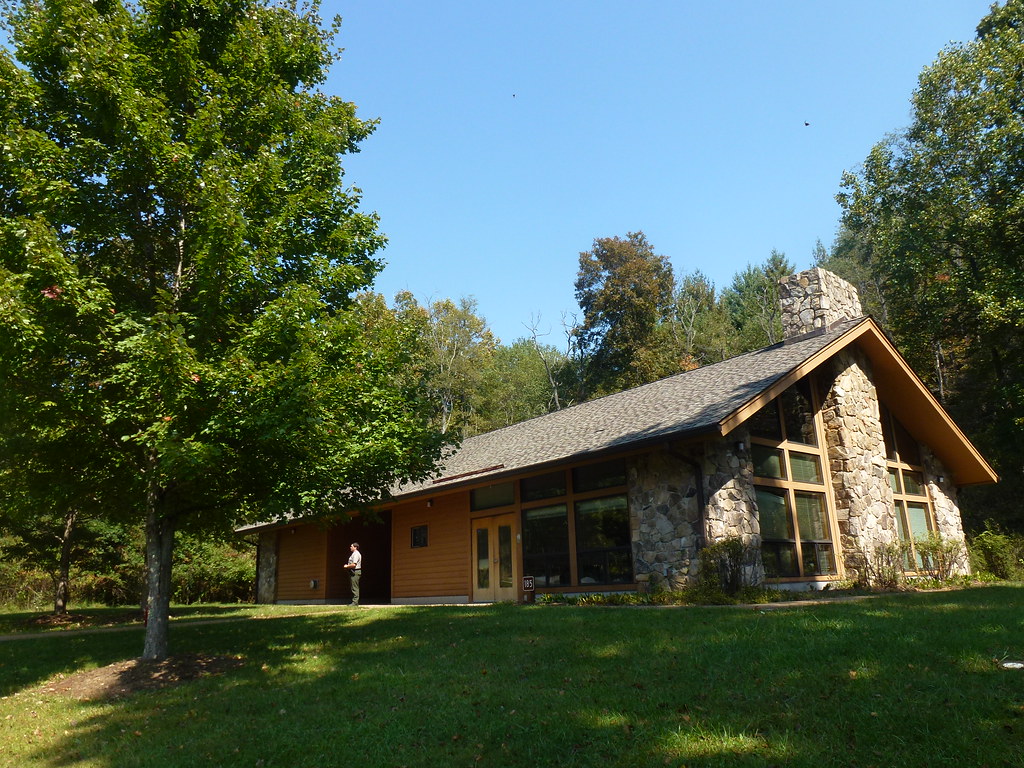 Our Oct 5-6-7, 2012  Super Thinking + International Investing and Business Seminar will be in this remote conference center, surrounded by…. 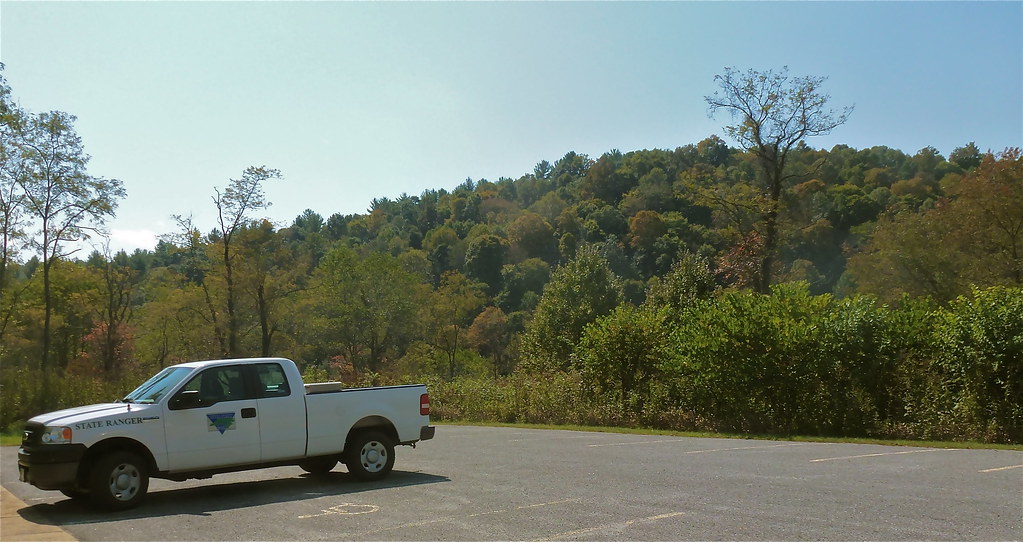 a forest… at the New River community room.

We meet in out of the way places to get away from every day thinking, because despite Japan’s policy failure, Europe and the US have adopted similar policies to stimulate their economies after the 2007 – 2008 US economic crash.

Thank God for China and its economic expansion to at least keep the global financial train chugging along.

JGAM wrote in its latest market update:   On fundamental economic data, the past week didn’t offer news that could change the overall picture of a global economy in poor condition. Most significant were disappointing purchasing managers’ data (PMI) from China and the eurozone. PMI from China was preliminary, but indicates a slowing economy. Especially, the PMI readings suggest that the eurozone is in recession and will continue to be so for the rest of the year. Also, FedEx offered a note of caution as it cut its full-year earnings forecast. FedEx is as a global logistics company seen as many as a proxy for global economic activity.

The Japanese have not gained either because they are still holding onto their same dismal formula.

JGAM says: Therefore, it came as no surprise that Bank of Japan this week decided to join the central banks in the US and the eurozone by easing monetary policy. Tokyo said that it will boost its asset-buying and loan program. Initially, this announcement caused a drop in the value of the yen (JPY), but the effect was short-lived.

The Europeans have also followed the same failed policy as JGAM notes:  On the currency markets the euro (EUR) could not sustain the strength gained after ECB’s recent announcement of a bond-buying program and hence, EUR has fallen back below 130 US dollar (USD).

The fundamental problem remains that governments do whatever they will do poorly compared to private enterprise.  So when the government tries to stimulate the economy they do in a way that is aimed at attracting the most votes… not in a way that actually works.  Political thought is short term and this does not bode well when long term resolutions are sought.

A September 25, 2012 New York Times article “Test for Obama as Deficit Stays Over $1 Trillion”  by Jackie Calmes shows that this problem of bad government spending and interference is not over.

Here are excerpts: Four years ago, Barack Obama campaigned for president on a promise to cut annual federal budget deficits in half by the end of his term. Then came financial calamity, $1.4 trillion in stimulus measures and a maddeningly slow economic recovery.

Now, despite small annual improvements, the deficit for the fiscal year that ends on Sunday will surpass $1 trillion for the fourth straight time.

Mr. Romney is proposing to reduce the deficit and encourage economic growth by substantially shrinking the government — unrealistically so, in the judgment of many budget experts — while further cutting taxes and increasing spending on the military.

Mr. Obama wants to combine spending cuts and tax increases on upper-income households to close the fiscal hole without fundamentally reducing the role of government or altering the government guarantees at the heart of Medicare, Medicaid and Social Security.

But long-term projections are notoriously unreliable. And in any case, budget analysts say that if the nation’s goal — at a moment when the economy is still shaky — is to start moving seriously toward fiscal balance, neither approach is likely to prove equal to the problem.

The plans of both, analysts say, would leave the public debt continuing to rise over the next decade as a percentage of gross domestic product, the measure that economists favor.

In other words… neither Romney nor Obama can keep their pre election promises and even if they did… the efforts would not work because the entire concept is flawed.

By thinking differently, we can see ways to profit in these stagnant economies.

For example during the Japanese crash our portfolio and many at Jyske Bank made 40, 50 even 100% gains in a year because they were leveraged with Japanese yen loans. Investors borrowed low…yen at 3% and less and made extra profits  and deposited high… bonds in Brazil and Mexico paying 10%… 12%, even 14% and more.

The positive carry (difference between loan cost and interest return) was pure profit plus forex profits were made as well.

This is still possible but with other type loans… though leverage does increase the risk of volatility and loss as well as higher profits.

Here were the portfolios before recent additions.

Here are the portfolios. Click on the photos to enlarge. 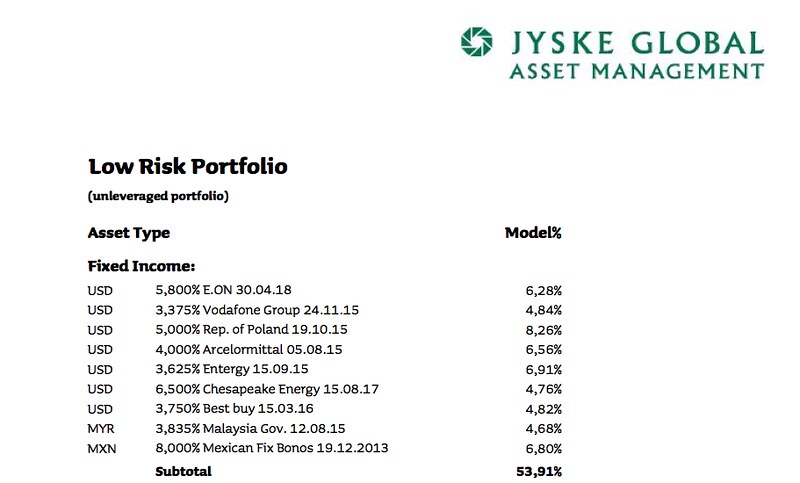 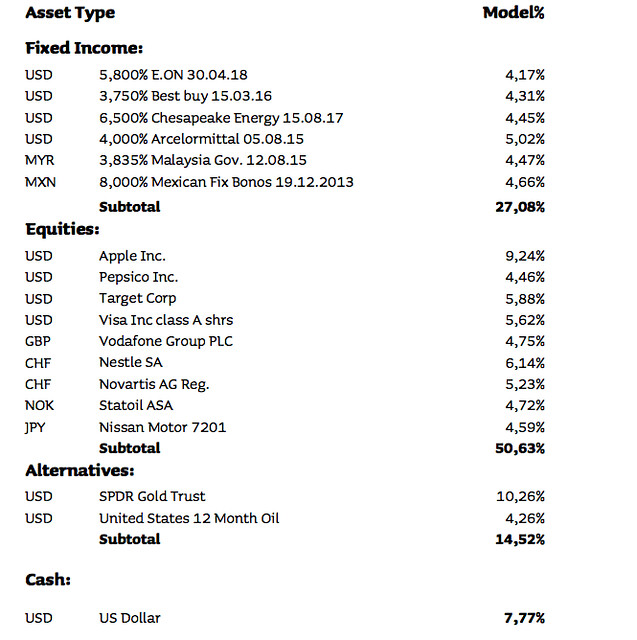 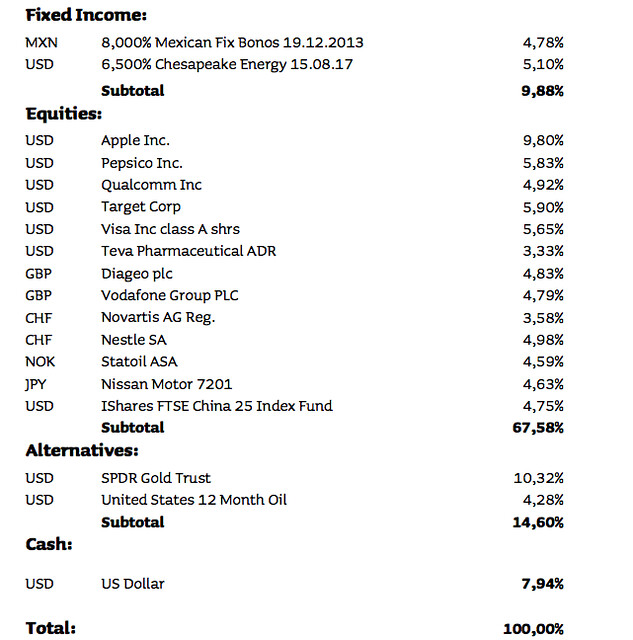 During the period 6-12 September, 2012 the Investment Committee decided on a number of new investments that have now been carried out. We decided to expand our equity universe with two European equities and to re-allocate our fixed income portfolio in order to obtain a higher yield while maintaining a moderate duration.

You can direct questions to me or contact Thomas Fisher of JGAM at fischer@jgam.com

Non US investors should contact René Mathys of Jyske Private Bank  at mathys@jbpb.dk

Or you can join Thomas Fischer and me… our Ecuador export expert, plus a tax and pension specialist at our October 5-6-7 seminar to learn unusual ideas on how to protect your savings… gain extra profit and make sure you have a never ending income.

We’ll analyze the Prysmian Group, a leading player in the industry of high-technology cables and systems for energy and telecommunications. This company has with sales of nearly 10 billion dollars in 2011.

We’ll see how the Italian connection in this global company, (subsidiaries in 50 countries, 97 plants, 17 R&D Centers and about 22,000 employees) creates special value.  In addition you’ll see how this technology creates opportunity here in Small Town USA.

The seminar will be near Scottville, North Carolina (founded by an ancestor perhaps!) 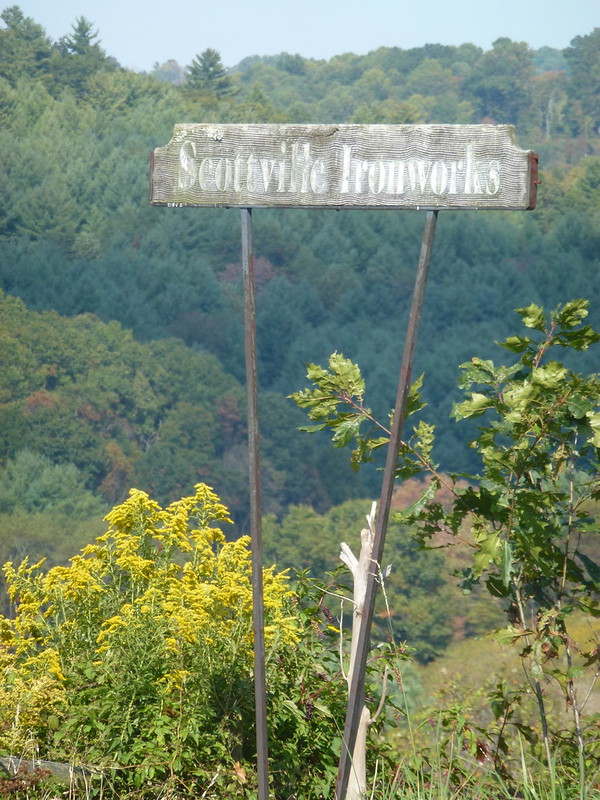 on the New River. 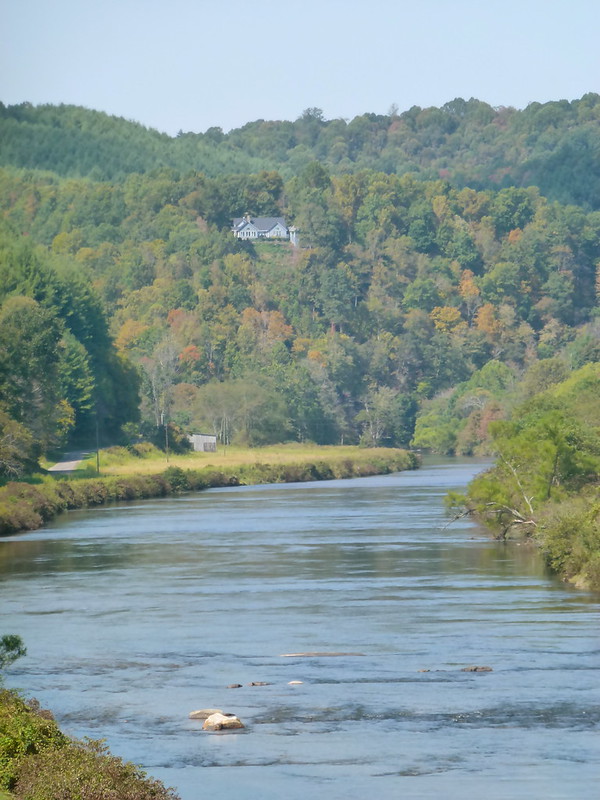 New River at the General Store 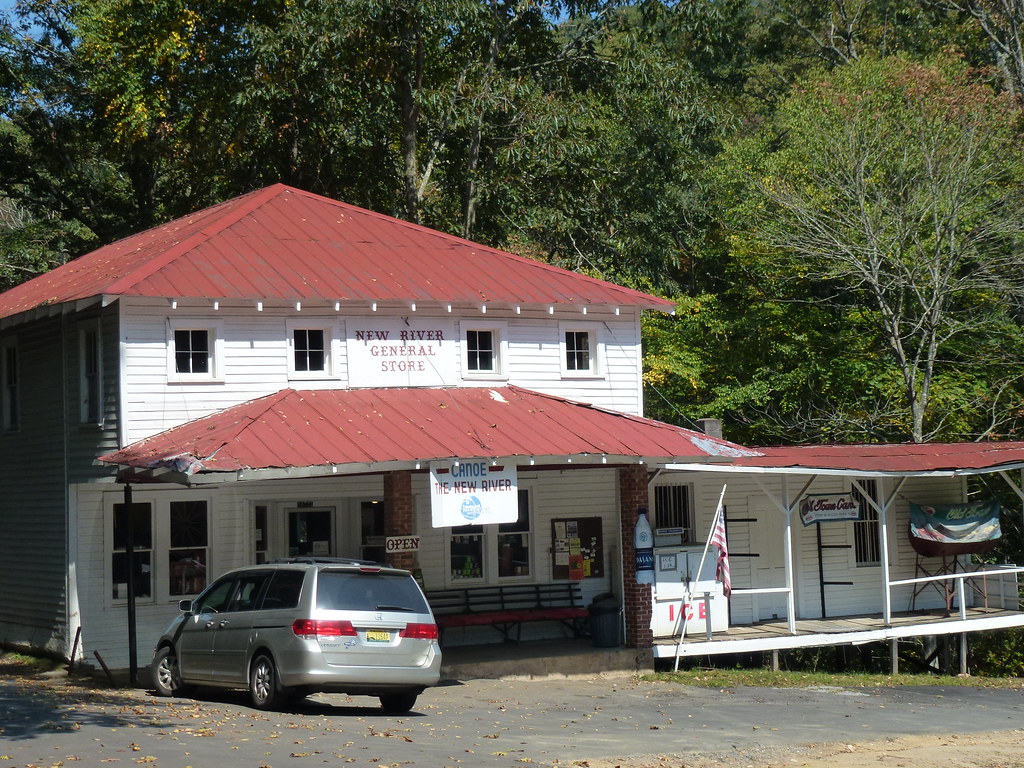 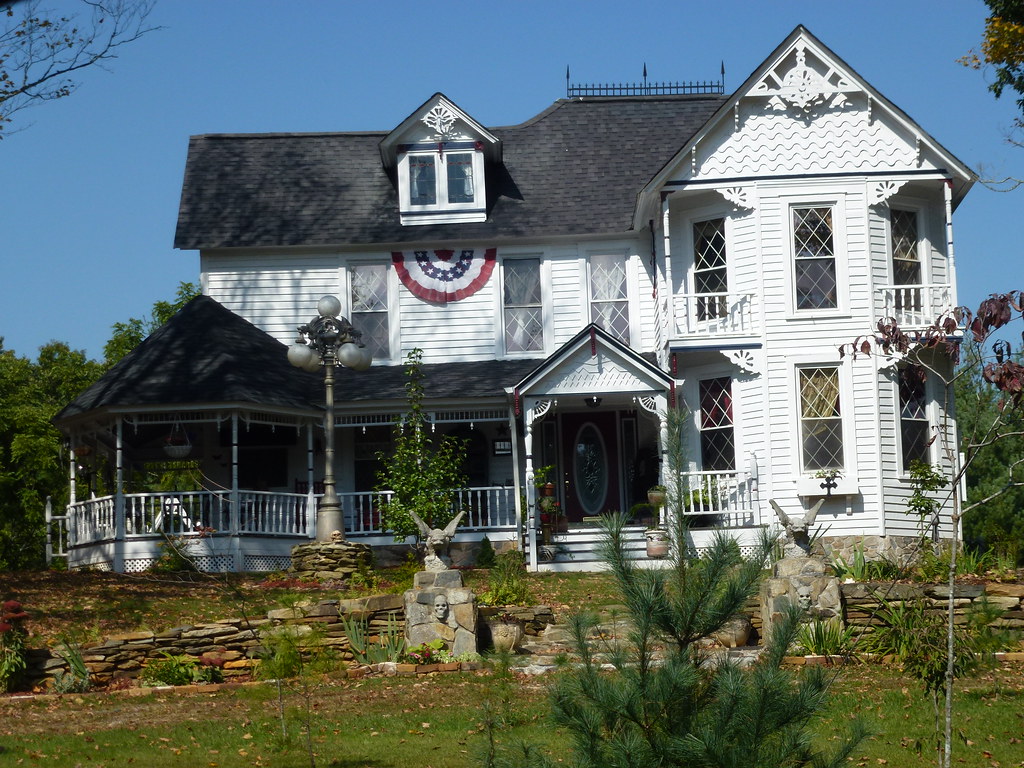 We’ll see why due to new technology and old regulations there is special opportunity in this part of Smalltown USA.

Those interested can view real estate in the area.

There are four places left for the seminar below so enroll asap.