This month there has been a trifecta of value recovery for those weighted out of the US dollar.

Value investors are often a lonely lot… because value is found in unusual places… that are out of the way.   When everyone is doing something… the action becomes fashionable and prices rise too high.

Three events came together at about the same time so readers who have been reading this website in preparation for our October 5-6-7 Super Thinking + International Investing and Business Seminar have enjoyed a nice spurt of profit.  For those who borrowed dollars low and deposited euros high the profits have been very nice.

The three events are the Fed’s action… European Union action and more trouble in the Middle East.

To those who said we Europhiles were crazy to be investing in the Euro… here is our revenge. 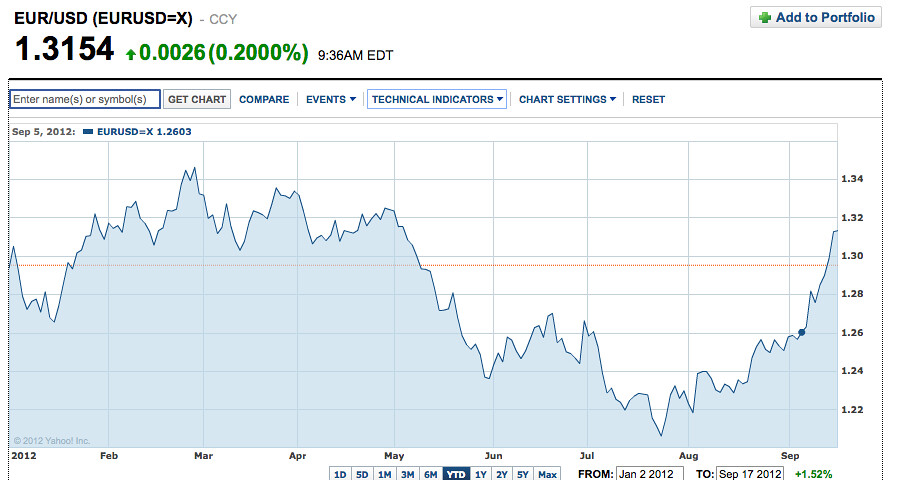 www.finance.yahoo.com euro to US dollar account as of yesterday at 9:30 Eastern time.  (Click on photo to enlarge).

For those who thought we were even crazier to be investing into Britain’s recession with 10% Skipton Building Society pound denominated bonds that pay almost 10%… here is our spurt of profit as well. 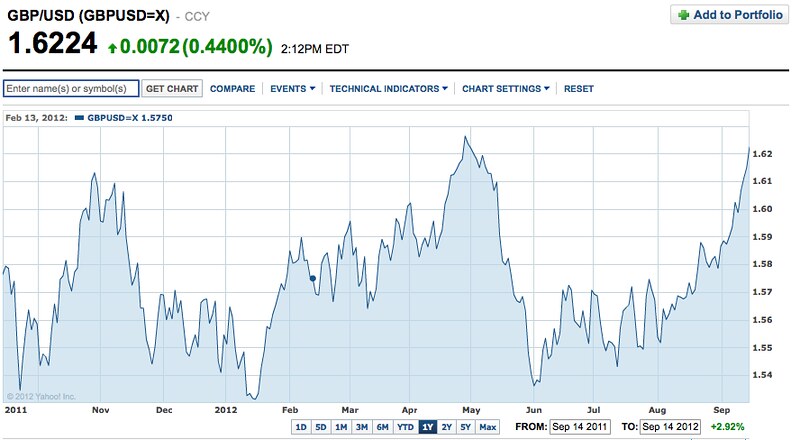 British pounds to the US dollar www.finance.yahoo.com

For those who thought we were totally nuts to invest in more Unicredit shares… here is our double profit… the share spurt… and the currency because Unicredit is denominated in Euro. 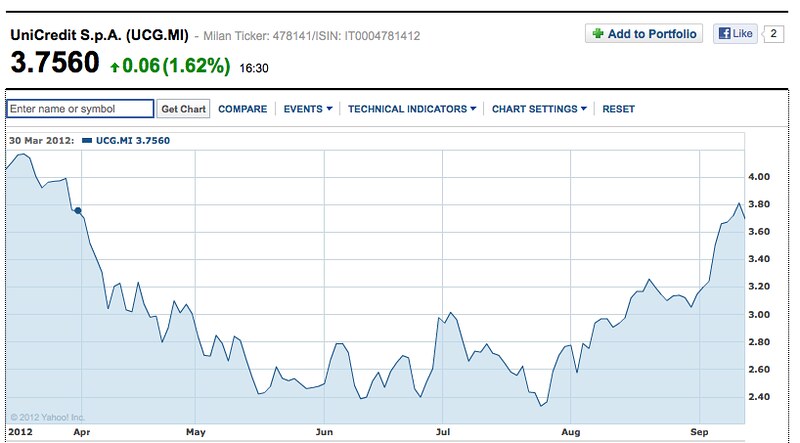 Those who leveraged their speculations earned even more.

Honestly it is not fair to just grab one moment of time and look at profit or loss.  This is not a suggestion that we’ll see the same spurt this month… but these sudden profits were expected. We just did not know when.  This is the lot of a value investor… to buy good value and wait for the forces of reality to prevail.  At times the portfolio will show losses… even more if the portfolio is leveraged… but reality is on your side when you invest in value.  You stack the odds in your favor especially if you can be patient and wait for the spurts.

At our upcoming October seminar we look at how to calculate potential gains and losses and how to lock n profits after a spurt.

These three events (in the Fed, EU and Middle East) by the way did not cause profit spurts.  Events do not cause spurts.  Imbalances in value are the forces that move markets and prices.  Events just get a ball rolling.

The First Event was created by the Fed.

Last week’s New York Fed Times article entitled “New Aid to Jobs Recovery in Forceful Move by Binyamin Applebaum  shows how the Fed has started a ball rolling… one that could be a big ball that rolls for a long time.

Here is an excerpt from the articles:  The Federal Reserve opened a new chapter Thursday in its efforts to stimulate the economy, saying that it intends to buy large quantities of mortgage bonds, and potentially other assets, until the job market improves substantially.

This is the first time that the Fed has tied the duration of an aid program to its economic objectives. And, in announcing the change, the central bank made clear that its primary reason was not a deterioration in its economic outlook, but a determination to respond more forcefully — in effect, an acknowledgment that its incremental approach until now had been flawed.

I agree with part of Bernanke’s statement… that the previous approach has been flawed.  There are at least three problems n this policy.

Policy problem #1:  This makes it more attractive for banks to deal with the Fed than with businesses.   The Fed’s policy has made credit really inexpensive.  Just one problem… you can’t get these cheap loans.  Why in the world would a bank lend to a risky business when it can make great profits dealing with the Fed instead?

Policy Problem #2: The low interest rates destroy the concepts of investing and pensions as we have known them.   No supposedly safe investment gives any return at all so investors are forced to speculate instead… or risk watching the purchasing power their savings and pensions obliterated… because these policies will bring inflation eventually.

Policy Problem #3: The two problems above are being financed by accounting slights of hand.  The Fed creates money by calling debt an asset.  This eventually leads to the deterioration of the monetary system… the social promise and the stability of the nation.

Ben Bernanke has really added downwards pressure on the US dollar. Today the dollar is trading to the euro at 130.50 and I think we could easily see 135 in the near future.

With the so called fiscal cliff approaching and a presidential election much uncertainty is still expected – should be a strong case for diversifying outside the US and the US dollar.

The Second Event is Perceptions of More Stability in Europe.

JGAM wrote about this as well and said:  The waiting game is over, as the German high court, the Dutch electorate and the Fed all delivered what the financial markets have been seeking, namely clarity and stimulus.

Wednesday investors shouted “Yes” as the German high court ruled that the European Stability Mechanism (ESM) did not violate the country’s constitution. The court did, however, state that the German parliament must vote on any further increases to the ESM. Germany is currently liable for about 27 percent or 190 billion euro to the European bailout scheme of 700 billion euro.

In the Netherlands the voters shouted “Yes” to Europe and backed the two pro-European parties, while simultaneously rejecting the Freedom party, which had campaigned against an integrated Europe. The Prime Minister Mark Rutte claimed victory and said that he would seek a coalition with the Labour party that came a close second in the election.

Thursday, Ben Bernanke and the Fed did both a twist and a shout sending equities and gold higher while the US dollar (USD) took a hit against all major currencies.

The Fed announced a new round of quantitative easing (QE3) to the tune of USD 40 billion per month, indefinitely. It has furthermore extended the guidance for low interest rates through mid-2015 from 2014. Lastly, they will also continue operation Twist throughout 2013. The Fed has thus decided that improvement in the economy is more important than any concerns about possible inflation.

You can see how JGAM’s portfolios have fared below.  More importantly one can see how the higher returns have shifted towards the speculative end of the investing spectrum.

The new Fed policy guarantees that safe investments will not really be safe until at least 2015.  A more likely scenario will be that these policies which are similar to the failed policies that Japan has used for almost 15 years will keep the economy flat for three more years.  This will also almost guarantee any real return on deposits and bonds for the next several years. This will leave savings and pensions vulnerable to the inflation that is almost certain to begin when the economy comes back. 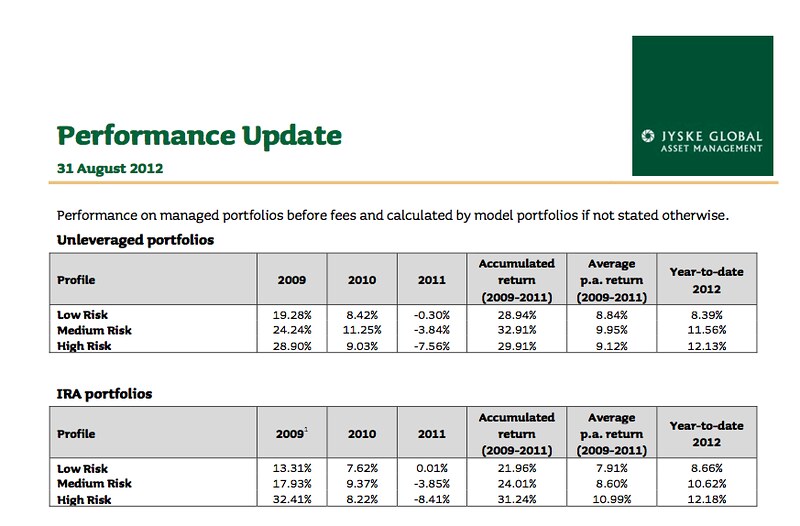 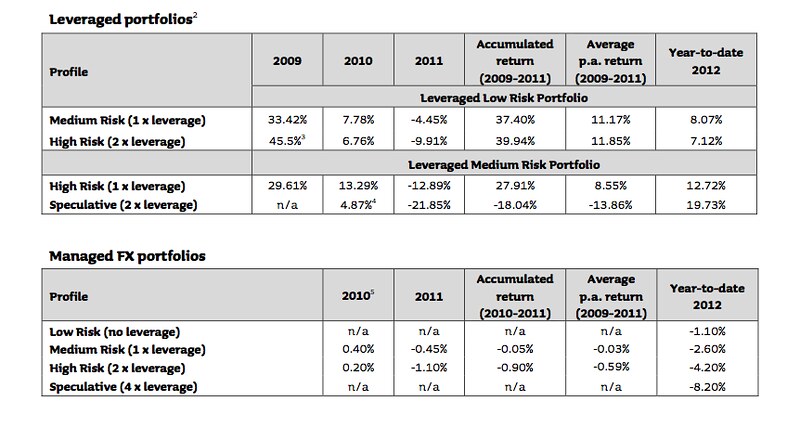 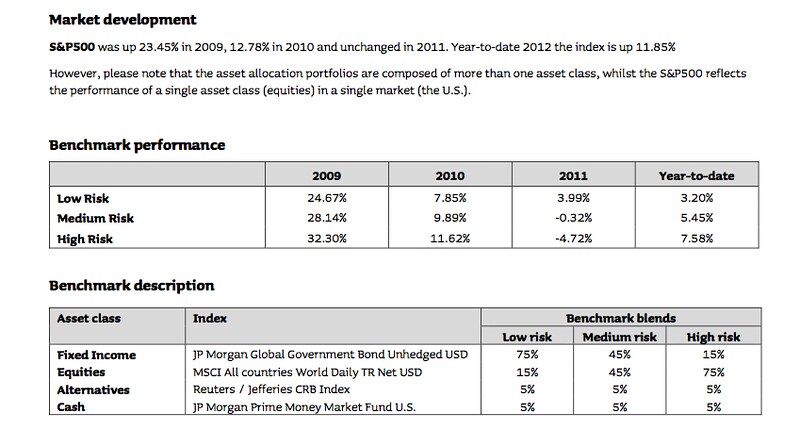 The Third Event Was a Trigger in the Middle East.

The Fed’s action did not cause the dollar to fall. The Fed just pulled the trigger.  The  same can be said for the riots and deaths in the Middle East.  The recent Youtube video about Mohammad did not cause the riots.  The years of tension between the regions were the force.  The video was judge a nudge on the trigger that released this negative energy.

Such problems create more American spending on security… less on important economic issues like education, health care… innovation… all bad in the long term for the US dollar.

The US dollar won’t always fall.  America is not the only nation suffering from decades of prosperity… aging populations… weather change and the stresses of globalization.  These simply are value distortions that had accumulated in the last recession. No one knew what to do. Europe was plagued by a rich country poor country rift. Asia’s economic growth was slowing down.   The fashion was to stampede back into the greenback.  A stampede mathematically is big numbers + moving fast = stampede.   Stampede + time = fashion.  Remember  fashion = poor value.

Learn how to value currencies and when to borrow low and deposit high at our October 5-6-7 Super Thinking + International Investing and Business Seminar.

← Honey of a Deal Ecuador Stage III Take Off →