The Best Opportunity Since 1990

1990 saw one of the greatest investing opportunities in history.

The huge opportunity from 1990 however was in Europe… mainly Germany.

The reunification boom of 1990 to 1992 had turned sour and the US economy was in recession.

German management cut 14% of the German industrial  workforce which resulted in a mild profit improvement.   However German shares were trading at ridiculously low asset valuations with improving returns that led the German stock index up 60% by the end of 1993. The following 3 years proved to be very uninteresting for anyone who missed this classic trade.

The Dax (Germany’s stock market index) rose seven times in the same period as the chart below from finance.yahoo.com shows! 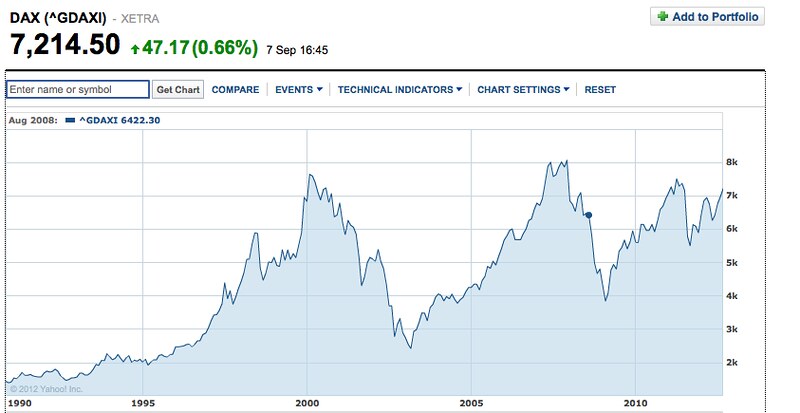 This could seem confusing… that the biggest growth periods began during times of recession, but this is a simple historical fact.   Most investors buy shares at exactly the wrong time.

This is why when Europe was plunged into some of its deepest economic woes, I began accumulating European shares.   When the banking industry seemed worse I purchased Italian and Danish bank shares and when the Italian shares crashed invested in more.

Recent messages, one Aug 16, August 20 and Aug 25, (see links below) looked at my European share portfolio.

Now we are seeing some new confidence in Europe and this speculation is paying off.

OMT, the new ingredient in the Eurozone alphabet soup

The past 5 days were another week with central banks in the limelight. Draghi of the European Central bank (ECB) played the lead role, pushing aside all negative economic data and boosting stock prices.

Turning to central banks, this week was a continuation of the story of the past many weeks and months. Central banks are either expanding monetary policy or promising to expand in the near future. The Bank of England left interest rates unchanged, but is still committed to its asset purchase program. More surprisingly, Sweden’s Riksbank cut its repo rate by 25 basis points to 1.25%, as a response to a recent appreciation of the Swedish kroner (SEK).

Finally, the long-awaited ECB plan for sovereign bond purchase was released on Thursday and was named “Outright Monetary Transactions” or in short, OMT. The ECB president, Mario Draghi, confirmed that the ECB is willing to purchase unlimited quantities of short-dated bonds to ease funding pressure on governments in trouble. However, the bond-purchase program requires governments seeking bailout to obey to fiscal restrictions set by the EU and monitored by the IMF. It remains to be seen, whether Spain and Italy are ready and willing to accept the “Greek troika” of EU, ECB and IMF to intervene in their economic affairs.

The weak economic data and the central bank’s intervention had the effect that both the euro and gold reached new heights during the week. Today, the euro went above 127 USD and during the week gold rose to a six-month high above 1,700 USD an ounce. At JGAM we assess the dual rise of euro and gold to reflect both a temporary relief in the eurozone and a continuing fear of aggressive central bank expansion eventually leading to inflation if not rolled back in time.

Already this shift has brought me profits with the unicredit shares. 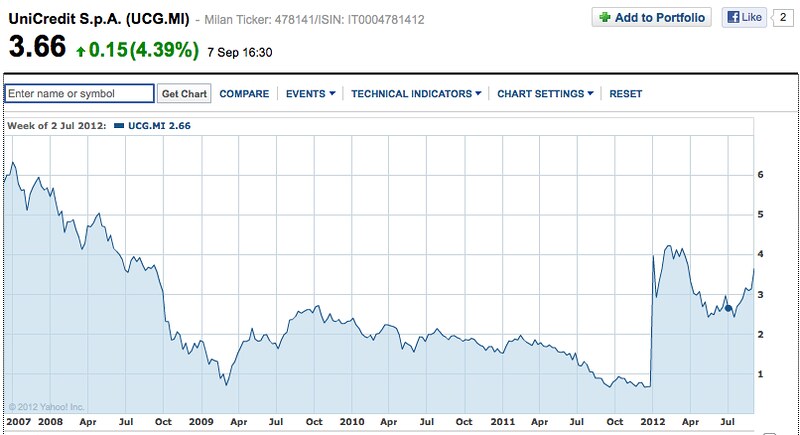 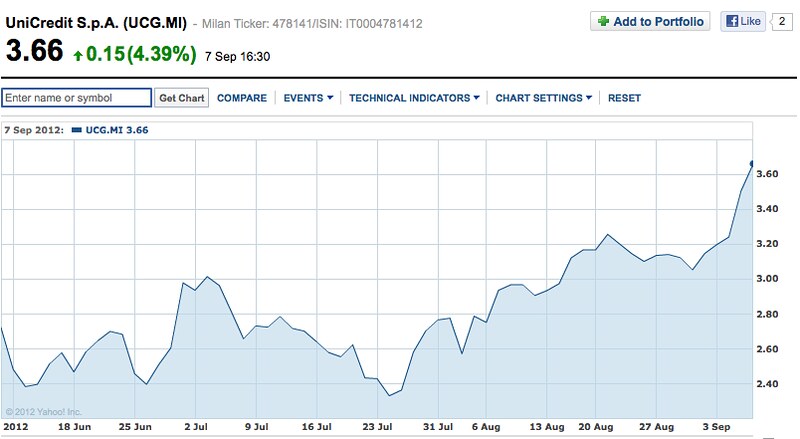 Plus the Euro has added strength. 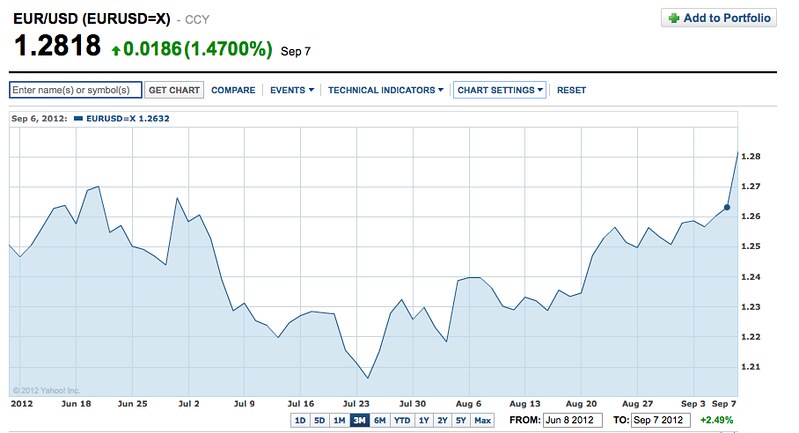 Euro rebounding versus the US dollar since the August articles.

Nice.   Yes short term profits like this are nice but really meaningless and this is not the opportunity.   The opportunity is in a shift of perspective  that heralds the beginning of the next 15 year bull market.

There are three upwards forces working in the European bank sector now.

The director of European Investments at another of my investment advisers sent a note on why he felt that European banks were in his opinion the best investment proposition since 1990.

He sent graphs that explain all we really need to know about equity investing.  He said: “If you and I had been shown these slides at the beginning of our equity investing careers they would have allowed us to ignore the large part of top down data that is simply noise, would have allowed us to focus on the only 2 equity valuation parameters that drive returns and would have turned us into Warren Buffett clones – albeit without his exceptional talent.” 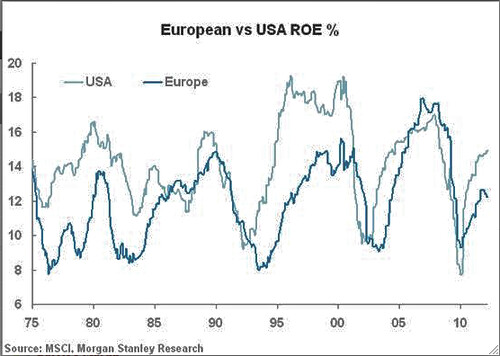 This graph shows the return on equity in both the US and Europe over the past forty years.  They show a clear pattern that economic cycles should be expected and how these cycles create opportunity.  Opportunity grows in recessions because regardless of what corporations face, plague, war, recession, political or energy crises… managements adjust and rebuild profits by cutting costs, reducing working capital and increasing margins through consolidation.

The important point is that investors pay premium prices at the worst times when at the upper peaks of cycles when business is easy,  there are bloated cost bases, over-priced acquisitions and high cash flows are being invested in increased capacity that will not be required when the cycle turns.

These cycles seen in terms of return on equity rise and fall between 10% and 18%.  Investors should value those profits streams differently.   When the Return on Equity (ROE) is at an 18% peak investors should pay less because at the peak profits are unsustainably high.

When ROE is at a low 10%  investors should pay more because during the troughs profits understate true earning power.

Most investors do exactly the opposite!  (See chart below which shows the price to book rising and falling as profits rise and fall, not the other way round).

Value investors such as Warren Buffett do not make this mistake.

For 40 years Buffet has been buying when asset values are cheap and avoiding over-extending when profit cycles are at peaks.

Most investors err because they are overly influenced by optimistic and pessimistic newsflows and they ignore value.

This basic creates a remarkable investment proposition based on the Return On Equity (ROE) and price to book of the European banking sector.

Equity investors have continued to price this sector’s profit stream in a completely consistent way based on headline grabbing newsflow.

Because this type of investing is totally flawed we can make Buffet-like returns.

The chart below shows that return on earnings on European banks is at almost an all time low. 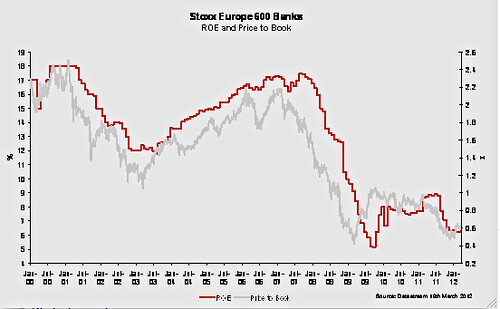 This chart and economic logic shows that ROE of the European banking sector should move from 6% to 9% over the next three years so price to book can be expected to rise 50%.  This improvement would require 20% earnings and dividend growth over the 3 year period so that your total return would be comfortably over 60%.

There are three  business reasons behind this rise.   Lending volumes drive the quantity of the banking sector’s returns whereas net interest margins… cost/income ratios… and loan loss provisions drive the quality of returns.

First, cost/income ratios are falling in almost all banks in Europe. This is totally under the control of management and they want to reduce costs.  All the European banks are reducing staff, rationalizing branches and this cost cutting will continue through at least 2014.

Second, net interest margins will improve at almost all European banks.   Interest rates are almost at zero and aren’t likely to rise any time soon. However loan costs are rising.   This began in Denmark. All the major banks have hiked loan costs on three occasions in the last eight months.  Italy, and Eastern Europe hiked their costs next.

I was happy to see this since my shareholdings and those I have been recommending are in Jyske (Danish and Unicredit (Italy and Eastern Europe).

Third, loan provisions are set to fall pretty aggressively from now onwards.  The emergency provisions associated with the 2011 chaos have caused the current lending practices to be much safer and conservative than those from 2005 to mid-2008.

Portuguese banks for example only grant individual mortgages to those who put down a 40% deposit and to export oriented businesses.

European loan books are being massively derisked.  Loan books at end 2014 will have no semblance to anything that was created by the easy credit conditions in 2006 & 2007.

Here are the three big moves that can bring such great opportunity.

#1: End of the the 15 year bear and a rising stock market while investor sentiment remains bearish.

#2: The return to a falling US dollar.

#3: Low interest rates so investors can borrow low and invest high at almost no cost.

The time of greatest investing opportunity are the first seven years or so of a 15 year bull market when investor sentiment remains low. Big smart money pours in and takes profits in the later years as a bubble forms on positive investor sentiment and news.

The last great opportunity began around 1982 through 1990.  This new bull form has an added advantage of much lower interest rates than in the early 1980s and we will focus on the opportunity now and the advantages (and pitfalls) of Borrow Low-Deposit High speculations at our upcoming Super Thinking + International Investing and Business Seminar October 5-6-7.

This October Course is special because we’ll conduct it at New River State Park near West Jefferson, North Carolina. 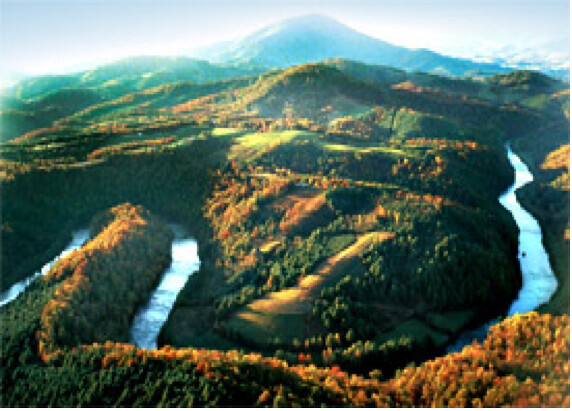 The key that makes these courses unique… like nothing else available are the Super Thinking sessions that have been created from Merri’s and my experience with ancient wisdom from Europe, Asia and the Andes.  Part of this wisdom is aimed at getting our minds into a state of relaxed concentration so we can think clearly despite the bombarding of noise in the news, over the net and on TV.

Super Thinking returns us to our natural though patterns and there is no better place to do this like in nature… in deep woods surrounded by forests… away from the maddening crowds.

The park is only seven miles from West Jefferson. The drive is sublime especially in October during the leaf change when the forest looks like this. 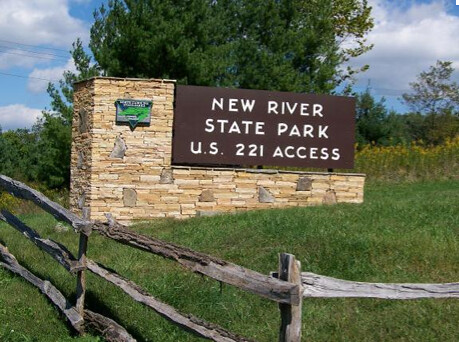 The park’s website describes the park:  Rugged hillsides, pastoral meadows and farmlands surround what is believed to be one of the oldest rivers in North America the New River. Its waters are slow and placid. Its banks are fertile and covered with wildflowers. Dedicated as a National Scenic River in 1976, this gentle river is the centerpiece of New River State Park. 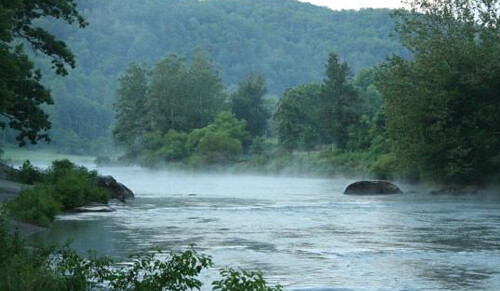 The New River area still maintains an old-fashioned charm. Mountain roads are narrow and winding, dotted with small farms, churches and country stores. The river itself is tranquil, offering good bass fishing, trout streams, excellent birding and inspiring mountain scenery. But perhaps the best way to absorb and appreciate the river’s peacefulness is from the seat of a canoe as it glides across the slow-moving waters. Four areas with access to this waterway make up more than 2,200 acres of New River State Park and provide spots for camping, canoeing, picnicking and fishing. 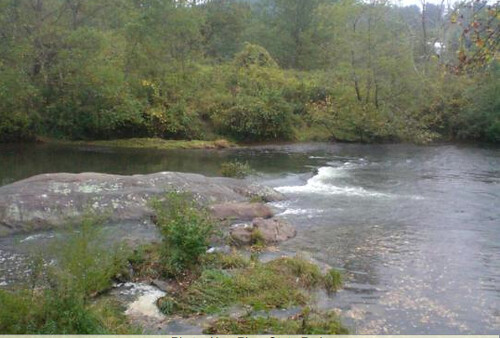 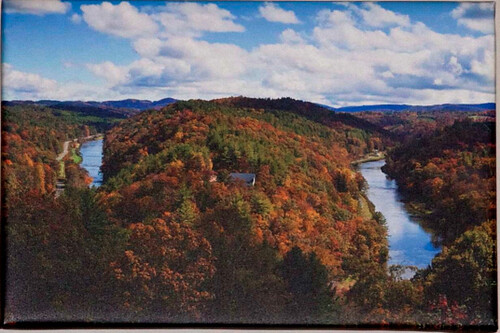 The park has a wonderful meeting facility… a community room… huge fireplace… large windows in nature surrounded by peace and tranquility of the woods… a great place to learn! 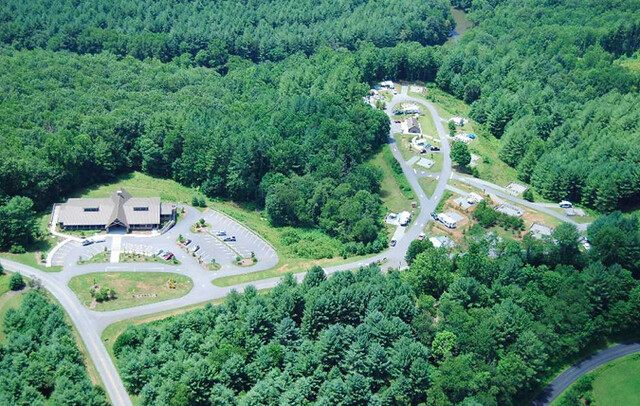