We are almost at the end of the 15 year bear in the 30 year equity cycle. 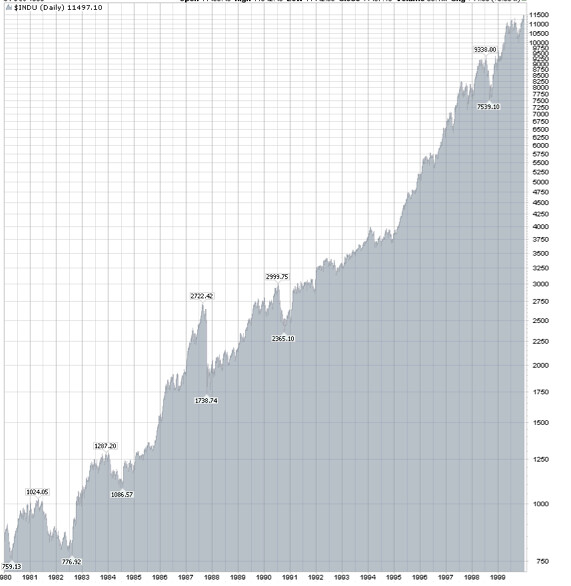 This chart from stockcharts.com shows the Dow from 1980 to 2000.  This is what happened at the end of the last 15 year bear cycle.

A main feature at this site (and our printed newsletter decades before) has been the importance of 30 year cycles (15 year bull and 15 year bear) in the stock market and how to use Borrow Low-Deposit High leverage.

We have not shared much on leverage since 2008 because we are ultra conservative and because our analysis of the 30 year cycle cycle suggests that the next stock upswing will not pick up until 2014 to 2015.

However, now is the time to prepare for this next huge jump… so just this last week we began reviewing the idea of becoming more speculative in equities. We also opened up once again the idea of adding leverage.

I was pleased to see that Tom Ruggie of Ruggie Wealth management has also recognized the turning point in this important three decade economic wave.

Ruggie wrote in his weekly commentary this week: SOMETHING BEGAN IN THE STOCK MARKET 30 YEARS AGO that still has people shaking their heads today. Back on August 12, 1982, the Dow Jones Industrial Average closed at its 1980-82 recession low of 776.92, according to The Wall Street Journal. Around the country, it was just an ordinary day in an otherwise economically challenged economy. But, on Wall Street, it was the beginning of something extraordinary.

Depending on your age, you may remember that back in 1982, the prime lending rate peaked at 17 percent, the unemployment rate was near 11 percent, and inflation was on the way down from the double-digit rates of 1979-1980, according to The Wall Street Journal and the Bureau of Labor Statistics. Demographically, the oldest Baby Boomers were a youthful 36 and just getting ready to unleash their penchant for big spending. Ronald Reagan was President, Paul Volcker was head of the Federal Reserve, and, while an unlikely pair, they were about to make history together.

Reflecting back on the summer of 1982 in a 2009 Wall Street Journal piece, Jason DesenaTrennert wrote, “Starting as a trickle, the decline in inflation and long-term interest rates picked up speed that summer, and investors in common stocks began to have confidence that they were being liberated from the shackles of double-digit inflation and interest rates, an innovation-sapping regulatory regime, and a tax code that was antithetical to capital formation.”

Awakening from its slumber the day after August 12, 1982, the stock market took off on an unprecedented 18-year bull market run that saw the Dow Jones Industrial Average rise a spectacular 1,500 percent, according to Bloomberg.

So, here we are, 30 years removed from the start of that great bull market and what do we have to show for it? Well, since that great bull market ended in early 2000, we’ve experienced two harrowing bear markets that saw the broad market decline around 50 percent. And, today, we’re still below the all-time high of late 2007.

Yet, here’s what is extraordinary. Despite the weak markets we’ve experienced since 2000, if you go back to August 1982 and look at the returns for the past 30 years, the market has done extremely well. According to The Wall Street Journal, the total return of the S&P 500 index was a compound 11.3 percent between August 1982 and now. That’s even better than the average return for the entire 20th century, which was 10.1 percent, according to the Journal.

It’s easy to get too caught up in what’s happening today in the markets and lose sight of the big picture. Instead, it’s better to take the long view. While past performance is no guarantee of future results, the past 30 years have shown that patience may be rewarded.

I concur…investors should take the long term view and all the advisers I follow… JGAM… Keppler Asset Management… Ruggie Wealth Management and my London brokers have positive comments about how inexpensive equities are now.

Hence the recent message at this site Great Global Investing Adventure which showed how my portfolio rose 72.4% and could have risen 239% with fully hedged leverage.

The next message last week was about Brookfield Power which has returned 32% PA since I invested and could have 107% PA with a non hedged leverage.

Of all the European sectors the financial sector is one of hardest hit. This means that this is a good place to look for extra value.  A look at the chart of iShares MSCI Europe Financials Index (EUFN) traded Nasdaqshows how volatile this sector has been… how hard hit it was earlier this year and how it is now in an upwards trend.

Upcoming messages look in more detail at European Financials and their explosive potential.

The time of greatest darkness is just before the light begins to show at the end of the tunnel.  The 30 year stock market cycle suggests we are in that dark spot…. so now is time to begin to prepare for the light… to grab opportunity before the masses and to look once again at leverage in the portfolio.