One multi currency portfolio is up 18.4%.

Long term readers at this site know that Jyske Bank has been my main investment banker for around 25 years.  I study their portfolios regularly to learn ideas on where to invest and their recent updates show how today’s global economic environment forces us into taking greater risk.

Long term readers also know that I do not recommend holding more than needed for day to day spending in Ecuador banks.  If you are a new reader see my Ecuador bank warning here.

Hi Gary, Attached our latest performance update. We are pleased with the performance and all portfolios (except the FX but hopefully we will still make a profit by the end of the year) are beating the benchmark. We have no exposure to the euro and in our leveraged portfolios we use a 100% euro funding. As you can see this has also led to a return of 18.4% in a speculative performance (medium risk with 2X). 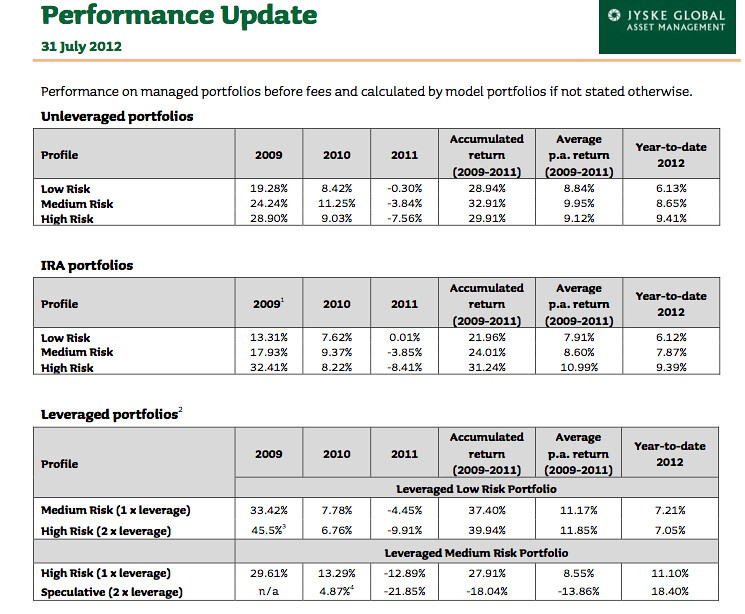 There is an important multi currency lessons to be learned here.

JGAM wrote in their latest (August 1, 2012) portfolio update that they were reducing risk in their strategy

July 31, JGAM held an ad hoc Investment Committee meeting. We decided to reduce risk exposure in all our managed portfolios for the following reasons:


·         During the second quarter financial reporting season a surprisingly large number of companies have reduced their earnings forecasts.


·         Financial markets are very optimistic that both the Fed and the ECB will and can boost economic growth and solve the euro crisis – we are however less confident.


·         So far this year we have a satisfactory performance on all our asset allocation portfolios which we want to protect to some extent in case the Fed and the ECB disappoint market expectations.

Therefore, we have sold the following stocks in medium and high risk portfolios: Cisco, Siemens, Novo Nordisk and China Mobile. In the low risk portfolios we have sold Vodafone, Nissan and a portion of Apple. All chosen stocks are considered to be of the more risky type.


Further, we have bought more gold and hence, increased the position we already have. In case the Fed and/or the ECB engage in another round of monetary easing we expect some of the excess liquidity to flow into gold.


Finally, we have put a protective stop-loss on our euro loan in the leveraged portfolios, in case the ECB manage to live up to the market’s high expectations, relieving the euro crisis and hence, cause a euro appreciation.


Bottom line is that we are still invested, but now with a less aggressive investment strategy, thereby protecting your investments with us to a larger extent. And again, we emphasize that we are NOT exposed directly to the euro or any euro stocks and bonds.

This lowered risk approach appears to be in line with events and JGAM wrote on  Aug 10, 2012:

Global stocks started the week in a mood of optimism, drawing strength from Friday’s solid US jobs report and signs from Spain that the government could request a bailout, opening the possibility for support from the ECB in the form of a bond purchasing program, announced by ECB’s president Draghi last week.
Tuesday, the Reserve Bank of Australia kept interest rates on hold at 3.5% which caused the Australian dollar (AUD) to reach its strongest level in more than four months.

However, mid-week the market sentiment changed and stocks struggled to sustain recent gains. The reasons were bad news from Germany, the UK and Greece. Germany reported industrial output and exports that fell more than markets had expected. Further, the Bank of England cut its economic growth forecast sharply. Also, Standard & Poor’s lowered the outlook on Greece’s credit rating to “negative” from “stable”.

Then, Thursday the sentiment changed again and global stocks moved higher on hopes for additional monetary stimulus to struggling economies, especially in China. Both factory output and inflation in China slowed. These bad economic news were turned into positive financial market news as they spurred new hopes for central bank intervention.

Friday – as we write – the sentiment has changed once again. Growth-focused assets, especially stocks, are being sold after disappointing Chinese trade data. It seems as if the market has decided to end the week on a downbeat note using the Chinese trade data as an excuse for some profit-taking.

At JGAM, we conclude that the positive impulse from last week’s US job data and ECB’s promise on a bond purchasing program didn’t last for long. Financial markets are again nervous and volatile, faced with sluggish economies and an unresolved situation in the eurozone.

However  the best performing portfolio at JGAM, up 18.4% is their most speculative… the medium risk portfolio leveraged two times.

This repeats an interesting multi currency investing phenomenon  that we have seen numerous times in the past several years.


This phenomenon is that a lower risk portfolio using leverage brings the highest returns.

This is one reason why I have used Jyske for so many years… they provide multi currency lending.  When a currency like the dollar, euro or yen is weak…  you can borrow at a really low interest rate to invest for a higher return.

For example in the example above,  instance JGAM’s medium risk portfolio is up 7.87%.  However because the portfolio is leveraged with a low cost loan in euro in the 3% range,  the leveraged portion earns about 4.5% plus has the potential of a forex profit.

Leverage can also work against a portfolio in the downside… but in this era when bond yields are really low. commodity prices are very high and volatile… good value shares offer the best long term potential.  That potential can be enhanced with these really low interest rate loans and this creates a very powerful long term strategy.

Warren Buffet exemplified this fact at his 2012 annual meeting when he described investments in bonds as: “bonds are more like “return-free risk” than risk-free return”.

He also had a word about gold:  “Gold is a great thing to sew into your garments if you’re a Jewish family in Vienna in 1939,” said Munger, Warren Buffett’s long-serving No.2 at the $204 billion insurance and investment company, “but I think civilized people don’t Buy Gold. They invest in productive businesses.”

“I will guarantee you that farmland, over a hundred years, is going to beat gold, and so are equities,” said Buffett – now 81, and recently diagnosed with early-stage cancer – adding the caveat that “in any given one-year period, five-year period, any asset can outperform another asset.”

Good value equities have always offered the best long term value and when leveraged with low costs loans they can provide enhanced returns.

Join me with Thomas Fischer to look at how you can borrow weak currencies to invest into 2013 at our upcoming Super Thinking + International Investing and Business this October 4-5-6.