One problem in Western civilization is the high cost of medical care and the need for alternatives. 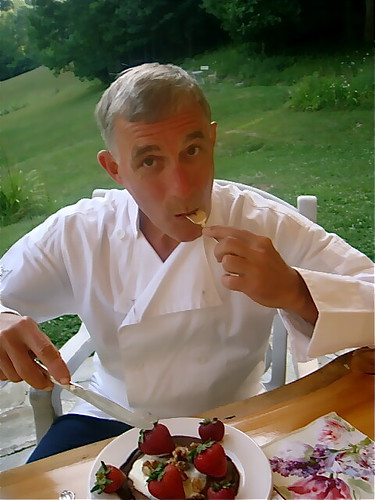 Quinoa…the superfood….here I am enjoying a quinoa strawberry shortcake.  (See the recipe below.)

This problem of high cost health care is likely to grow worse.

This is why we love quinoa.

The Western nutritional template is high glycemic.  We in the West are bombarded with food (and ads that lead us to them) that encourage hyperglycemia.  This fits nicely with a profitable economic model for food processing companies.  Starchy, sugary foods are typically inexpensive and they are addictive.  Our brain is smart. It wants lots of glucose. When we give it to the brain it becomes habituated and learns how to create chemistry so that our body demands more fast burning carbs.

One has to work hard in the West to avoid a high glucose diet.  Most stores and restaurants favor high glycemic food.   In short one has to go out of the way to avoid habit forming nutritional traps that a huge chunk of daily commerce is using to capture us.  The three main food groups of the West are sugar, grease and flour… liberally doused with caffeine!

Quinoa is a weapon we can use to beat  the high glucose attack.  The ideal combination in the human diet is about three parts slow burning carb… two parts protein and one part fat.  Most modern foods throw this off because fast burning carbs are cheap to produce… and create a demand to eat more and are habituating.  Protein is expensive to produce and satisfies so we eat less.  That’s good for the person but bad for the food business and most big food businesses are more interested in profits than their customer’s health.

Quinoa can replace flour… rice and corn… the holy trinity in the armory of the food producers glucose attack!  Quinoa can also be used to replace cereals and pasta.

Merri used a quinoa dressing for the past Thanksgivings turning the turkey stuffing from a glucose bomb into a protein treat.  On New Year’s Day we always follow a southern tradition to have the simplest of meals… black eyed peas… greens and corn bread.   According to southern custom, this brings prosperity for the year.

This year Merri made quinoa bread instead of corn bread. It was delicious and made this a much more balanced meal.

Since I have a sweet tooth I use quinoa to allow me to be naughty… but nice.

1 1/3 cups of milk (goat’s milk is also excellent)  Butter milk is traditional in the south.

Stir together and bake in a pie dish for 20 minutes at 350 degrees (or until brown on top).

Quinoa is high in protein… one of the only vegetable sources of a complete protein.

(If you have not read much about Omega 3… you should because there is a growing amount of evidence that an imbalance in the Western between Omega 3 and Omega 6  is leading to all types of problems including obesity.)

The excerpt below from an Economist article “Diet and the evolution of the brain-Fish and no chips” gives us some insights on this when it says:  To pin one big evolutionary shift on a particular molecule is ambitious. To pin two on it is truly audacious. Yet doing so was just one of the ideas floating around at “A Celebration of DHA” in London this week. The celebration in question was a scientific meeting, rather than a festival. It was definitely, however, a love-in. It was held on May 26th and 27th at the Royal Society of Medicine to discuss the many virtues of docosahexaenoic acid, the most important of that fashionable class of dietary chemicals, the omega-3 fatty acids.

DHA is a component of brains, particularly the synaptic junctions between nerve cells, and its displacement from modern diets by the omega-6 acids in cooking oils such as soya, maize and rape is a cause of worry. Many researchers think this shift—and the change in brain chemistry that it causes—explains the growth in recent times of depression, manic-depression, memory loss, schizophrenia and attention-deficit disorder. It may also be responsible for rising levels of obesity and thus the heart disease which often accompanies being overweight.

Michael Crawford, a researcher at the Institute of Brain Chemistry and Human Nutrition in London, believes, however, that DHA is even more important than that.

He suggests that it was responsible for the existence of nervous systems in the first place, and that access to large quantities of the stuff was what permitted the evolution of big brains in mankind’s more recent ancestors.

Indeed, Dr Crawford thinks that a shortage of DHA is a long-term evolutionary theme. The molecule is most famously found in fatty fish. He suggests this might explain why, for example, dolphins have brains that weigh 1.8kg whereas zebra brains weigh only 350g, even though the two species have similar body sizes. Furthermore, he argues that the dramatic increase of the size of the brains of humanity’s ancestors that happened about 6m years ago was not because apes came out of the trees to hunt on the savannahs, but because they arrived at the coast and found a ready supply of DHA in fish.

Joseph Hibbeln, a researcher at America’s National Institutes of Health, has been looking at the supply to babies of DHA from breast milk and at genetic variation in the ability to produce this molecule from other omega-3s.  In the case of those fed on formula milk low in DHA, though, children without the DHA-making ability had an average IQ 7.8 points lower than those with it.

Nor is intelligence the only thing affected by a lack of DHA. There is also a body of data linking omega-3 deficiencies to violent behaviour. Countries whose citizens eat more fish (which is rich in DHA) are less prone to depression, suicide and murder. And new research by Dr Hibbeln shows that low levels of DHA are a risk factor for suicide among American servicemen and women. Actual suicides had significantly lower levels of DHA in the most recent routine blood sample taken before they killed themselves than did comparable personnel who remained alive.

More worryingly, 95% of American troops have DHA levels that these results suggest put them at risk of suicide.

America’s department of defence has taken note. It will soon unveil a programme to supplement the diets of soldiers with omega-3s. The country’s Food and Drug Administration may change one of its policies, too. Thomas Brenna, a professor of nutrition at Cornell University, has written a letter (co-signed by many of the scientists at the meeting) urging the agency to revise its advice to pregnant and fertile women that they limit their consumption of fish.

They may, however, be swimming against the tide. The popularity of omega-6-rich foods based on cheap vegetable oils will be difficult to reverse. Indeed, if another of Dr Hibbeln’s studies proves true of people as well as rodents, it may be self-fulfilling.

In this experiment he fed rats diets that were identical except that in one case 8% of the calories came from linoleic acid (an omega-6 fatty acid) while in the other that value was 1%. These percentages reflect the shift in the proportion of omega-6s in the American diet between 1909 and the early 21st century.

In the 8% diet, levels of rat obesity doubled. It turns out that in rats (and also in humans) linoleic acid is converted into molecules called endocannabinoids that trigger appetite. Those who eat omega-6s, in other words, want to eat more food.

And since, in the human case, omega-6-rich food is much cheaper than omega-3-rich food, that is what they are likely to consume.

The way out of this vicious circle is not obvious. Eating fish is all very well, but the oceans are under enough pressure as it is.

Quinoa has been rated by the WHO as possessing protein of a quality similar to milk. It has been classified as a supercrop by the United Nations on account of its nutritional value and high protein content.   In early times, quinoa was cooked and ground to a paste and applied on bruises. Its medicinal uses ranged from treating motion sickness and appendicitis to bone problems and nursing mothers.  In fact a poultice of quinoa flour was applied on broken bones. It is a good source of dietary fiber.  Quinoa is ideal for those suffering from allergies to the grass family since it is a leafy grain and is gluten-free.

Quinoa is also a source of phosphorus, magnesium, zinc, copper and manganese, Vitamins B6, Niacin and Thiamin and has high levels of lysine – an essential amino acid for creating protein. Plus it is low in fat and excellent source of complex carbohydrates. 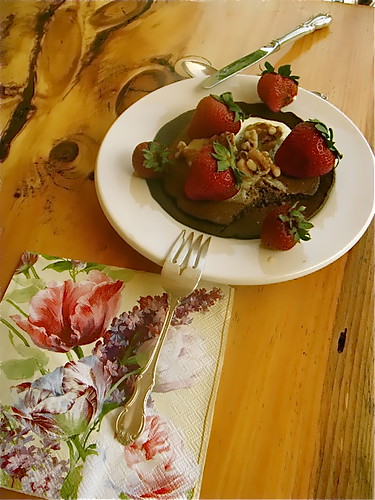 Below is a recipe for the quinoa strawberry shortcake that Merri made for me as well as the quinoa chocolate pancakes.

I photographed this before eating. Yum! 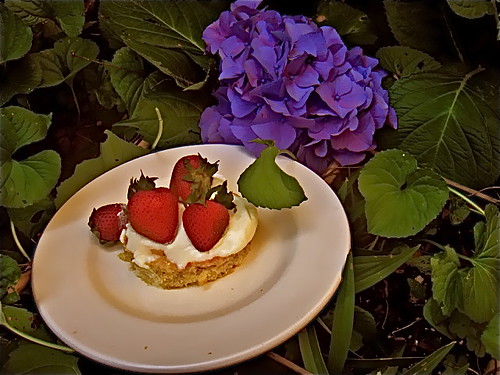 “Well, one of the problems that most of us have is Strawberries (yes!) but then we go a bit further and want Strawberry Shortcake.  Gary always steers me near those horrible little cakes when he has just been to the farmer’s market and bought luscious strawberries.  So, all I do when making almost anything with flour is to simply substitute fine ground (we do it ourselves in our blender) quinoa for flour.  However, this does change 1)the consistency of the batter (perhaps one needs to add more liquid) and 2)makes a firmer, stronger product no light and fluffy quinoa here! This might require a bit of change of expectations if one desires those little light airy concoctions…but think PROTEIN and low CARBS.

Cut butter into the dry mixture.  Mix egg with rich milk and combine with dry ingredients.  Bake 12 minutes or so until golden brown at 350.

Serve with strawberries and of course cream or whipped cream!”  Merri

Yes, it was wonderful…Sunday afternoon Strawberry Shortcakes with Tea.

See all of Merri’s quinoa recipes without pictures and other text here.

Also, we often fortify all of our pancakes, waffles, cornbread a bit further by adding an excellent source of whey powdered protein…this really brings up the balance of protein…and one feels very satisfied.