Investing in your experience and connections can make you rich.

How do we spot such connections?

See how to use connections from airlines to arts and crafts. 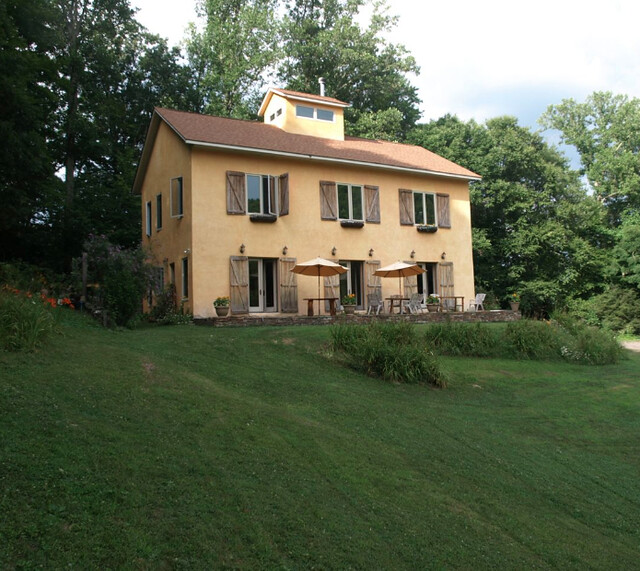 Here’s a connection I made on the front porch of  our Blue Ridge farm.

Looking at Jyske Global Asset Management’s latest  Market update entitled “Doom, Gloom and Profits“…  one wonders “Where can I invest?”   Here is an excerpt: Tuesday, the International Monetary Fund (IMF) cut global growth forecast from 3.6% to 3.5% and warned that the world economy is in a precarious state. The economy is being hit by a slowdown in the emerging markets and continued turmoil in the eurozone. The US is also showing signs of stalling growth, with falling retail sales down 0.5% from May to June and jobless claims jumping 34,000 to 386,000.

The world economy is now also being squeezed by rising energy and food prices. The price of oil has risen more than 10% in less than 10 days, due to heightened geopolitical tensions in the Middle East.  The worst drought in more than 50 years in the US has pushed the price of corn and soybeans to all-time high levels of USD 8.12 and USD 16.835 respectively.

Germany is being paid to issue bonds, as the yield on German two year notes fell to negative 0.074% the lowest yield since Bloomberg began tracking the securities in 1990. As the quest for safety and preservation of capital increases the number of countries with negative two year interest rates are rising. And now It also includes Denmark, Finland, Switzerland and the Netherlands.

Actually gloomy times  are ideal for finding the very best investments if we can spot trends.

Merri and I are always looking for contrasts and distortions that help me use our life experiences to connect dots and see future trends. 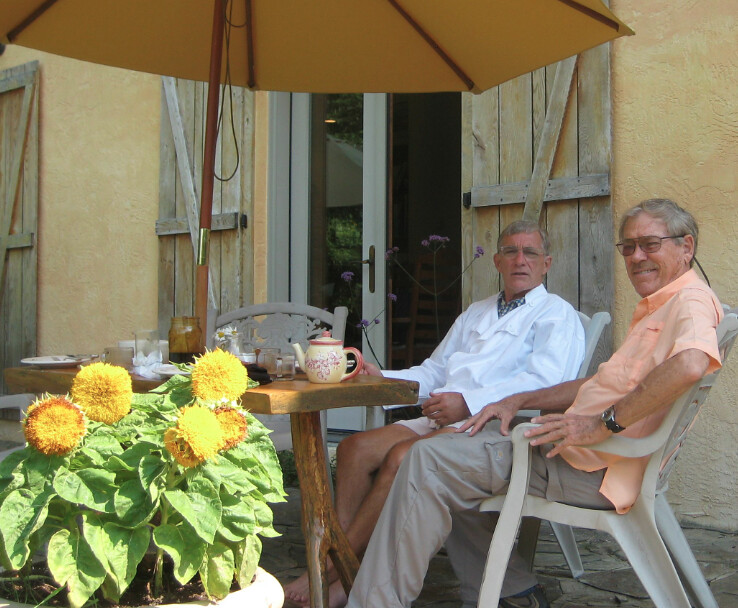 Bob Gandt and me.

Recently our friends, Bob and Anne Gandt, came up for a visit to our farm.  Bob is a very successful writer and has enjoyed great success by making history interesting.

We were having a breakfast of quinoa pancakes and Blue Ridge honey as we discussed ways to write better.   After the discussion I was reading one of  Bob’s great history books “China Clipper, the Age of the Great Flying Boats” and a quote jumped out. These words outlined a most unusual connection that changed the world in many ways. 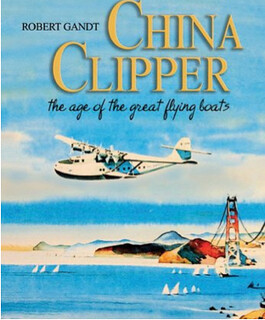 Gandt wrote in “China Clipper”:  The end of World War I was followed by two events that shaped the course of commercial aviation. The first was prohibition, imposed in 1919, casting its dry pall over America. The second was the sudden availability of war-surplus aircraft, including flying boats, suitable for conversion to passenger transports. Thus was provided both the need and the means for affluent pleasure-seekers to be flown beyond United States borders, to Cuba for their fun and spirits.

Order China Clipper at Amazon.com  I truly enjoyed this book.

Imagine that.  The end of a war and the end of freely available booze helped kick start something as important as commercial aviation.

I would have never guessed that.  However some people would have.   This is why we should all use some form of Super Thinking technique (or something similar) to stimulate our unique experience that reveal connections.

As unique individuals we each have special knowledge that gives us special insights into specific trends.   Often these are insights that no one else has.

Yet have you ever had an investment hunch that you ignored?

Next time you pass on an idea that made sense to you but not to anyone else, think twice.

Quantum scientists are quietly proving that intuition and prosperity go hand in hand. Studies in non-linear dynamics (also called Chaos Theory) suggest there is more to our gut feelings than we think.

These revelations into quantum thought show that Western thought processes fall short.  Take most Western investment and business planning as an example.  Western thought is usually conducted through a logical, linear progression that separates and catalogues all things. This process is flawed because Chaos Theory now tells us that reality is not linear. Nothing in the universe is separated from the whole.

Take the linear process of driving from home to work. Throw in a fender bender and you go places you would never expect.  Gandt reveals in China Clipper how the Anti Saloon League inadvertently helped launch a service that would dramatically change how we all live.

The quantum reality of investing and business is that the best laid plans are usually altered dramatically by small unexpected events. True wealth comes more easily if you blend intuition with your logic. The non-linear dynamics within us taps into infinite knowledge and makes connections our reasoning process cannot fathom.

An example of how chaos theory works can be seen by how our well being, lifestyle and wealth today are dramatically affected by a Dutch Man of War raid on one Portuguese cargo ship in the Malacca Straits in 1604.

This caused such an international fuss that the Dutch hired a man named DeGroot, to write a legal opinion to justify their actions. He created the concept of the Open Seas, stating they were free and no nation could control them (which the Portuguese had been doing).

DeGroot however carried on and wrote international law.  This created many concepts about injuries and laws that a Frenchman, Blaise Pascal, used to develop a system that explained how juries would act. This caused trouble. His thoughts on probability were frowned on by the church which was not a good thing in those days. He became associated with a freedom of consciousness group, the Jansenists. The Church in France attacked them seriously. They had to flee, hide or die.

One way Jansenists hid was in monasteries where they pledged silence and could only communicate with hand signals. One French Jansenist monk, Lipet, started a sign language school that became so successful it eventually gained endorsement by the Pope.

Then a rich American, Samuel Morse’s partner, Amos Kendall, became interested and gave enough money to start Gallaudet College, the first university to give degrees to deaf students. At this college a Scottish elocution teacher learned that he could teach deaf people to make sounds using this sign language. While this Scotsman’s son was teaching sign language to deaf people in Boston, he came across a French invention that allowed deaf people to speak down a horn. This caused a membrane to vibrate and traced a wiggly line on smoked glass, allowing the deaf to see the wave created by the sound!

The son suddenly had another idea. If one could speak down a horn and get a metal membrane to vibrate a bit of iron in and out of a copper coil attached to a battery, could it be possible to generate a wavy bit of electricity that would go down a line? This concept he dared would cause the reverse to happen at the other end and reproduce the original sound.

This son’s name, of course, was Alexander Graham Bell and these thoughts created the telephone.

These non-linear dynamics and those Dutch pirates created the telephone dramatically altering our lifestyles today.

But the pirate raid does not end its influence there. Those wiggly lines on smoked glass were turned into another phonetic code called shorthand by a devoted pacifist, Issac Pittman. He tried to use his phonetic short hand as a universal language to improve global communication and understanding. The idea created such a wave of enthusiasm that some governments gave grants for scientific studies of the idea.

One grant led to research studied by a fellow named Reynolds, who took this information and worked out formulas known as “Plates Reynolds Numbers”. These numbers were deeply studied by two brothers who ran a bicycle shop in North Carolina. Their names? Orville and Wilbur Wright. They used “Plates Reynolds Numbers” to fashion their airplane which was the first in flight.

That’s non-linear dynamics! This is why we need intuition to assure our wealth. Things do and will change in ways we cannot logically figure out. Yet we can indeed know and feel what is coming through our intuition.

Could our logic have told us in 1604 that a Dutch pirate raid would lead to the telephone and airplane? Probably no more than our logic could have deduced that prohibition would then speed up aviation. Perhaps not, but our intuition is connected to everything and it can be used more effectively when we learn how to unlock it.

We each know something special that no one else in the world knows in quite the same way.

Here is another example for those who enjoy arts and crafts… a doom and gloom classic.


If the global economy does slow way down many more will have free time and this can stimulate arts and crafts.   Hobbies can be enjoyable and generate some extra income being sold on eBay or at farmer markets and such.   This benefits companies like eBay and Michaels Stores.

Michaels  has 1,196 stores (consisting of 1,066 Michaels stores and 130 Aaron Brothers stores).  With $4.2 billion in sales in fiscal 2011, this is the largest arts and crafts specialty retailer in North America.  Michaels filed for an IPO in March of 2012 but like numerous other IPOs have held off after the Facebook IPO disaster.  Companies coming to the market do not want to sell their assets for too little but if the market continues to weaken firms like Michaels (which has a huge debt it is struggling with) may be forced to offer a good deal.

Those who know arts and crafts and buy in different types of arts and crafts stores may have special insights about this IPO that can help them take advantage of this fact.

Remember when all the news appears bleak… the best opportunities appear.   This is when our logic and intuition can be used to see connections that make us rich.

See how we use Super Thinking in our business and investing below.