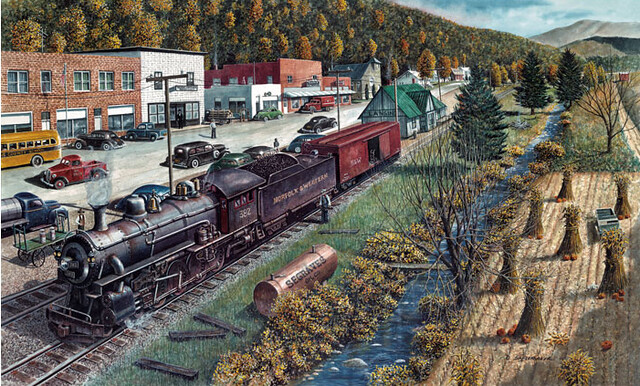 One of the great joys in Ashe County are the murals on many buildings… especially those of the old time trains painted by Stephen Shoemaker.  Ashe County’s economic rise was due to the “Virgina Creeper” a train which crept up the mountains to pick up natural resources from the mines and forest.

Stephen is a famous artist in this area (his web site is linked below) and this rendering depicts the Virginia Creeper standing in Lansing…  the town (of two or three hundred people) nearest our farm.

Every time I see those paintings I am reminded of the Great Train Robbery the name given to a 1963 robbery at Bridego Railway Bridge in Buckinghamshire, England.  Almost $6 million dollars was stolen.

How odd that such a paltry sum made the theft famous.  Trillions are being stolen in the Great Pension Robbery and not enough is said.

This three part series has looked at the three ways that pensions are being robbed.

The first chapter in this series The Great Pension Robbery reviewed the first way pensions can be robbed through underfunding from insufficient contributions.

This message shows how the purchasing power of pension can be robbed by devaluing the currency.

The great train robbery netted about 6 million dollars in 1963.  To get the same purchasing power today would require a theft of $90 million or more.

Pity the poor train thief who spends 50 years in jail and finds that his hidden money buys less than a 15th of what he expected.

Yet should pensioners be treated in the same way?  Should we toil for 5o years and then find that the promised rewards of our pensions are almost worthless?

This is a sad fact… the likeliest pension loss will come via global currency devaluation.

One way to protect again this loss is to have a multi currency portfolio.

We can watch for contrasts and distortions to spot currency trends that can equalize purchasing power. 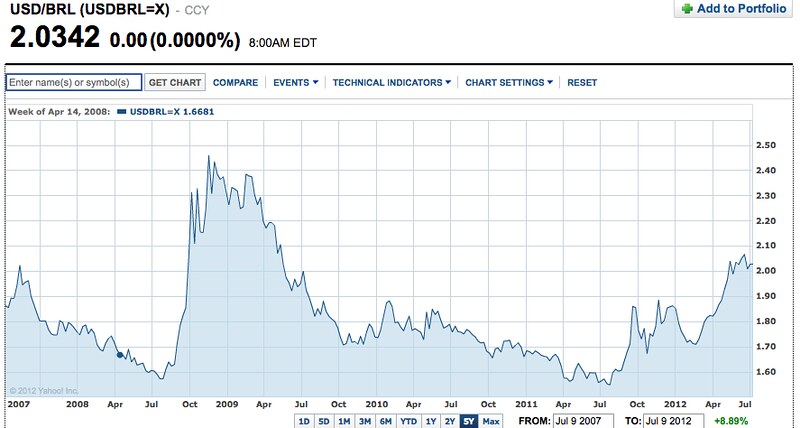 US dollar versus Brazilian real chart from finance.yahoo.com.

Morgan Stanley our other research partner is not convinced that the currency will appreciate that much so if you buy the bond it will be more of a currency speculation as the carry is 5.75%

Jyske estimated a 7% forex profit over a year.   They were wrong!  The profit boost came in six days!

On July 3, 2012 Thomas wrote again:  Hi Gary, The Brazilian real has appreciated almost 7% since we discussed the potential at your seminar. 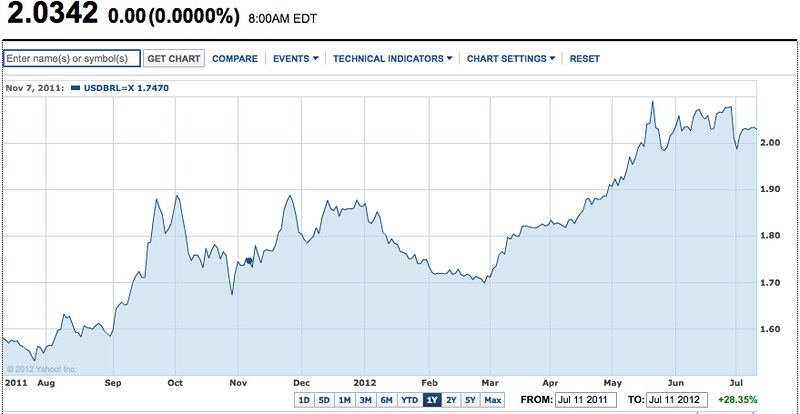 This profit had seemed obvious to me.   The factors that cause currencies to be weak or strong include government debt and budget deficit.  The US has a budget deficit of about 8% of GDP.  Brazil’s is 2.5%. 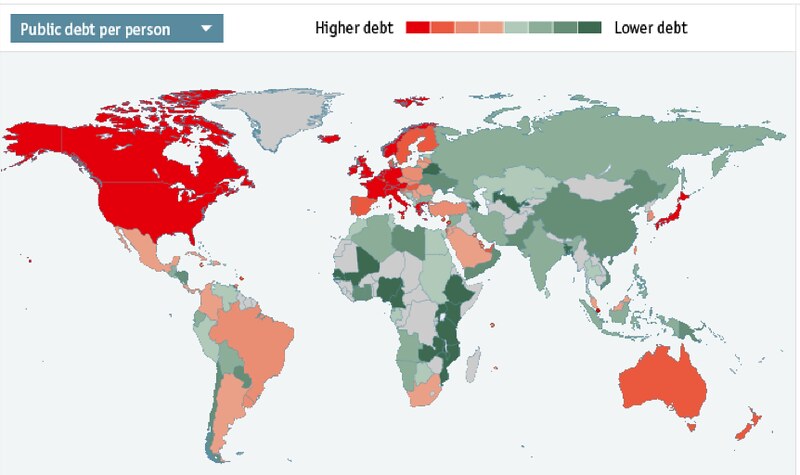 When you hold a multi currency portfolio over a sustained period, you gain a never ending series of forex profit opportunities.

Over the past five years Brazilian bonds returned as much as 14% and the currency rose and fell versus the dollar but in the end is almost where it began. Today Brazilian bonds pay 5.75% and are loaded with upwards potential.  There is a great chance that at some stage in the next several years the Brazilian real will jump versus the greenback.  In the mean time you can earn the much higher interest rate.

Here is our portfolio at JYSKE this time so you can see how we have spread out.


A multi currency portfolio is protection against pension robbery from devaluing currencies.

There is a a great chance that interest rates will remain low for some time.

The events of the week were central bank actions and U.S. job data.

Entering the week markets had already largely priced in further policy easing by the Bank of England (BoE) and the European Central Bank (ECB). Eurozone data showed that factory output remained weak, purchasing managers index remained in contraction area and unemployment had hit a record. Also, recent data had confirmed that the UK economy was sliding back into recession. Therefore, Thursday it came as no surprise that both the ECB and the BoE took action.
BoE expanded its asset purchase facility by British pound (GBP) 50bn to GBP 375bn, exactly as expected.

Surprisingly, the Spanish and Italian bonds reacted negatively on the rate cuts. The reason could be that the market now think it’s less likely that a third long-term refinancing operation is forthcoming.

What the market had not anticipated was an action from the People’s Bank of China (PBoC). Unexpectedly, PBoC cut its interest rate for the second time in the space of a month. Possibly, an indication that Chinese policymakers are concerned that the economy has not yet found a bottom.

In the U.S. there is also speculation that a central bank action could be coming in the form of a third round of quantitative easing (QE3). Lately, we have seen a weak report from the Institute of Supply Management (ISM), indicating the first contraction in manufacturing activity for nearly three years. Also, the non-farm payroll data released today showed 60,000 new jobs created in June compared to an estimate of 100,000. The initial market reaction was a weakening of the EUR vs. the USD which might indicate reduced expectations of a QE3.

For more information on how to develop a multi currency portfolio contact Thomas Fischer at fischer@jgam.com

These central bank actions suggest a slowing global economy.  This risk is further confirmed by a June 2012 article entitled “Everywhere you look, economies slowing” by Paul Wiseman of the Associated Press.

Here are some excerpts (bolds are mine): “The global economy’s foundations are weakening, one by one.  Already hobbled by Europe’s debt crisis, the world now risks being hurt by slowdowns in its economic powerhouses.

“The U.S. economy, the world’s largest, had a third straight month of feeble job growth in May. High-flying economies in China, India and Brazil are slowing, too.

“Since the global recession ended in 2009, the world economy has been fueled by rising powers in the developing world led by China, India and Brazil. Now, all three are running into trouble.

“China’s manufacturing weakened in May, according to surveys out Friday. Factory output was the weakest in three months.

“Australia and other Asian countries have come to rely on Chinese markets for their exports.

“India is suffering an even sharper slowdown. Its economic growth slowed to a 5.3% annual rate in the January-March quarter, the lowest in nine years. Output from India’s factories has declined. “Its consumers have seen inflation — which has averaged 9.2% a year since the start of 2010 — devour their wages.

“In Brazil, the economy practically stalled in the first quarter of 2012. It grew at just a 0.2% annual rate from the final three months of 2011, the government said Friday. That was below expectations of 0.5% growth. Flooding punished farmers.

“But Brazilian officials, like analysts in China, also pointed to another culprit, one that shows how problems in one part of the world cause problems in another: The ongoing trouble in Europe is taking a toll on exports.

“Fears of a global economic downturn have sent investors rushing toward the safest possible investments: U.S. and German government bonds. As a result, the interest rate on the 10-year U.S. Treasury note has hit a record-low 1.46% Friday. The rate on the German 10-year bond is even lower: 1.17%.

“Treasuries are at 1.46 because people are freaking out,” says Mark Vitner, senior economist at Wells Fargo Economics.

These reports suggest a slowing global economy.  The strategy for this is for governments to lower interest rates around the world.  The slow economies can hurt business so more pensions will go unfunded.   The lowered interest rates can further rob pension purchasing powers as returns fall well below estimated asset growth.

Finally the efforts to stimulate the global economy can greatly increase national debt worldwide.  This debt is pent up inflation.