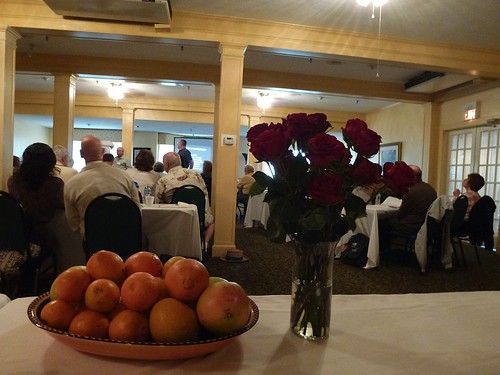 If you have missed the first five posts in the series they are linked here:

#4: Beating the Rose Colored Glass in the UK

The last message (#5) answered the question from a reader:  Gary, if Ecuador is so great… why did you move back to North Carolina?

We never left North Carolina so this question was moot.  The reader should have asked is why did we move back to Florida.   We had left Florida… but we moved back.  The reasons why may help you understand how to find your perfect lifestyle. 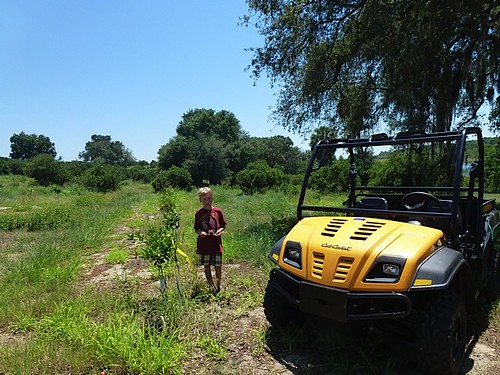 Our grandson, Garren, in our Florida orange grove.

When Merri and I first began living in Ecuador we had no grandchildren and my mom was doing fine.   Along the way Garren came along…  living in Florida.  Then  Sequoia and Teeka were born and live in Oregon.  then Tilly and Leo moved our grandchild numbers to five and they live in England.  Then mom (now 89) had some serious illnesses.  East West (North Carolina – Oregon – London)  began to compete with our north – south (North Carolina, Ecuador travel)  travel.  We are moving into our 70s and our rear ends that have been subjected to  millions of miles on jets already began to object a bit.   Plus Ecuador seems far away when that late night call requiring a rush to Oregon rings.

Lesson to keep in mind.  Don’t burn your bridges when you move.  Lifestyles change as life evolves. We have expected and now have a brisk business helping expats move everywhere.

Florida and North Carolina are nice central location for us to Ecuador, Oregon and England but there is another important Florida-Ecuador Connection.

Back in 2000 everything in Ecuador looked really bleak.  The country ran out of gas. All the banks shut down. There were demonstrations in the street.  A huge part of the population fled the country.

Having lived again and again in places where problems create opportunity… perhaps I look for trouble!   I began my business career  in Hong Kong in 1968.  There were communist riots and bombs being set off in the streets. The Chinese army was massed on the border. Life went on. We all figured out the fastest route to the British and American war ships in the harbor for a quick exit. We watched out for boxes in the street. Then we just got busy with life.  Those who stuck around and bought property and businesses made absolute fortunes.

Then I moved to London, a much quieter, safer, steadier place was expected.  Yet there were huge problems there.  The IRA started setting off bombs in the subway and around town.  They even shot some mortar shells at #10 Downing Street!  Ted Heath caused a general strike and the pound sank to $1 per pound!  The IMF was even needed to offer  economic support to bolster the pound.    I gathered my pennies and bought London real estate at the very bottom.  Those who joined me made fortunes once again.

Then during the 1980s US recession I jumped in again buying Naples, Florida real estate  that over the next 20 years skyrocketed… until it was so high… we exited. Proudly (lucky really) we sold our last properties in Naples in April 2007… just before the market began to crash.

The profits on these went immediately into more Ecuador property.

“Life goes on” is also a financial message.

If you have been in despair about our economy, you might be wondering if things can ever revive. Yes, they can and will! Life and business will be a little different, but mankind carries on. Living in the United States we’ll have to be a little more cautious but the western world will survive. Economies will continue to grow in an up and down way as they have for hundreds of years.

Once you believe this… you can see troubled places in a different perspective.

So when everything headed south and the economy tanked, I could not wait to get started in Ecuador.  Merri and I created an an active Ecuador business, plus began buying property.   We bought a 962 acre hacienda, condos in the mountains, a house, a hotel, a four story office building plus condos and apartments on the beach.

We began selling several Ecuador properties to plow back into the “Sunshine State.”

I believed in Florida for one of the same reasons I believe in Ecuador… sunshine… warm weather in the winter.  This is the Florida-Ecuador connection.

In addition as Florida real estate prices fell, Florida orange grove prices fell even further. Many groves had been purchased by developers who planned to tear them out and build homes. With a dead property market they were stuck with groves they wanted to unload.

This happened as food (including citrus) prices were rising!

We bought a Florida orange grove.

I also believe in Ecuador as one of the closest to Florida, practical, low cost places to live with something even better…year round great weather!

Most investors traditionally run from bad times!  But this very fact creates value investing opportunity. Few times has a real estate market been as badly hit as in Florida.   Ecuador real estate continues to appreciate as gringos leave the US and head for points south…but this part of the US south offers great potential now as well.

Our motto for decades has been the sun always shines somewhere.  However in Ecuador and Florida it shines more.

Here are several tips that can help expand the chances of a fulfilling expanded lifestyle.

#1: Expect the next boom.  Chicken Little has been around for  along time yet the sky has not fallen yet. For centuries… man’s material life has improved through a series of busts and booms.  We could consider busts as opportunities to gain in the next boom.

#2: Never say never.  Right now you may think “I’ll never come back”… or “I’ll never leave the new places where I am moving”.  Perhaps not… but then again something may come up that’s even better.  Do not close your mind to an even better lifestyle.

#3: Don’t burn bridges.  Keep your affairs in order. For example Americas still have to file tax.  Don’t miss doing this. Ecuador Living Club members can get in touch with a tax preparer who can help.  Click here.

#4: Expand your horizons.  If you move to a new place you’ll have new sights, smells, tastes, feelings and sounds.  This information will reform you and as a different, more experienced person you’ll have new opportunities to serve the world in new ways.  Expect to be able to have more because you can do more, because you will be more.

#5: Embrace change.  As a deeper, more experienced person you will see economic and social evolution in different ways  and you’ll have more ways to be engaged in the change a fulfilling way… so expect this benefit.

#7: Follow the Lead. This is perhaps most important of all.  The Western world mindset teaches us to project how we expect the future to be and if it is not… we are disappointed.  Everything really is in perfect order and we all have an important role to fill (and to be fulfilled).  If we follow the steps above and are open to new ideas… new possibilities and watch for opportunity that presents itself, this process we call life gives us extra depth, excitement, beauty, wonder and abundance.   All we have to do is be open, observant and obedient to our inner voice.

The next post in this series speaks about how we did even better by turning lemons into lemonade from larger lemons!

See how we can serve you in North Carolina, Florida and Ecuador.