Equity markets appear to be growing more toxic.  What a great opportunity this creates!  See a Singapore investing idea below. 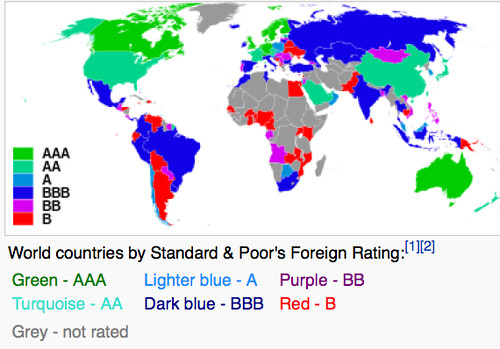 This chart from a Wikipedia entry (linked below) shows that there are few AAA rated borrowers left.

There are several reasons why equity markets have been falling … beyond global economic shifts… the European debacle… excessive government debt just about everywhere and the recent slowdown in US employment.

These factors are bad enough to cause a crash, but beginning in May we naturally expected a slowdown because May is the time of year when markets traditionally drop.

A statistical analysis was done some years ago by Michael Keppler. This study shows that most appreciation in most major equity markets, is achieved from the beginning of November through the end of May.

Michael wrote: “Gary, We have done extensive research on seasonality and I am proud to announce that a shortened version of a major study which I have coauthored with our Director of Research, Dr. Xing Hong Xue, will be published in the Winter Issue of the Journal of Investing. Our research shows that basically in all major equity markets, nearly all returns are achieved from the beginning of November through the end of May. All the best to you and Merri. Michael”
Keppler showed that over 30 years, the Dow grew 8.16% overall.
There was 8.36% growth in the months November through April.
There was 0.37 growth in the months May  to October.$100 invested in the Dow grew to $848 overall over the 30 years.$100 invested in the Dow grew to $1,067 if it were invested only in the months of November through April.$100 invested in the Dow dropped to $79 if it were invested only in the months of May to October. Historically the best five months with the greatest change of low growth began last month. There is no on-off switch I know of but we should be thinking more about risk aversion at this time of year.
Ruggie Wealth Management agrees.  My Florida neighbor, Morgan Hatfield, works for Ruggie Wealth Management in Central Florida and sends me regular updates.

Ruggie, like JGAM is a small firm (which manages hundreds of millions not billions) but has repeatedly been listed as a top wealth manager in numerous magazines including Registered Rep Magazine Wealth Manager Web,  Financial Advisor Magazine,  Worth Magazine and Barron’s.

I also pay attention to the data Ruggie sends me like this data Ruggie wrote (bolds are mine):

Judging by what’s happening in the bond market, it appears that some investors are more concerned about the return of their money than the return on their money.

When investors get nervous about the stock market, you often see money flow into the government securities of perceived safe haven countries such as Germany, Japan, U.K., and the U.S. This increased demand helps drive down the yield on their bonds. In fact, take a look at the following chart to see some amazingly low government securities yields:

Unfortunately, even the government securities of the “safe” countries may experience a loss in “purchasing power.” For example, with inflation running at 2.3 percent in the U.S. for the 12 months ending in April, investors in 10-year U.S. government securities may lose purchasing power since the yield is less than the inflation rate, according to the Bureau of Labor Statistics. On top of that, if interest rates rise over time, the bonds could experience a capital loss as the price of the bond adjusts to reflect current interest rates.

IF THE WORLD WAS A LAUNDROMAT, the U.S. might be the “cleanest dirty shirt”. As new signs point to a global slowdown, we’re on the lookout for countries that might hold up better in the rinse cycle and the U.S. could be that country, according to U.S. News & World Report.

The “cleanest dirty shirt” analogy comes from Mohamed El-Arian of PIMCO who says, “When you’re on a business trip that gets extended and you don’t have any more clean shirts, you wear the one that’s least dirty.”   In our case, you invest in the country that’s ‘least bad’.

‘Least bad’ may not sound like a great way to invest, but consider this. With the U.S. fiscal situation in horrible shape, you might expect investors to shun the U.S. dollar on fear the government will print dollars and reduce its value. Well, recently, investors have been clamoring to buy dollars. For example, last week, “The ICE dollar index, which measures the U.S. unit against a basket of major currencies, rose to 82.416 – its highest level since 2010,” according to MarketWatch.

In the dollar’s case, nobody is suggesting that, in isolation, it looks great. Rather, when you compare it to another currency such as the euro – which represents 17 countries in Europe – it looks relatively better because Europe’s problems seem more pressing than ours.

Just like taking a dirty shirt to the Laundromat to get it cleaned, investments over time may turn from “dirty” to “clean” as problems get worked out and situations improve. There’s money to be made during this cleansing cycle and we’re doing our best to “clean up.”

Learn more about Ruggie Wealth from Morgan Hatfield at mhatfield@ruggiewealth.com

Other banks hit by downgrades include Jyske Bank, Spar Nord Bank, Ringkjobing Landbobank and Sydbank.  Thomas and the crew at JGAM are great.  The rating downgrades are troubling. What are your thoughts?  Warm regards,

My reply confirms the importance of risk aversion and looking for value.  I replied:  The downgrade does not affect safety much if one is holding deposits less than 100,000 euros,  the amount guaranteed by the Danish government.

The Danish government’s credit is good according to this Wikipedia entry (linked below) its the 4th best in the world. 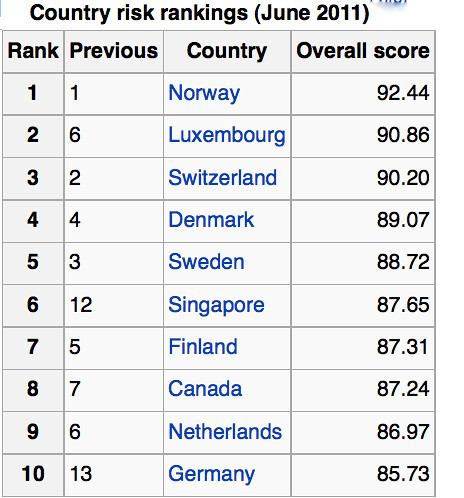 The high ranking along with Ecuador’s S&P B ranking (and a 5% tax on all money taken out of Ecuador) are why I invest in Ecuador real estate but do not keep much in Ecuador banks, stocks or bonds.

Investments shares, bonds and such held at Jyske are held on behalf of the investor and are not part of the bank’s balance sheet so the downgrading does not affect them.

Shares (I hold quite a few Jyske shares) and/or bonds issued by Jyske or large cash balances could be at greater risk.

Thomas Fischer at JGAM can tell you a more exact amount of the Danish guarantee at any given time.  Also Thomas has a nine page Moodys Credit Report on Jyske and a presentation on the strength of Jyske Bank that is very interesting.

Non US investors should contact René Mathys  at mathys@jbpb.dk

I have always liked the people in Jyske’s management, their modest budgets (no limos for the CEO here)…  their no bonus pay plan for staff and equal responsibility philosophy to look after employee – shareholder and customer.   This I believe reduces the risk of a gigantic JP Morgan type debacle and is one reason I remain a long term shareholder.

I tend to be a thematic investor taking long term positions that I do not alter unless the theme changes.  This is why I also hold shares in Unicredit.

The themes I am investing in are based on my belief that investors typically oversell bad news and that Europe will recover.

This idea is hedged with some shares (Jyske being one along with Axel Spring and Sky Deutsch) that earn mainly in North Europe.  The theme here is based on the chance that the EU will create two euros… the Euro Hard and Euro Soft.  Jyske, Axel Spring and Sky Deutsch are all companies where a big share of their earnings are in areas that would be in the hard euro (Denmark, Germany, Sweden, Netherlands, Finland are likely targets).

This theme is based on the belief that the troubles have made most European shares an extra good value  and European banks an even better value with the added boost of a potential potential Euro split.

I also invest in the themes of water… electricity… silver and commodities plus Singapore real estate.

Note that equities make up only 29% of my liquid portfolio and the other 71% are in bonds and this represents less than half of my total portfolio… the balance being in real estate.  In other words I am very diversified.

Other messages have noted that I am shifting towards agriculture and other basics as well… ie. water, food and shelter.

I rarely watch the price of the shares I hold. This in a way is laziness, but I like to think that my time is better spent on my own business where I have more control over events.

Instead I watch the themes.

On the theme of water, one of the shares I especially like (and have written about numerous times at this site) is Hyflux Ltd.  This is listed on the New York Stock Exchange with the symbol (HYFL.SI).

Hyflux purifies water with proprietary membranes.   They began with Chinese municipalities then switched their expansion to the Middle East.

As the Hyflux share chart shows the shares were hammered during the Middle East political awakening. 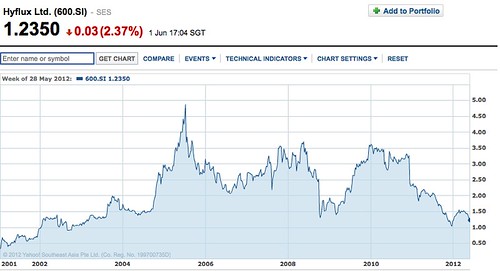 Did the need for water go away?  Did Hyflux’s management skills and decade of experience and contacts disappear?

Based on belief in the theme (water) and the company combined with the principle that investors oversell during times of panic, I invested in more Hyflux shares last June.  They rose 31.8% up to May 2012… plus paid a dividend.

OCBC cut its earnings forecast for Hyflux’s 2012 fiscal year by 14 percent and by 11 percent for 2013 on lower margin assumptions.

Due to the geographical switch in Hyflux’s order book profile to Asia from Middle East and North Africa, its gross margin fell to 38 percent in its first quarter from 51 percent a year ago, OCBC said.

This has pushed the shares down a bit again because Hyflux is doing the correct thing… diversifying back into China.

This is a formula I seek:

#1: Theme unchanged (there is still a growing water shortage).

Diversification is an important part of protection when markets are toxic. .

On the subject of toxicity numerous news stories that have reported  that Bluefin tuna carrying radioactive contamination from Japan have arrived at US shores 6,000 miles away. This  is the first time a huge migrating fish has been shown to carry radioactivity such a distance. 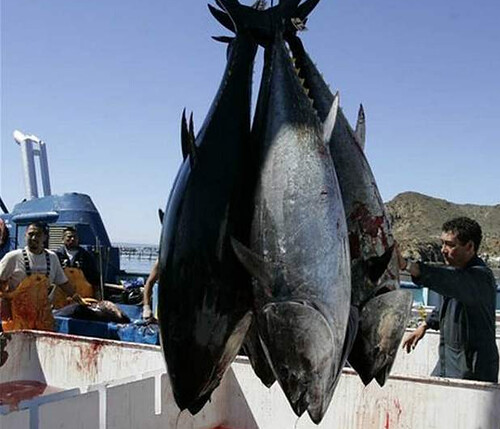 The article said “We were frankly kind of startled,” said Nicholas Fisher, one of the researchers reporting the findings online Monday in the Proceedings of the National Academy of Sciences.

Merri and I know a lot about the insidious effects of radiation as we suffered radiation poisoning from Chernobyl.   In this time of radiation awareness, we are being more careful.

I regrettably may know too well about the effects of radiation on health. Growing up in the 1950s and 1960s, I swam in the Columbia River every summer day, not knowing (according to the Washington State Department of Health) that for more than 40 years, the U.S. government produced plutonium for nuclear weapons at the Hanford Site so until the 1970s, the Columbia River “held the distinction of being the most radioactive river in the United States”.

Then Merri and I were exposed to excessive doses of radiation from Chernobyl.  Added to this and/or regular, frequent air travel for decades our health suffered.

Our report “Protect Against Radiation” shows seven ways we regained and even improved our health.  Order this report here $4.99.
.
Gary
.
Thomas Fischer of JGAM will join our delegates at the June 2012 Writer’s Camp to help them learn how to invest better as well as gain global economic background for better writing perspective.   Plus he will be speaking at our North Carolina leaf change October 5-6-7 Earning With Quantum Thinking in a Micro Businesses seminar.

If you are diversifying abroad see this unique condo in San Vicente with views across the Chone of Bahia asking $50,000 negotiable! 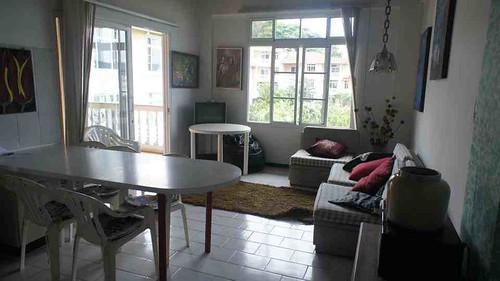 ← Townhouse on Ecuador's Coast For Sale Self Publishing Lesson 20 →