How You Learn Best Test

See a test below that can help you understand “How You Learn Best.”

Having just spent nearly a month with two of my newest grandchildren… I can see why so many people have problems learning Spanish… or learning anything for that matter. 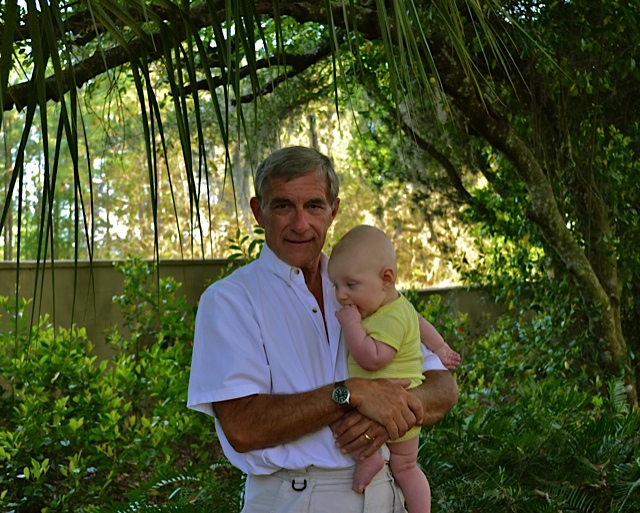 Here our grandson, Leo, is teaching me about how to learn via his … everything in mouth trial and error technique.

This is why we have been increasing our focus on Super Thinking + Spanish through Frequency Modulation where delegates learn Spanish in just three days.  (See our upcoming May courses in Canada and Mexico).

Super Thinking is the important part of this course.  Learning Spanish in such a short time is the tool that proves what a powerful shift in learning that Frequency Modulation can create.

Of course learning Spanish is useful because Spanish it is the third most spoken language in the world. (According to the Krysstal site)

And of course it is especially useful in North America because such a large part of the Spanish speaking population is nearby in the faster growing portions of the Americas. 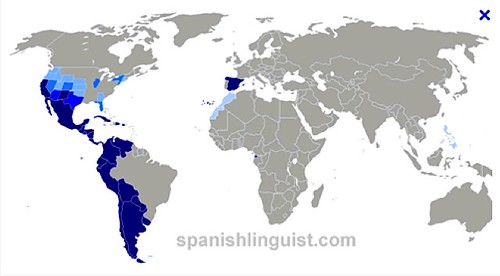 Countries in dark blue are Spanish speaking. The light blue shows where Spanish is most important.

How is it possible to learn Spanish in just three days?  This note from a delegate at our last Super Thinking + Spanish course  helps explain how this is possible.

Hello Merri and Gary,  Just had to express my wonder and pleasure coming from the Super Learning and Super Spanish class in Mount Dora;  it was absolutely fantastic!!  You both have such a wealth of knowledge and expertise, I feel fortunate to have found you; I really mean that.  Someone said “When the student is ready, the teacher will appear”.  You appeared.

I have been amazed at how my head keeps pulling up the correlations we learned.  Every time I see words I’m trying to put them into Spanish.

I did have the opportunity today on a flight to experiment some with a Brazilian lady.  We each caught a few words.

I am saying all the English words, then repeating them in Spanish as we did in class.  I have a home in Mexico where I will be able to do a lot of practicing in May.  There is a gardener who has always tried to communicate with me; I will be practicing with him and the maid, then on to the “streets”!  My granddaughter also was tutored for a year in Mexico; we will be conversing also.  I’m very excited about this.

The July Writer’s Camp in July will be as good I know.

(now as you said – these two sentences may not be completely correct, but I know you will know what I’m saying…and that’s all we really want to do!)

This is the key to learning Spanish in three days.  The course gives delegates the ability to communicate in Spanish so they can create sentences every single day.

A study for the CIA on how to help people learn second languages showed that the key to learning was “the willingness  to speak a language even though one was bad at it in the beginning”.  In short  those who learn the fastest and the best were those who applied trail and error to learning a language.

Enter Leo and Matilda our grandkids. Dada.  Maa Ma.  Is this perfect English?  Not a bit but do you think it will communicate?   Mom and dad will go bananas when they hear this first attempt to communicate.

The willingness to speak a new language even though not perfectly is the key to learning.   Plus what is perfect?  As languages evolve,  isn’t it a bit silly to worry about perfection when “How R U” and “TQ” (Thank You) and “cool” “awesome” “I am 4 U” and other such short cuts are now accepted forms of communication?

The cool awesome thing about Super Thinking + Spanish is that it prepares you to communicate in just three days so you do not sound bad at all.  Your three day Spanish is very eloquent and allows you to apply trial and error after the course in three different ways… speaking words you read and hear in your lessons…   creating Spanish sentences that get your point across mentally in a technique we call “detouring” and by creating sentences daily. When you memorize a sentence you quickly forget. When you create a sentence, it is yours forever!

There is a fourth dimension to learning that every person can apply differently depending on how they learn so we want to share the test below.  It can help you understand better how you specifically learn but first may I remind you that at the root of all scientific discovery is trial and error.

Trial and error IS the root of all scientific application… so much so that many higher education facilities now teach improved problem-solving skills in special events such as the Science Olympiad  as explained (linked below) at the New Mexico Tech a scinece and engineering research university.

Application of problem solving skills as a long term endeavor.
Education is the importance of trial and error.
Emphasis on experiences rather than memorization.

In Part 3 of the Self Improvement 101 course by David Riklan at that site says (bolds are mine):

Part 3:  How to Immediately Determine Which of the Top 3 Learning Styles Will Work Best for You – by David Riklan says:
Today’s section (Part 3) focuses on the different ways in which we learn.  By figuring out your most appropriate LEARNING STYLE(s), you will be able to determine which type of self-help you’re best suited for.

The three major learning styles defined by psychologists include:

You’ll certainly be able to learn more effectively by understanding which learning style works for you.  But don’t believe that you’re limited to just one!  In fact, mostly all of us use a combination of styles.  It is important, however, for you to be part of an environment that makes the most of your learning ability.

VISUAL LEARNERS (approximately 65 percent of the population) This type of learner is best at collecting information with their eyes. This includes looking at visual images or reading text.  Visual learners usually prefer graphics, illustrations and charts.  They are able to remember details and ideas in picture form, typically what they’ve seen before.

AUDITORY LEARNERS (approximately 30 percent of the population) This type of learner is best at collecting information with their ears. This includes listening and talking.  Although easily distracted, auditory learners learn by memorizing sound.  For instance, they learn instructions by repeating them over and over again, even in silent form. They often like background music to block out interrupting noises.

KINESTHETIC LEARNERS (approximately 5 percent of the population) This type of learner is best at collecting meaning through touch and movement.  Kinesthetic learners learn through physical interaction; most are young children.  In essence, touching is a way of seeing.

So, which of these three styles is most effective for you?  If you’re not sure, here is an exercise to help.  Read through the following examples and note down how many apply to you personally.  By counting how many check marks you have in each category, you can determine the type of learning that is right for you.

—Reads or watches TV to relax.

—Tends to remember people’s faces but not their names.

—Gets distracted by untidiness when concentrating.

—Learns about a new idea by reading the book.

—Attempts to spell a difficult word by writing to see how it looks.

—Solves problems most easily by writing out possible solutions.

—Listens to music or the radio to relax.

—Tends to remember people’s names but not their faces.

—Gets distracted by noise when concentrating.

—Learns about a new idea by purchasing the audio tapes.

—Attempts to spell a difficult word by sounding it out.

—Solves problems most easily by talking through possible solutions.

—Does a physical activity or plays a sport to relax.

—Tends to remember people by recalling things he/she did with them.

—Gets distracted by moving people when concentrating.

—Learns about a new idea by going to the seminar.

—Attempts to spell a difficult word by writing to see how it feels.

If you have a high score for visual learners, then I recommend you utilize visual presentations like illustrations, slides and videos. If you see that you are more of an audio learner, then audio sources like tapes or lectures will suit you best. If you happen to fit under the kinesthetic category, then a kinesthetic or hands-on approach to learning will help.

Certainly it is possible to score evenly across all three.  This shows that you are able to learn well using either the visual, audio or kinesthetic learning styles.  Congratulations!

The knowledge you gain about yourself from this test can help you improve your ability to learn through trial and error.

In these times of rapid change… this ability to keep abreast and get ahead of change can be the most effective step in moving forward in any career or situation that you desire.

Learn how to use Super Thinking to earn through writing at our two new Writer’s Camps.

See more on the how you learn at Selfgrowth.com