We Wait for Pain

We do not have to wait for pain as we age.  I’ll explain why in a moment.

First, let me point out that the sentence “We Wait for Pain” shows why learning Spanish may be easier than you think. 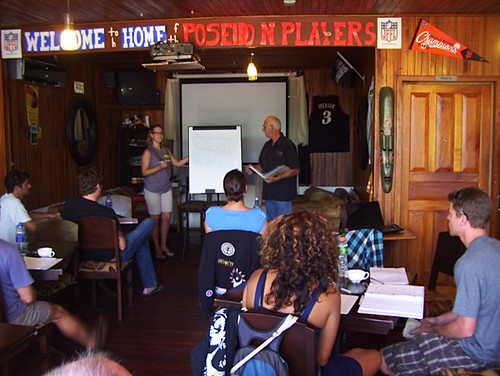 This sentence “We wait for pain” shows one reason Spanish is so easy to learn.  In Spanish there are hardly ever confusing words that sound one way but are spelled another.  Even better there are no words that sound the same but are spelled in a totally different way and have a completely different meanings.   “We wait for pain” could be “Wee Weight Four Pane”.

Spanish is a phonetic language.  There ya go.  Another example.  Even the word phonetic makes no sense phonetically.  This word should be spelled “Fonetic”.  In fact in Spanish it is… “Fonético”.

However there are more important reasons “Beyond Simple” to know Super Thinking + Spanish and why a micro business teaching Spanish offers incredible opportunity “Beyond Money”.

The excerpt below from the New York Times article “Exercising an Aging Brain” by By Denise Grady shows that teaching is an exceptional career “beyond the money” because it slows mental aging!

Here is an excerpt from the article (bolds are mine):  MORE and more retired people are heading back to the nearest classroom — as students and, in some cases, teachers — and they are finding out that school can be lovelier the second time around. Some may be thinking of second careers, but most just want to keep their minds stimulated, learn something new or catch up with a subject they were always curious about but never had time for.

For many, at least part of the motivation is based on widespread reports that exercising the brain may preserve it, forestalling mental decline and maybe even Alzheimer’s disease and other types of dementia.

“When you and I are having this conversation, you’re taking notes, thinking, remembering pieces of it, trying to relate it to other things,” said Arthur Toga, a professor of neurology and director of the laboratory of neuroimaging at the University of California, Los Angeles. “You’re changing the circuitry in your brain. That is because you have changed something in your brain to retain that memory.”

Dr. Toga elaborated: “The conversation requires nerve cells in the brain to fire, and when they fire they are using energy. More oxygen and sugar must be delivered, by increased blood flow to those regions.

“Why would that be good? If you are vasodilating, delivering more blood to certain regions of the brain, that is important. It increases the longevity and the health of those circuits. In adults, if I ask you to perform tasks you’ve never done before, the amount of brain it takes for you to try and do it is far greater than the amount of brain it takes for you to do something you’re already good at. So yes, exercising the brain is good.” Playing video games probably qualifies as a type of brain exercise, he said, though older people might not sharpen their skills as fast as younger ones do.

But research continues. Dr. William Jagust, a professor of public health and neuroscience at the University of California, Berkeley, said there were two main theories that tried to explain why exercising the brain might make it more resistant to disease.

One is the “cognitive reserve” theory, which says that if the brain is in the best possible shape with extensive neuronal connections from being used a lot, it may be able to withstand the onset of Alzheimer’s disease for a while and symptoms may take longer to develop.

A hallmark of Alzheimer’s is deposits in the brain of an abnormal form of a protein called amyloid.

“A paper we published showed that people who were more cognitively active over their whole life span had less amyloid,” Dr. Jagust said.

“A variety of things is important,” Dr. Toga said. “We try to encourage people to do certain things because it couldn’t hurt and may be good. Retaining lots of social interaction is really important. It involves so much of the brain. You have to interpret facial expressions and understand new concepts. If you want to learn to ride a monocycle or do acrobatics at 75, it’s probably not a good idea. But exercising more geography in the brain, I think that’s important.”

Few activities are as socially interactive as teaching!  This does not mean we should wait until we are old to teach.

The same article also said:   “My interpretation is that people who are more cognitively active have more efficient brains,” Dr. Jagust said. “What seems to happen in aging is that older people seem to have less efficient brains.” A scan of brain activity on a 20-year-old being asked to remember something will show less activity needed than in an 80-year-old asked to perform the same task.

“Older people seem to activate or bring on line brain areas that young people don’t use,” Dr. Jagust said. “They have to work their brains harder. So people who stay cognitively active may use their brains more efficiently.”

That way, they may generate fewer amyloid deposits. But he emphasized that being mentally active throughout life — not just in old age — was what mattered.
“It has to do with lifelong patterns of behavior,” Dr. Jagust said. “We tend to focus on what people do at 75 in terms of dementia. But there is more evidence that what you do in your life, at 40 or 50, is probably more important.”

This era of rapid change makes it harder to earn a good living and enjoy life.  Standardization… globalization and growing population puts stress on so many. We call it the rat race… a never ending struggle where the treadmill continually accelerates.

This stress and the unraveling of the social pact… mean that money… savings… investments… pensions and  Social Security are becoming less and less dependable.   The only real assets are a keen mind, dependable body and an ability to serve.

This is why teaching is such a great way to serve.  In this information era… few things are as valuable as knowledge.  Plus the process provides freedom and helps us remain mentally active.

Whether you learn to teach Super Thinking or not… learn to teach something.   This is a good way to return some of the blessings we have all received and  we gain more than money.   We may gain mental clarity and much more.  One Super Thinking + Spanish teacher who just completed his first course (which allowed him to spend the winter in South America and earn while there) summed up the greatest benefit perfectly when he wrote.

“Although drained and tired yesterday from three days of being “on”, today I feel very buoyant and charged up from the joy and positive feedback I got from the delegates.  Along with their progress from no Spanish to speaking before my very eyes, I can report to you in all honesty the feeling I have being part of their progress is simply intoxicating.  I understand now why you and Merri do what you do very well indeed.”

New Teacher Aid Program.   There is a new way to learn how to speak Spanish in three days FREE as a Teacher’s Aid.  See details here.

Change.  We fear it. We resist it and we can let us ruin our lives. Yet without it… our existence would still be in caves.   As change speeds up we can embrace change and retire from the rat race.  For mental stability… the sooner… may be the better so we do not have to “wait for pain as we age”.  Hoo kneads the weight of waiting inn are thyme???