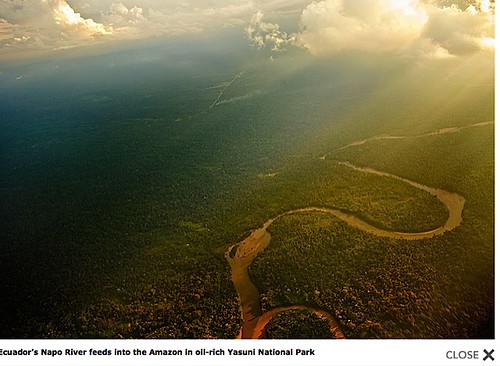 A February 2012 Times article “Rain Forest for Ransom” by Bryan Walsh outlines the importance of Ecuador’s environment in the Amazon. Here is an excerpt from that article (bolds are mine):   Yasuni National Park — a 10,000-sq-km reserve on the western fringes of the Amazon basin — is indeed a paradise, considered by many scientists to be the single most biodiverse spot on the planet. But it’s a paradise in danger of being lost. Oil companies have found rich deposits beneath the park’s trees and rivers, nearly 900 million barrels of crude worth billions of dollars. That’s money that Ecuador — a small South American country in which a third of the population lives below the poverty line and petroleum already accounts for more than half its export revenue — badly needs, money that oil companies and consumers will be only too happy to provide if drilling is allowed to go forward.

If Ecuador follows the usual path of development, that’s exactly what will happen — with disastrous consequences for the park. “Yasuni is a truly unique place in the world,” says Gorky Villa, an Ecuadorian botanist who works with the conservation group Finding Species. “Our concern is that it will be ruined before we can even understand it.” (See photos of the polluted area in Ecuador.)

But there may be another way. Ecuadorian President Rafael Correa has told the international community that his country would be willing to forgo drilling and leave Yasuni largely intact in exchange for donations equal to $3.6 billion over 13 years, or about half the expected market value of the park’s oil deposits. The plan — known as the Yasuni-ITT Initiative, after the name of the reserve’s oil field — would conserve Yasuni’s unique biodiversity and prevent the emission of over 800 million tons of carbon dioxide, an amount equal to Germany’s annual greenhouse-gas footprint. The Yasuni plan would be a first for global environmental policy: recognition that the international community has a financial responsibility to help developing nations preserve nature. “Oil is by far the most important part of Ecuador’s economy,” says Carlos Larrea, a professor at Andean University and a technical adviser on the Yasuni project. “But we are willing to keep that oil indefinitely unexploited if the international community contributes.”


Of course, from another perspective, the Yasuni initiative might look like environmental blackmail by Ecuador: Pay us or the forest gets it. And since the proposal was first floated a few years ago, Ecuador has struggled to get international partners to sign on, in part because momentum on climate policy has ebbed in the face of the prolonged global economic crisis. Nor does it help that Correa himself has sent mixed signals on the project, simultaneously preparing for drilling even as he asks for donations. (Read “Can Ecuador Trade Oil for Forests?”)

There is, however, no ignoring the essential justice of the plan. If we all really do have a shared stake in the natural heritage represented by hot spots like Yasuni, then we have a shared responsibility in helping a poor country preserve it. “We need these resources to develop the country, but we’re also responsible people who want to protect Yasuni,” Correa said in New York recently. “If the poor don’t receive direct benefits from conservation, conservation won’t be sustainable.”

For the past decade Merri and I have participated in protecting the Amazon rain forest in an economically viable way and just a decade ago we financed an Amazon camp for a small indigenous community.   Here is an excerpt from an article posted at our website after we took our first (and regretfully only) group to this camp in 2002. The  February 2002 article is entitled “Amazon Story”.

This tells of the camp we financed in the Amazon to help the indigenous avoid selling out to big oil. 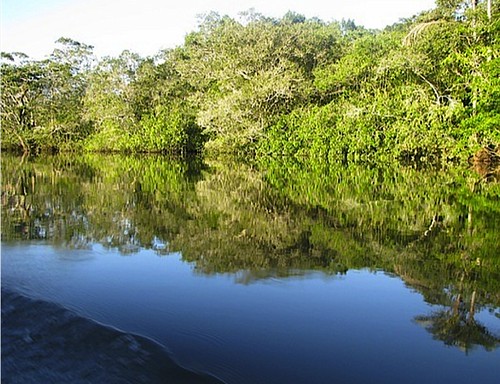 Ecuador is the second largest oil exporter in South America and its economic plan for the next five years is based on doubling its production of the black gold.

Oil has been the nation’s short term economic salvation, but this is the reason we are here as well because this same oil also creates huge ecological problems, destroys rain forests, pollutes streams, etc.

One way of combating this problem has been the creation of numerous huge eco-reserves and we headed for one of the largest, the Cuyabeno (good man) Reserve, 2,700 square miles of deep jungle rainforest that is highly protected.


This area has been created to conserve the fauna and flora and meet requirements so the native inhabitants in joint administration with the government can continue to live, as they always have, here.

The preserve is set into two areas, the first is open to tours through just six tour operators and three lodges of which our lodge is one. (Merri and I are have such a belief in this project that we have financed and implemented it for them). No one except the indigenous are allowed into this area unless with one of the tour guides.

“Land of the Siona-Secoya”. This is what the lodge is about, its revenues are used in part to help support this tribe, building schools, providing basic needs and trying to stop the encroachment of western civilization so this community can live as they have for so many generations before.

A Kingfisher (a sign that the environment is clean- as they cannot stand pollution) landed on a red plant that the native guide tells is a contraceptive used by the locals. They boil it for two days and drink a cup a day to prevent unwanted childbirth. Yet the community here needs kids, only 43 remain in the community.

Giant fish roiled in the water. Ara Paima (tarpon) are one of the major food sources for the natives here. They are caught by trolling with a small fish until the tarpon is attracted. Then one fisherman uses a small canoe and detachable harpoon that hooks a strong line into the fish, leading to a long, exciting ride and finally dinner for many. Pirannahs and catfish also frequent the river and will add to our daily fare while we are here.

After about two and a half hours of this jungle canyon, the first of three lodges appeared. Our lodge is deepest in the jungle so we journeyed further before we arrived.

The stilt lodge is hidden in the jungle and approached by steps up from the river and a boardwalk through vine-covered jungle that leads to a thatched covered tee shaped building surrounded by jungle green.

The next morning after a breakfast of tropical delights, we boated to an obscure path, climbed out and hiked to the village of the Siona-Secoya that we protect. Our partnership with this community began after the village Shaman, Aldemar, saw our partner (Santiagio Guamani) in a dream as the man who would help his people. 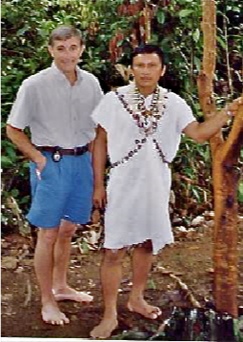 Regretfully that part of the Amazon was closed shortly after that first tour, so we donated the camp to the Ecuadorian tour operator (who was seen in a dream by the shaman) who could continue taking Ecuadorians there.

This is why we were delighted when our friend, Kjetil Haugan, purchased La Selva Lodge in another accessible part of the Amazon so we can sponsor camps there. This area is deep in the protected Amazon and is a pristine delight…we treasured our times in the Amazon and were so happy to introduce this excellent lodge and trip!

The first camp will be a Amazon Spanish camp conducted by Glenn Sterling.

Glenn just sent us this note which shows the beauty of clear skies and environmental cleanliness in Ecuador.

The Skies Over Ecuador

Ecuador had 4 distinct regions and of course, skies to match each.  Galapagos, Pacific coast, Andes, Amazon (not the bookseller).

I haven’t been to the Galapagos, but I have been to a lot of the rest of Ecuador.  Here are some of the images my camera took that you may easily see.  I’ve also included some of the Ecuadorian airborne – by this I mean birds and such.

One of the most glorious aspects of the Ecuadorian sky is cleanliness.  You know you’re breathing good clean air, either from high altitude or from lack of pollution.  A little bird told me. 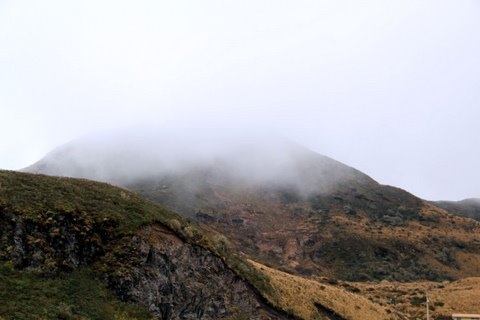 Sky over the Amazon headwaters – a cooling, refreshing rain falls most afternoons for minutes. 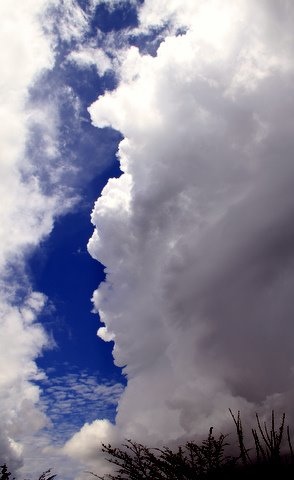 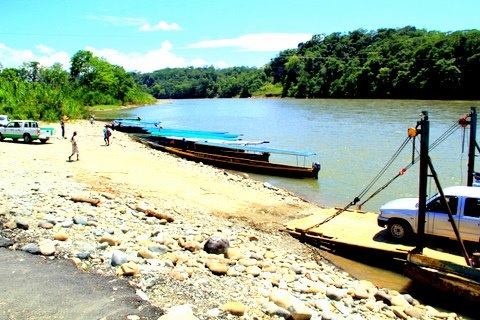 An exquisite butterfly alights on a plant at a cocoa farm outside Tena. 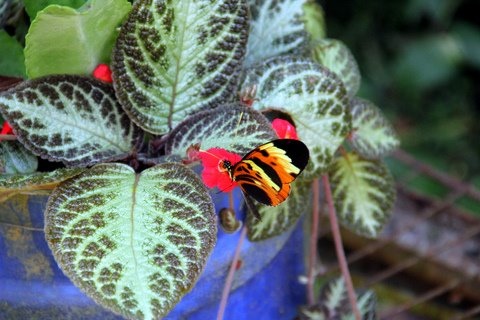 Commonly called a parrot, this Macau joined us for breaky at our hotel in Puyo. 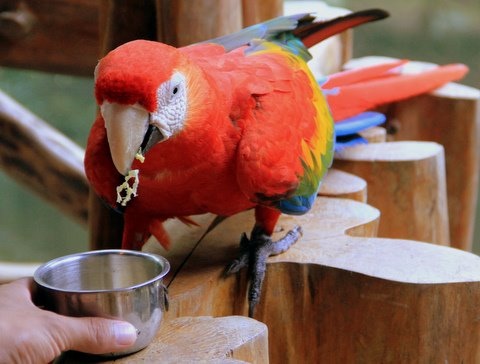 Above Banos, the live volcano Tungurahua creates its own cloud. 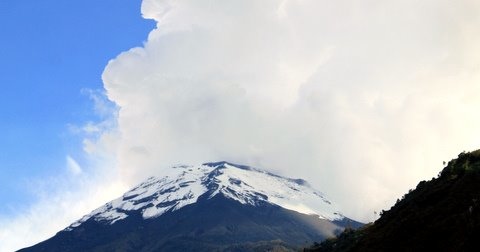 Rain threatens the Andes cordillera lasting about 20 seconds with a bark much worse than its bite. 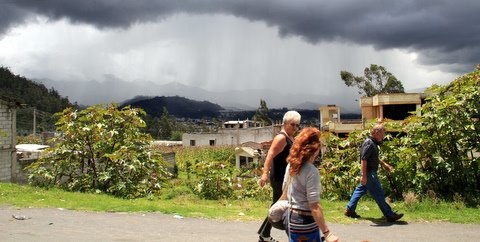 This colorful Parrot patrols the animal shelter at Cotundo guarding its entrance. 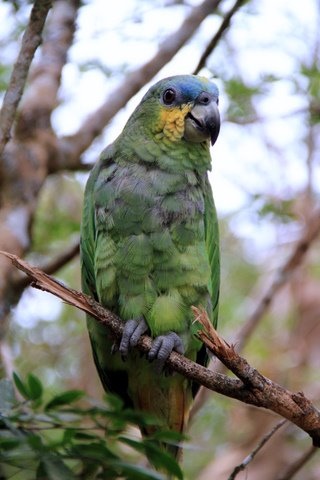 Near the coast about 2 miles from San Clemente daily colorful skies amaze everyone.

Join Glenn Sterling for photos and a once in a lifetime Amazon adventure that helps protect the rain forest environment as you learn Spanish in four days. March 2-6.