Generic Hate – Your Choice Should be…

That’s correct, Your choice… should be your choice… not a choice imposed by someone else upon you.

We all know the downside of choices being removed by the penal system.  We all hate the thoughts of jail.

Yet the majority allow themselves (even pay for the privilege) to be mentally jailed through a system I call generic hate created by the mainstream press. 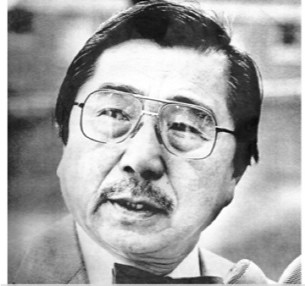 Let this man explain why we should not worry too much about generic hate using an example of the Ecuador Iran connection.

Recently a reader sent this note:  I was shocked to see news that Amadinajad will soon visit Venezuela, Cuba, Nicaraugua and Ecuador. I have to cross Ecuador off my list of countries of interest after learning that.

Hopefully my reply puts some perspective on this.

There are many many reasons why someone might choose not to go to Ecuador.


The visit of two politicians trying to get the attention of the US government should not be one of them.

Because only you can determine if any one place is right for you, we always recommend you visit first, rent second and finally after you really feel settled in… if you still love being there, buy and become a resident.

I first warned readers about the Iran Ecuador connection almost two years ago.


Please note that the the focus of our articles… is to help readers have alternatives… because no one knows how the world is going to unfold.

One seminar delegate recently told me how he searched the world for a perfect pristine isolated place in North America away from dangers and pollution.  After years of effort he found what he felt was perfect and settled there… only to be directly in the path of radiation and one first to see Japanese flotsam from the Tsunami wash up on its shores.

No one knows how the world is going to unfold.

Ecuador is only a part of our business.  We were there most of the time for 15 years and have not been regular lately  but not because it is a bad place.  Nor did we go to Ecuador originally because we thought America and Europe, where we lived then, were bad places.


If you choose to avoid Ecuador by all means do so.  But do it for the right reasons.

The establishment always uses local press to create enemies to shift the national focus away from their own problems. This I think we can all agree is a time honored political tradition.

We do not care where anyone goes… our mission is to help our readers think for themselves beyond the daily press and to embrace change and make decisions that are best for them based around their own personal circumstances.

If one followed the press in the 1950s they feared Russia (and Cuba).  Then China was the bad guy (now the good guys despite continued human abuse) and then Vietnam… then Iraq…  then Afghanistan.  Now it looks like Iran is bad while China, Russia and Vietnam are great places to invest. Cuba will be the next good guy!


So over the past decades if you lived by the press and cut yourself off of every country that was visited by leaders of China, Russia, Vietnam and Cuba, you missed some great opportunities.  I know because I was among the first Americans in China. This is another reason why we have helped organize the first Super Thinking + Spanish course to be conducted in Cuba for Canadians and Europeans.

Am I correct?  The New York Times has just announced that National Geographic is hosting tours for Americans to Cuba.

So don’t people who did not come to Ecuador because Fidel Castro was there a few years ago feel silly?


Imagine how we would have been the bad guys if we did this a few years ago!  Now some Americans are making fortunes taking Americans on tours to Cuba because the State Department gives them permission.  The government in Iran may be hostile to the US… but for all we know those Latin visits could be engineered by the CIA to get the Latins to tell Iran to back off.  I do not know that this is the case but this is the point… we do not know, do we?

So most of the people in the world seem to have three important things in common.  #1: We are all great and wonderful.  #2: Mankind being what it is power corrupts so we are all caught in a terrible system.  #3: We are all pretty disgusted with politicians.

The problem is the daily press stimulate generic hate to such a degree that we miss so many wonderful things and people.  We hate Chinese. We hate Russians. We hate Cubans. We hate Iranians.  But really we are all the same… great people caught in the grindstones of a nasty system that we can do little about.


If one lets the daily press choose your friends and enemies and guide your life…  one will always be caught in the messes of the masses and miss so much opportunity, great people and wonderful stuff.

Let your inner wisdom and the personal details of your life and your innate intelligence lead you instead.  Follow the feelings of what you love. Go to your desires rather than away from your hates and fears.  You’ll find more satisfaction, fulfillment and success!

Regards and good luck wherever you go.

Are you leaving North America because you feel civil rights are going to be thrown out the window.  Forget about it. They have been gone for decades.

This photo of from a January 5, 2012 LA Times obituary by Elaine Woo entitled “Gordon Hirabayashi dies at 93; opposed internment of Japanese Americans”.

Gordon Hirabayashi, who was convicted for defying the evacuation and internment of Japanese Americans on the West Coast during World War II and, four decades later, not only cleared his name but helped prove that the government had falsified the reasons for the mass incarceration, has died. He was 93.

Civil rights often get thrown out the window.  This does not necessarily make a place or the people bad.

For example no one has recently written to me about my residence in North Carolina and explained that they’ll never go to that state and that North Carolinians are bad.

Here is an excerpt (bolds and underlines are mine).  Living people who were forcibly sterilized as part of a decades-long eugenics program in North Carolina should receive a one-time payment of $50,000, a state task force recommended on Tuesday.

North Carolina sterilized an estimated 7,600 people between 1929 and 1974, many of them against their will.

The state apologized for the sterilizations in 2002, and Gov. Bev Perdue created the compensation task force last year. Many states once had eugenics programs, and seven have apologized, but North Carolina is the first to consider paying victims.

The five-member task force – including a doctor, lawyer, historian, retired judge and retired journalist – met for 10 months and has a February 1 deadline to send a report, including recommendations for compensation, to the governor.

Even deciding how to make up for the eugenics program is no easy task. Historians and experts on compensation say there are no comparable examples to model monetary reparations after. This is a far different situation than better-known reparations debates, such as slavery, for which no compensation has been awarded, or the Nazi Holocaust, which is tied to individual awards allotted after an extensive documentation process. The closest example, experts say, is the 1988 decision by the U.S. Senate to pay $20,000 to Japanese-Americans who were held in internment camps during World War II. Surviving victims were paid the flat fee for the suffering caused by displacement.

Steven Selden, a University of Maryland professor and author of the book “Inheriting Shame: The Story of Eugenics and Racism in America,” said the national eugenics movement was about altering the gene pool and eliminating people who spoke, looked, or behaved differently. What set North Carolina apart was how recently it occurred: Most states stopped after World War II, but North Carolina continued sterilizing people into the 1970s. 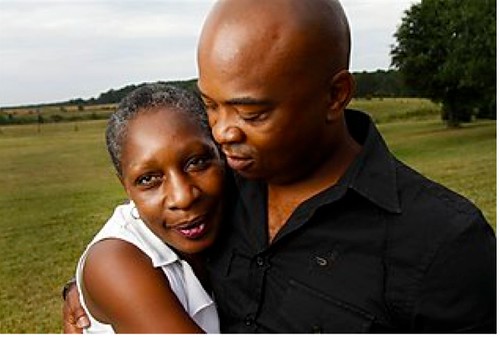 Caption: In this June 22, 2011 photo, Elaine Riddick and her son Tony Riddick embrace as they pose for a photo before testifying before the Justice for Sterilization Victims Foundation task force compensation hearing in Raleigh, N.C. Riddick is fighting for compensation from her native state of North Carolina over her sterilization as a young girl.

This seems unimaginable.  Yet an August 15, 2011 ABC article by Allen Breed entitled “Eugenics Victim, Son Fighting Together for Justice” says:  Elaine Riddick’s small frame heaves, her rapid, shallow breaths whistling in her throat as she forces the words out between her sobs.

“So what am I worth?” she asks the five people seated at the long table before her.  “The kids that I did not have, COULD not have. What are THEY worth?”
“Priceless,” Tony Riddick whispers as he gently rubs his mother’s back.

Elaine Riddick has been asking these same questions, in one forum or another, for the past 40 years. This most recent appearance in late June was before the Governor’s Task Force to Determine the Method of Compensation for Victims of North Carolina’s Eugenics Board.

As far as Riddick is concerned, she tells the panel, she was raped twice. Once by the man who fathered her son, and again by the Eugenics Board of the State of North Carolina, which deemed her, at age 14, unfit to procreate.

“I am NOT feebleminded,” she shouts, turning to face the packed hearing room. “I’ve never BEEN feebleminded.”
“No,” says her son, standing beside her behind the podium.


Tears streaming down her face, she says, “They cut me open like I was a HOG.”

I do not worry too much about what politicians say.  Their words and actions are victims of the fears and worries of the total population… at times.

At times politicians take advantage and stir up fears and worries.   Such stirring can lead to a suspension of American rights that seems quite unbelievable… such as in North Carolina.

Yet I can assure you the people of North Carolina nor the state itself are bad.  The state is wonderful… the people fantastic!  Nor are the Ecuadorian people or the country of Ecuador a bad place because a leader from Iran visits there.

A visit by a politician from a country that US politicians say is bad is not a good reasons to dislike or avoid another country.

Our site is about how to have alternatives.  Ecuador is one of many. So is North Carolina and Florida and I predict so too will Cuba be… soon.

Choose or reject any of them by all means.   Just make the decision for the right reasons.

Politicians will use external events to collect the votes and/or support of their public. Expect USA – Iran tensions to grow as the November elections approach.  Don’t let this distort your view of what is really important for you.

A concept I outlined in my first 1970s book, Passport to International Profit  remains my mantra called the  “Six Point Command Posture” which is to:

Learn how to develop this tactic so you can choose to live, earn and invest where it is best for you at our February 8-11, 2012 Super Thinking + Business and Investing seminar in Mt. Dora, Florida.

← Ecuador Beach Condo Rental Opportunity Are We 52 Days From Disaster? →